Maybe it was the Halloween season, or the full moon, or just because he could. Presented by Cal Performances, pianist Louis Lortie’s recital Sunday at Hertz Hall was composed of works having something to do with diabolical virtuosity. Among the spooky stuff covered, there were two corpses, a fantastic imp, things that go bump in the night, and, to top it off, Chopin’s “Funeral March” Sonata. Altogether, this was an admirably adventurous program, not for the faint-hearted, and yet, for all the brilliant playing, more sedate than I had imagined it would be. 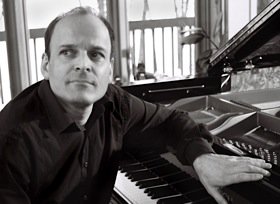 Schumann’s Nachtstücke (Night pieces), originally titled Corpse Fantasy, certainly did not seem to warrant such a ghoulish title. I tried to imagine what the composer might have meant by it, and all I could come up with were the windy passages in the third piece, hauntingly played by Lortie, which may or may not have been blowing over the grave. Composed the year after Chopin’s Sonata, which was reviewed in Schumann’s magazine, Zeitschrift für Neue Musik, Schumann may have been thinking of it when he composed the marchlike dotted rhythms of the first movement. The dotted rhythm returns in a much gentler guise in the final piece, though you wouldn’t have known it from Lortie’s overly fussy and strict rhythm, which contained more rigor than mortis.

Ever since Paganini, it has been thought that virtuoso performers had some link with “dark powers” — that they were sorcerers who were somehow in league with the Devil. Ravel’s Gaspard de la Nuit (roughly translated as “The prince of darkness”), three pieces based on ultraromantic poems by Aloysius Bertrand, goes all out in an attempt to stimulate the diabolical instincts of the performer and raise gooseflesh in the listener. For extra atmosphere, a completely darkened room with a few candles is ideal, but a flashlight will do. In concert, the flood lamps focusing on every detail of the music tend to take away the shadows and thereby the frisson that Ravel took such pains to evoke.

I felt that the Naiad Ondine’s Song would have built much more slowly and inexorably if the seeming thousands of watery 32nd notes had not been placed so much to the fore, obscuring the fact that this is a slow piece. The heartbreaking moment when the accompaniment stops, and we hear how slow it really is, came almost as a relief. It was the performance’s most telling moment.

Although it’s simpler than the outer two pieces, the central panel, “Le Gibet” (The gallows), brings no relief. The repeated B flat functions as a pedal point throughout, like a tolling bell, while the massive, shifting, chordal passages marked ppp represent the swaying of the corpse in the afternoon sun. Placed in balance, these elements evoke death’s indifference, lacking any trace of sentimentality. The climax is a haunting passage containing a single line, played (as the composer indicates) without expression. Once again, faced with a simple passage, Lortie evoked the grisly scene perfectly.

Too Much of a Muchness Ravel was probably the French composer most influenced by the brilliance of Liszt’s piano music. If Ondine is Ravel’s Waldesrauchen, then Scarbo is surely his “Mephisto” Waltz. And, like that battered warhorse, it can suffer from too much of a good thing — in this case, speed and volume. The impish Scarbo begins more imaginary than impressive, gradually taking on monstrous, perhaps even gigantic proportions. The playful episodes call for a lighter touch than Lortie exhibited.

The dynamics that Ravel marked are crucial to the pacing of this climax, like a leap into the abyss. Only toward the end of the piece does Scarbo truly terrify us, as when the main theme, once underscored by the composer with the words quelle horreur, reappears for the third and final time, before disappearing like a candle being snuffed out. Somehow, after all the dazzling passages that seem to go beyond the powers of mortal pianists, something must be held in reserve. Here, even Louis Lortie seemed to have exhausted his resources, and it was as if the mask was removed — and, instead of the Gaspard de la Nuit, what we got was Caspar.

In following Ravel with another nocturnal masterpiece, Lortie was nothing if not daring. Elliott Carter’s Night Fantasies, which some call his masterpiece for piano solo, typifies Romanticism in its sense of mystery, the music emerging from darkness and returning to it. In a single movement, lasting more than 20 minutes, the work explores a “period of wakefulness at night ... when our inner life is not dominated by strong, directive intentions or desires” Composed over a quarter century ago when Carter was in his 70s, Night Fantasies seems a work of youth, in its daring, passionately expressive content. Now in his 100th year, Carter continues to add new works to his large and challenging creative output.

Night Fantasies doesn’t have a program nearly so graphically defined as Ravel’s, but it does have a progression from its tranquil opening through many episodes of changing character, building to an overwhelming climax before fading out — just as Scarbo does. Carter likens its constantly shifting moods to Schumann’s Kreisleriana. These moods go from the flickering and mercurial to various kinds of recitative (indicated to be played angrily at times), but these passages serve to highlight the long melodic lines of changing and overlapping speeds that give the music its lyricism and fantasy. Like all great Romantic works, Carter’s music has an emotional content that informs all diverse rhythmic and harmonic techniques that can make this music seem forbidding. A listener must remember that even Clara Schumann waited more than 30 years before she would publicly perform her husband’s First Piano Sonata, after having played it privately for many years. Bravo to Louis Lortie for daring to perform a modern Kreisleriana in his recitals.

The Chopin Sonata No. 2, the concluding work, sounded like a classic, if not a warhorse needing no comment from posterity. Lortie correctly played the repeat of the exposition, following the advice of Charles Rosen to go back to the first bar instead of what you find in most scores. By that point, the audience had overcome its fear of death, or anything else, several times over. Still, the glimpse we had of Paradise that we received in the middle of the “Funeral March” came as a moment of true communion between audience and performer, not to be found in a recording. I found myself wondering what it would be like if the rest of the program had sounded so simple and so right.