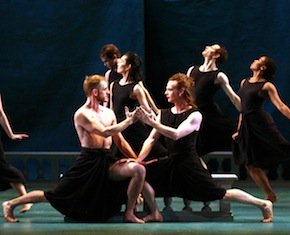 Mark Morris' Dido and Aeneas was a treat for both eye and ear in its return to Cal Performances Friday night in Berkeley's Zellerbach Hall. The star of the performance was Morris, the choreographer and conductor. Of course, it helped that the performers were his own superb Mark Morris Dance Group, the Philharmonia Baroque Orchestra, the Philharmonia Chorale, and excellent vocal soloists. Henry Purcell's wonderful music was well served.

The large ensemble numbers, featuring the entire dance company and the Philharmonia Chorale, were marvelous. The choreography brings to life specific musical phrasing and vocal effects — arms and fingers trilling and feet as percussion instruments — and the singers and dancers were such a tight ensemble that the effect was that of seeing music as we heard it. The first and last scenes framed the opera's narrative with lovely ensemble scenes, inventively designed and beautifully executed, as striking gestures of arms and legs rippled across the stage.

Morris has specified that the roles of Dido and the Sorceress be taken by the same dancer and the same singer. It seems he has taken his cue from the opening scene, in which Dido is dithering about whether her attraction to Aeneas poses too great a risk to her position as Queen of Carthage, and the women of her court assure her that he is true, and that their union would be a good political move, uniting the realms of Carthage and Troy. So she takes the plunge. The Sorceress perhaps represents her doubts, and the risk she takes does in fact lead to her own downfall.

Originally, Morris danced the two roles himself. He has since given the roles to other male dancers, and in this performance it is danced by a women, Amber Star Markens. When Belinda sings, "Pursue thy conquest, Love - her eyes confess the flame her love denies," Merkens didn't quite confess Dido's love in her face. But her dancing was spectacular, in both roles. In most performances of Purcell's opera, some decision has to be made as to exactly how and when Dido dies. Is it suicide? If so, by dagger or poison or what? Or does she die of a broken heart? I lean toward the broken heart theory, combined with a proud queen's conviction that she has compromised her position and has nothing left to live for. In Merkens' performance, to see Dido slowly dancing, as she died, to the beautiful strains of her famous Lament, was a moving experience. Stephanie Blythe's singing of both roles was stellar.

Aeneas was danced vigorously by Domingo Estrada, Jr., and sung by Philip Cutlip, who gave touching expression to the scene in which Aeneas believes he must follow the will of the gods and resume his voyage, forsaking the queen whom he loves.

Maile Okamura danced Dido's sister, Belinda. She was given some particularly delicious circular moves, especially in the opening act, and did them to perfection. Yulia Van Doren sang Belinda, and Céline Ricci was second woman (danced by Rita Donahue). Both sang well, and both doubled as witches.

Tenor Brian Thorsett sang the Sailor Song, and Lauren Grant was the dancer. Her enthusiasm as a sailor was matched by two male dancers who were having a good time being witches, Noah Vinson and Dallas McMurray.