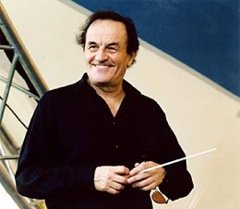 The Royal Philharmonic Orchestra, as its name might suggest even to someone unfamiliar with it, is from Great Britain. To a concert at Berkeley’s Zellerbach Hall on Saturday, it came with Artistic Director Charles Dutoit, who is Swiss, and guest pianist Jean-Yves Thibaudet, who is French. The music they played was by composers who were German and Hungarian. This mixture might have pleased the eclectic mind of the late Sir Thomas Beecham, the colorful conductor who founded the orchestra in 1946.

The German half of the program was the Symphony No. 1 of Johannes Brahms. This was presented like the granitic slab it is, albeit a slab with interesting coloring and shaping. In their lower registers, the strings interwove their lines with a strong assurance evocative of bands of color running through rock. The confidence of Dutoit’s conducting here, especially when he turned to the right where the lower strings sat, reminded me that earlier in his career he was a violist. Unfortunately, the orchestra’s weakness is a lack of solidity and a harshness of tone to the sound of the violins in their upper register. The brighter tuttis did not always have a completely ideal mixture of sound.

The wind ensemble at moments merged with the strings, and at others stood out separately. There are some highly distinctive players here, not deficient; they just take some getting used to. The sound of the horns is watery — backup from the brass helped a lot — and the oboes are individualistic and quacky. Both features might actually do well in certain pieces of French music. They’re much more unusual to hear in Brahms. 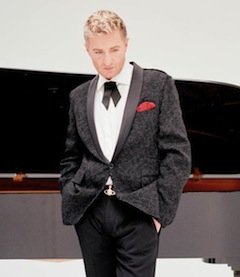 I prefer, though, to forget that and think of this performance for those strong lower lines of the strings, and for Dutoit’s shaping of the work as a whole, always lean and flowing, and comprehensible in scale, despite its size and heft.

The Hungarian half of the program offered works of a markedly different character. Zoltán Kodály’s Dances of Galánta is based on Romany melodies and offers bright orchestral colors in the shape of a Hungarian rhapsody, a slow beginning which takes off with vehemence later on. Despite its dissimilarity both in shape and sound from a Brahms symphony, the Royal Philharmonic played it in rather the same manner, with Kodály’s intended blazing conclusion coming off more full of determination than fire. And, as in the Brahms, while the higher violin reaches tended to the harsh, the lower-pitched string passages were mightily strong and clear. The players followed Dutoit’s rhapsodic tempo variations with perfect unity and elegance.

Thibaudet appeared as soloist in one of those florid, flashy works he specializes in, the Piano Concerto No. 2 in A of last year’s bicentennial composer, Franz Liszt. This too is a rhapsodically-shaped piece, consisting of one long movement in six sections of varied character, with the feeling of a hidden story-telling motive behind it, as in one of Liszt’s symphonic poems.

Here Zellerbach’s peculiar acoustics made their most dire impression of the evening. Seated in the pit of the hall’s main floor, I would have thought from the booming, echoing sound of the piano that I was actually located somewhere inside the instrument’s case. The orchestra seemed accordingly all the more distant. When the piano traded rumbling figures with the cellos, the power lay all on one side. Like other virtuoso pianist-composers, Liszt is fond of making his pianist sweat inaudibly during loud orchestral passages. Here, Thibaudet was audible: It was the orchestra that had more trouble making itself heard.

None of the acoustical overweight of the piano sound could disguise the dedication that Thibaudet brought to his performance. I might in an unguarded moment remark that concertos like this and the Saint-Saëns Fifth, which he has also been playing with the Philharmonic on this tour, are fluff. Thibaudet is here to make the case that this music really matters. Liszt was a forward-looking composer. His concerto, which was completed in 1849, features fresh premonitions of the musical clichés of the next half century, and even longer if Hollywood counts.

So with the significant weight placed on Liszt’s concerto, and the strong, sober air given to Kodály’s dances, the British, Swiss, and French performers proved that the Hungarian half of the program could stand respectably next to the traditionally weighty Brahms German half. Equity was achieved, and Beecham’s ghost was, I hope, pleased.