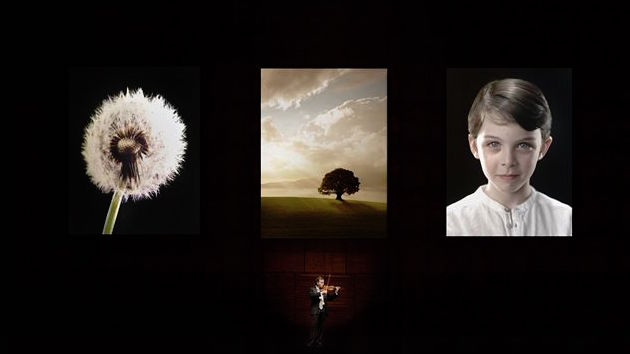 “Bach is so charged — with other composers, audience members would bristle less.” So said artist David Michalek about his creation of slow-motion projections to accompany Gil Shaham’s performance of Bach’s Six Sonatas and Partitas for Solo Violin, hosted by Cal Performances on April 14. Indeed, it’s difficult to imagine that any visual art could substantially augment Bach’s music; often, accompanying imagery simply distracts.

But instead, Michalek’s projections ingeniously combine contemporary ways of seeing with scenes out of the Dutch Golden Age of painting. There are cherubic children, birds, and still lifes, complete with skulls and other symbols of mortality. Many of the scenes feature dancers, sumptuously clothed in velvet and taffeta. Reduced to impossibly slow rates, their smallest motions assume significance. 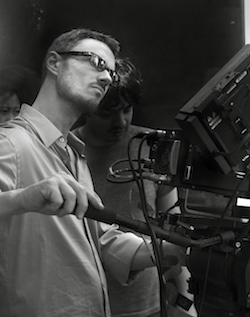 Michalek was an English major when he began working as an assistant to fashion photographer Herb Ritts; two years later, he landed an ad campaign for Calvin Klein. This background in portraiture continues to inform his work, even as he develops this new method — which he calls “moving images” — of capturing motion in film.

Indeed, these moving images are not garden-variety slow films. When a simple gesture — such as the outstretching of an arm — takes several minutes to unfold, details of beauty emerge. A stiff skirt crinkles as it turns, wisps of hair suspend in the air.

“I was looking for a story,” Michalek said of the Bach works, “and I found one.” Recently, some musicologists have traced melodic references in the violin works to existing religious music, inferring that the three partita-sonata pairings represent the Christmas story, the Passion, and Pentecost. Michalek’s imagery draws upon a secular version of this trinity: birth, death, and rebirth.

Domestic scenes characterize Birth (the G Minor Sonata and B Minor Partita). Time suspends as a mother and child gaze adoringly at a new baby; a girl pours a seemingly endless stream of water into an overflowing cup. For Death (the A Minor Sonata and D Minor Partita) the video disappears, returning just in time for the monumental Chaconne. Here, petals flutter to the ground as a dancer gestures with fans, the long sleeves of her kimono trailing full minutes behind her arms.

For the two works representing rebirth — the only ones in major keys — Michalek’s imagery becomes dynamic. Dancers’ motions quicken; two young violinists — one wearing a headscarf that recalls Girl with a Pearl Earring — mug at the camera. In the C Major Allegro, a bouquet is saturated with water until it collapses. For the final piece of the set, the E Major Gigue, this same video plays in reverse: Water zooms upwards until the bouquet is restored. It’s deliciously silly, yet also deeply joyous.

Joyousness, above all, characterized Shaham’s performance. Playing with a Baroque bow, he adopted some period elements, double-dotting rhythms and favoring first position fingerings (even in the first bariolage passage of the E Major Preludio!). Most impressively, he added embellishments not only on repeats of binary-form movements, but also in the busy fugues. Yet he also used a considerable amount of vibrato and freely adapted the bowings of Bach’s autograph. His sound was sustained and powerful (he plays the 1699 “Countess Polignac” Stradivarius). 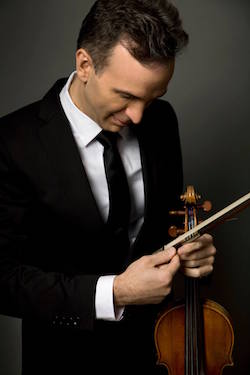 Most striking was Shaham’s pacing. As the films broke down simple gestures into hundreds of sub-movements, Shaham’s playing did the opposite: By performing each movement at a brisker tempo than is conventional, he highlighted the larger harmonic progressions that are often obscured by the details of so many notes.

Although the G Minor Fugue could have benefited from a more restrained approach (it’s difficult to make the melody line speak in a chain of triple-stops played at breakneck speed), the dancing quality of Shaham’s playing was such that the faster tempi as a whole never felt excessive or showy. He imbued movements like the Adagio of the C Major Sonata — whose double- and triple-stops sound terribly hard to sustain in the slow recordings of old — with uncommon lightness that yet seemed so natural, I can’t help but wonder why more of us don’t play Bach in this way.

Asked how he thinks performances of Bach will sound 100 years from now, Michalek said he couldn’t imagine audiences’ experiences of the music evolving in any significant way. So much has already been done, so many recordings made — “I feel like a fly buzzing around something grand and magnificent,” he said. But Michalek is too modest. As a pair, he and Shaham have created a Bach experience like no other.