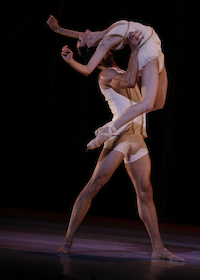 Robert Joffrey was 11 when he first saw Kurt Jooss’ 1932 masterwork, The Green Table, in Seattle. It became talismanic to him, according to Sasha Anawalt in her excellent history of the Joffrey Ballet, and it entered his company’s repertory in 1965, concurrent with the escalating Vietnam War. Sadly, its grim message has never become moot.

“The Green Table capped a beautifully performed program Saturday night at Zellerbach Hall, under the auspices of Cal Performances, as the troupe paid an all-too-brief visit from its Chicago home. (If you haven’t seen The Green Table, look it up on YouTube. You won’t be sorry. There’s also a nifty conversation between Joffrey and Jooss, circa 1965.)

As the ballet opens, The Gentlemen in Black, 10 diplomats in coattails and anonymizing masks, gesticulate rhythmically around a green-baize table to F.A. Cohen’s duo-piano score. Suddenly they whip out pistols, and with one startling shot the war begins. Brave men march to war, leaving behind wives and mothers and snakes like the Profiteer (Temur Suluashvili), a fop in white gloves who drives women into prostitution and steals rings from the bodies of dead soldiers. Which brings us, of course, to Death (Dylan Gutierrez).

The easy trust of partner to partner creates a sense of emotional safety that admits intensity, surprise, and originality. The centerpiece of the ballet, he’s muscular, yet skeletal, stamping percussively and relentlessly as he takes away everyone in his path. His face, too, is an expressionless mask. As stunningly rendered by Gutierrez, he’s a killing machine; once, — suddenly, chillingly — we see him staring out at us while crouching over his prey (yet another dead soldier) like a lion about to devour a wildebeest.

The strength of the ballet, though, lies less in its rendition of these stereotypes than in their gestural power, the choreography’s dynamic flow; the journey, for instance, of the young soldiers from proud stepping to hard slog through the mud of combat and finally to mortal wounds and collapse. Or the ardor of the wives — the gentle, radiant curves of their bodies as they say good-bye to husbands; the torsion of grief as they lose their homes and their dignity. And, beautifully, the surrender of the character called the Old Mother (April Daly) to Death in a woeful and heartrending pas de deux. The ballet ends with a return to that green table and those Gentlemen in Black, unscathed, so the vicious circle can continue. 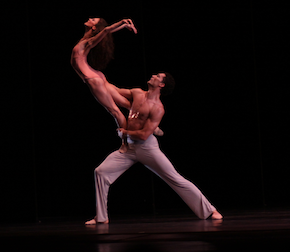 One choice among the three ballets on the bill was problematic. Edward Liang’s The Age of Innocence (2008), supposedly inspired by Jane Austen novels, purports to show sexual tension and repression in the Austen era. Be that as it may, what it actually showed were five interludes with strenuous close partnering in red-draped rooms that reduced the women to scissors and Slinkys in white nighties and underwear. The men manipulating them were wearing peplum shirts atop what looked like panty girdles. Austen, who functioned with singular brilliance in the era allegedly presented here, deserved better, as did the dancers, though they all superbly performed what was set before them. (Talk about repression.) The music was by Thomas Newman, with an occasional swatch of Philip Glass.

Christopher Wheeldon’s After the Rain, set to Arvo Pärt, premiered in 2005 at the New York City Ballet, and its pas de deux, set to the composer’s Spiegel im Spiegel, was included in a San Francisco Ballet gala. But this is the first time another company has been given the rights to perform the entire thing. This may sound like a too-granular bit of information, but not after seeing the ballet, which is a wonder. Lucky Chicago, to be able to see it again. Arriving onstage after the Liang, it was a marvelous corrective.

Part 1, set to the first movement of Tabula Rasa, is for two couples in gray (Victoria Jaiani and Fabrice Calmels; Valerie Robin and Matthew Adamczyk). The women are strong, standing over the men, with arrow-like legs thrusting to the sky, as the ballet begins. They are equal partners in the sequence of virtuosic lifts and balances, and the easy trust of partner to partner creates a sense of emotional safety that admits intensity, surprise, and originality.

Part 2, the pas de deux, is pink-hued, warm, and intimate. Stunningly danced Saturday by April Daly and Rory Hohenstein, it embodies, within a small space, closeness as well as independence. The whole thing goes on with remarkable suppleness. The two of them are exploring their singularity as much as their partnership. Here, as in Part I, the choreography’s requirements embody risk. The tension is exquisite and the ultimate resolution is tender and lovely, as Hohenstein rolls beneath the bridge created by Daly — a comforter of the finest kind.