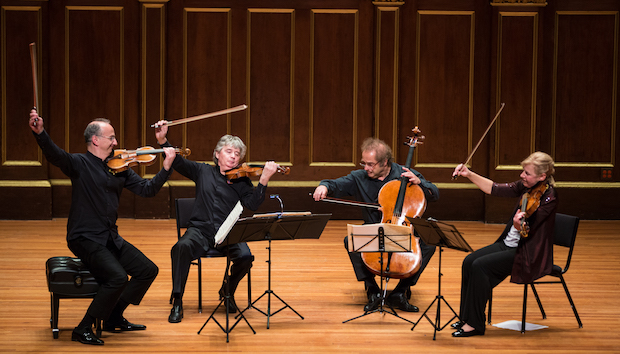 Beethoven’s Quartet in F Minor, Op. 95, though technically a “middle” quartet, occupies strange territory. Nicknamed “Serioso,” it’s undeniably stern — but, abruptly, ends with a coda in the major, diminutive in character and marked molto leggieramente (very lightly). Beethoven’s quartets gradually grow expansive, culminating in the experimental and monumental late works. But Op. 95 is unusually terse; in fact, it’s shorter than the earlier Quartet in G Major, Op. 18 No. 2. Both of these works appeared on the Takács Quartet’s October 15 program at UC Berkeley’s Hertz Hall — the first in their six-concert presentation of the entire Beethoven Quartet cycle.

More than anything, Op. 95 is unsettling. With somewhat ambiguous rhythmic phrasing, it’s difficult to establish its character, which constantly shifts. Many groups, particularly younger ones, play the first movement less seriously than ferociously: fast and brittle. So it was a pleasure to hear the Takács Quartet — Edward Dusinberre and Károly Schranz, violins; Geraldine Walther, viola; and András Fejér, cello — play the Allegro Con Brio in a more moderate tempo that brought out Beethoven’s deliciously strange lines.

Surprises abounded. In the darkly sweet slow movement, cellist Fejér was almost unduly peppy in his initial statement of the descending line. Later in the movement, however, when this material returns as a rapidly modulating sequence, he imbued each of the notes with intense vibrato and thickly slow bows. In the expressive major-key moments in both this movement and the finale, the group was unexpectedly — yet delightfully — expansive.

But the unsettling feeling permeating Op. 95 extended into the rest of the performance — inappropriately so. Some ideas, though potentially appealing, backfired in practice. For example, the Takács’s unusually brisk tempo in the fourth movement of the Quartet in B-flat Major, Op. 130 initially seemed to ideally suit Beethoven’s indication of “Alla danza tedesca” (As a German dance). In this challenging tempo, however, increasingly busy passages only became messy.

First violinist Dusinberre’s light, sul tasto bowing (bowing on the fingerboard) in the beginning of the Presto was interesting, but detrimental to the rhythmic integrity of the group. And the Cavatina’s heartbreaking C-flat major section, marked “Beklemmt” (oppressed or heavy of heart), simply sounded small, its offbeats poked rather than felt.

Dusinberre’s new book, Beethoven for a Later Age, which gives tantalizing glimpses into the group’s rehearsal process, describes how, in the fugal entrances of Op. 131, each member of the group plays with a slightly different character. It’s a vital combination of cooperation and individual expression, he says. Again, it’s a sound idea in theory — but on Saturday night, individual rhythmic play in the first movement of Op. 130, among other places, had ill effects on the ensemble as a whole. And in Hertz Hall, it was often difficult to hear second violinist Schranz, leaving the quartet’s sound, essentially, one person short.

Then there were beautiful moments. In the meandering yet intensely motivic Andante of Op. 130, Takács excelled. Busy accompanying lines — trills and chains of grace notes — never overpowered the sweet melodies passed from each player to the next.

The evening’s highlight was Op. 18 No. 2’s Adagio cantabile. Dusinberre’s playing here was sweet and fluid, and Fejér and especially, Walther, formed a warm core. The miniature scherzo Beethoven ingeniously inserts was beautifully light and controlled, yet spontaneous in feel.

From a group that has enjoyed a successful and multifaceted 40-year career (Takács reached its current formation in 2005, with the appointment of Geraldine Walther, former principal violist of the San Francisco Symphony), this somewhat uneven performance could have been a fluke. Only the rest of the cycle, which continues in March and April, will tell. 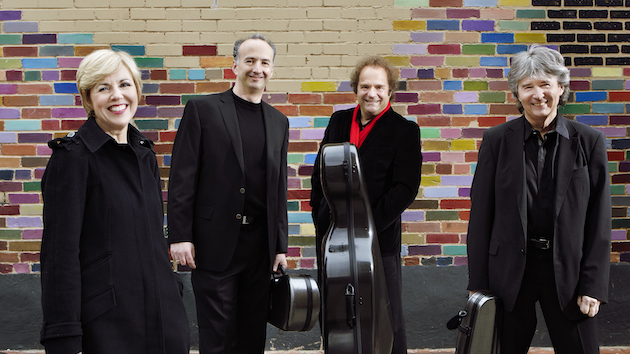