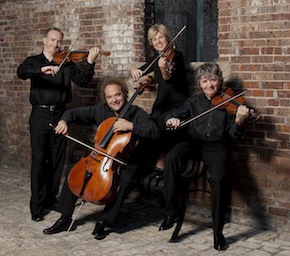 The Takács Quartet, which has become something of a fixture in the Cal Performances concert calendar, has gradually emerged as one of the premier chamber music ensembles of its generation. I have had the privilege of reviewing several of its concerts in Hertz Hall over the past decade, and while I have sometimes quibbled with details of its approach to the mainstream “classical” repertoire, I have always been impressed with its members’ energy, distinctive sound, and thoughtful (if idiosyncratic) approach to interpretation.

Of course, most of the mainstream repertoire is chamber music that was originally intended for performance in the intimate setting of a private residence, so the process of translating that experience to the concert stage inevitably involves making compromises that invite quibbling criticism. A modern string quartet is likely to feel more at home in a program made up of works by Janáček, Britten, and Debussy that were written with the concert stage in mind, so I was expecting a fine performance — yet the caliber of music making in the Takács concert on Sunday was simply stunning.

Although the first half of the program consisted of two quartets written shortly before their composers’ deaths, the affect was fairly serious, but not truly elegiac. Leos Janáček’s second String Quartet, subtitled “Intimate Letters,” was conceived as a kind of love letter to a young woman with whom the composer had maintained an apparently platonic affair for the last decade of his life. Janáček worked in a firmly centered, neoromantic tonal language, though much of his motivic material derives from the speech rhythms and pitches of the Czech language, and his textures frequently sound quite modern, with glassy ponticello (playing on a string instrument’s bridge) effects reminiscent of Bartók.

Teasing Out the Richly Romantic

While the Takács Quartet is well-known for its performances of Bartók, its approach to the Janáček emphasized the Quartet’s more Romantic qualities. Violist Geraldine Walther has found a way to integrate her warm, round sound into the Quartet’s distinctive tonal palette, and I was especially taken with the way her sound played against the earthier tones of second violinist Karoly Schranz, creating a rich texture with clearly distinct inner voices.

The highlight of the program was Benjamin Britten’s seldom performed third string quartet, written in 1975–1976 and given its premiere performance just weeks after the composer’s death in December 1976. Britten is often regarded as one of the more conservative 20th-century composers, yet he was keenly aware of the innovations of his more adventurous modernist contemporaries, whose influence is particularly evident in his later instrumental music. The third quartet shows flashes of Stravinsky, Schoenberg, and Bartók, but also reflects the postwar concern with instrumental tableaus of more static colors and textures.

The caliber of music making in the Takács concert on Sunday was simply stunning.

Bartók’s influence is evident in the five-movement arch form, centered on a wonderful third movement “Solo” featuring first violinist Edward Dusinberre’s mesmerizing cantilena over an ever-shifting texture of polyphonic countermelodies in the lower strings. Some of the more affective moments in this quartet come from an almost Ivesian simultaneous juxtaposition of distinct planes of musical experience. “Duets,” the opening movement, presents every possible pairing of instruments, and once again the alloy produced by Shranz and Walther was particularly intriguing.

The Debussy Quartet, which concluded the program, was given a typically boisterous Takács treatment, with tempos that occasionally threatened to result in ensemble mishaps, particularly in the fast pizzicato passages. I would have preferred a more transparent French approach to vibrato and timbre, but that can be difficult to pull off in a concert hall. Reliably, the Takács performance was thoughtful, imaginative, and thoroughly enjoyable.