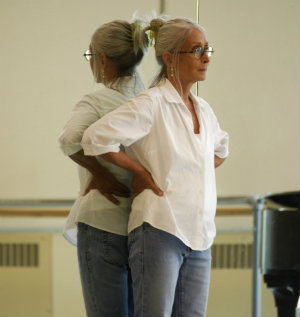 Twyla Tharp, as devoted to Bach as to jazz as to dance, brought it all to UC Berkeley’s Zellerbach Hall Oct. 16-18 as Cal Performances presented the choreographer’s 50th anniversary tour. The show and the company of 13 on Oct. 17 were as virtuosic as she is. It was also as devoid of nostalgia over her own career as she is.

That doesn’t mean Tharp ever turns her back on what she’s learned. She uses everything toward what she’s trying now. Even her not-so-hot dances become grist; her enormous successes, more visible in her new imaginings, often provoke a tingle of recognition: the backward shuffle-trot from In the Upper Room, for instance, or the torqueing leaps of Push Comes to Shove.

And then there are her music choices. Two are go-ahead new, like the “First Fanfare” and then the “Second Fanfare,” set to brassy John Zorn. The two major dances, both Bay Area premieres, go back to her go-to composers, Johann Sebastian Bach (Preludes and Fugues) and the American jazz greats Jelly Roll Morton and Fats Waller of Yowzie, chosen by Henry Butler and Steven Bernstein and played by the Hot Nine.

Tharp, 74, has amassed a roster of great dancers over time, and she turns to them project by project. They reflect her own eclectic training and interests; though all except Rika Okamoto, who began with Martha Graham, have spent a lot of time in ballet. Several are north of 40. Some have worked with Tharp on Broadway (Movin’ Out, Come Fly With Me). John Selya, who joined her in 1988 when she had a mini-troupe within American Ballet Theatre, has moved from being the youngest to being the company’s grand old character. He also happens to move spectacularly. Savannah Lowery and Kaitlyn Gilliland are in the New York City Ballet; Matthew Dibble is from the Royal Ballet.

They’re experienced, versatile, strong, graceful — in short, marvelous. And they’ve got to be devoted; they’re spending about a month touring the country on planes and buses. It does their bodies no favors. But oh, their spirits. Ebullience was palpable from “First Fanfare,” the brisk, bright opener, rich in fan kicks, splits, and blithe lifts.

Ebullience is palpable from “First Fanfare,” the brisk, bright opener, rich in fan kicks, splits, and blithe lifts. The dancers wear contemporary jewel-toned costumes by Santo Loquasto, a longtime collaborator who’s dressed and designed the whole show, and all the lighting is by James F. Ingalls. Zorn’s composition, Antiphonal Fanfare for the Great Hall, is played by the Practical Trumpet Society.

Preludes and Fugues begins at “Book One of The Well-Tempered Clavier,” as couples in black turn sexily, joined at the hip, then frolic into grand jetés and big, childish jumps, legs flexing at the knee. There are lots of these. It was a jumpfest, but it’s still Bach. Tharp, like Paul Taylor, whose company she danced in early on, animates baroque music better than anyone except maybe Balanchine, making the extravagant things dancers can do look timeless – the deep arabesques, the sustained turns and unified, high-flying lifts.

Zorn’s second fanfare, “In Excelsis,” played by the American Brass Quintet, zips right into Yowzie, the climactic, most pyrotechnic part of the show. Loquasto, by the way, has outdone even Loquasto, with soft, playful, richly graphic costumes, matched by the backdrop. It’s hard to decide which would be more desirable: to be able to move like the dancers, or just to be able to wear those costumes anywhere. 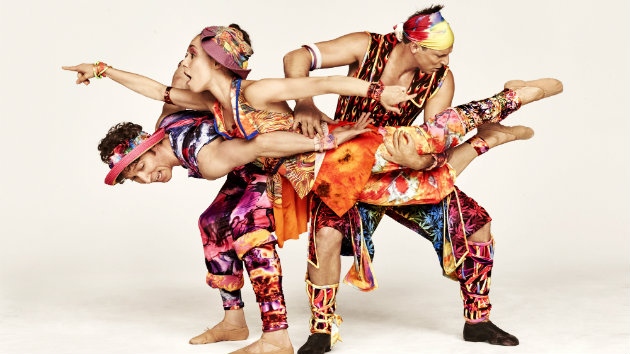 Yowzie’s charm, sass, and ease feels similar to one of Tharp’s earliest pieces, the immortal 1973 Deuce Coupe, which premiered at the Joffrey Ballet and is set to the Beach Boys. In Yowzie, the breakaway impulse comes from classic New Orleans jazz, as it did in Tharp’s terrific Eight Jelly Rolls (1971) whose music included Jelly Roll Morton and Fats Waller too.

Yowzie lives up to its name. It opens with silhouettes of two antic figures, Selya and Okamoto, looking even more antic with their high-flying hair. The music is augmented with whoopee-cushion sounds, and the dancers indulge in Tharp’s goofiness – rubbery moves, mugging looks, acrobatics — without losing even an iota of their performing edge. We see impeccable and improbable leaps and spins and dives, yes, dives, and hops, jumps, lovely arms, direct rapport with the audience, the speediest runs and falls and recoveries. It goes by almost too fast, but the franticness is nicely measured.

Each dancer gets time in the spotlight, and from the wings, we can overhear the other dancers  cheering them on. Tharp didn’t take a bow Saturday night, but it’s entirely possible that the loudest voice was hers.