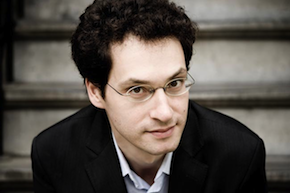 For some time, the Israeli-born pianist Shai Wosner has been on a journey of exploring works by Franz Schubert. He recently recorded an album containing two of his sonatas, and he has lately been performing mostly-Schubert concerts. His audience at Hertz Hall in Berkeley on Sunday had a glimpse of his journey through two Schubert sonatas and a set of pieces conceived as the third set of impromptus, as well as a Schubert-infused contemporary work.

Schubert often presents a unique challenge for pianists, because his dynamic markings most often range from piano to pianissimo. His compositions demand a sense of intimacy that can only be communicated through “whispering” at the keyboard, but not without intense passion. In addition, silence plays an important role, breathing tension rather than a rest.

Wosner, who has been seen in a Cal Performances interview on YouTube, opened his performance with a driven performance of Drei Klavierstücke, D. 946, composed a mere six months before the composer’s early death at 31. The relentless triplets in the first work were punctuated with an exquisitely timed silence that heightened tension. Yet the sense of intimacy that Wosner created in the 678-seat Hertz Hall was such that I wanted to get closer to the piano, particularly in the lyrical No. 2. Generous application of the sustain pedal helped create a round sonic environment with depth.

By contrast, Jörg Widmann’s Idyll and Abyss (Six Schubert Reminiscences, 2009) presented a kaleidoscopic, dreamy soundscape containing fragments of Schubert’s music. Closing my eyes, I could almost imagine standing in an postapocalyptic world, amid a devastated landscape. Shards of Schubert added a haunting atmosphere that reminded me of compositions by Ernst Krenek, a Viennese composer born in 1900. The overall effect was most convincing.

Wosner’s sense of warm intimacy continued throughout the two sonatas he presented: Sonata in A Major, and Sonata in B-flat Major, D. 960. Here, Schubert’s glorious lyricism came alive. Phrases arrived in long breaths but were not pushed, and a thread was spun throughout that held the rather substantial works together.

The defining moment of the recital came in the middle section of the second movement of the Sonata in B-flat Major. There, warm colors blossomed, and the indulgent tempo seemed even to halt the tall campus clock outside the hall. The voice was lowered at times to barely audible whispers, but it retained an authority that demanded focus and total attention. The melodic lines contrasted with the deeply verdant Earth and soared above the clouds, bathing in the warm sun. However, when the warmth was interrupted by silence, and then when the music returned to the steely C-sharp-minor theme, it was as if a part of me died inside.

Throughout the recital, however, I could not help but think that the range of colors was too constrained, since the heavy application of the una corda pedal robbed the music of possibilities for more colors and depth. There were times where melodic lines had no distinct colors and were buried among the accompaniment. The experience may have been different if I had been sitting by the piano, however. Indeed, Schubert may best be performed in an intimate setting.