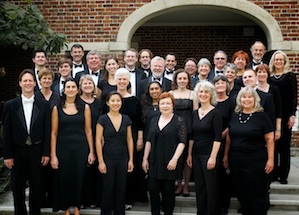 The California Bach Society has steadily expanded its repertoire to include Renaissance and Baroque music in general. Its concert Friday night, at St. Mark’s Lutheran Church in San Francisco, consisted of music composed before Bach’s birth. Director Paul Flight is on a brief sabbatical, and guest conductor Amy Stuart Hunn put together a program of Renaissance madrigals, titled “Draw On, Sweet Night.” The program was imaginatively arranged and beautifully sung. I had wondered whether I would derive as much pleasure from hearing familiar madrigals sung by a chorus in a concert hall as I had often felt when singing them one-on-a-part in living rooms. The answer was yes.

Beginning with German pieces — perhaps a nod to Bach’s native place — the choral sound was warm and lovely. The singers stood in a semicircle, women on one side and men on the other, so that double choir exchanges could be easily sung without moving the singers around between pieces. This arrangement worked very well in the first piece, Heinrich Isaac’s Innsbruck, ich muss dich lassen (Innsbruck, I must leave you). The second verse featured the men, and the striking individual sounds of several voices could be heard, from high tenor through baritone and down to bass. Yet in the other verses there was a fine choral blend of voice quality. These singers are very well trained.

After pieces by Ludwig Senfl and Hans Leo Hassler were sung, the program moved to England. The title madrigal, Draw On, Sweet Night, by John Wilbye, is a gorgeous piece for six voices, and the choral singing was magnificent — the sound beguiling, the words meaningful, harmonies in tune, and imitative motifs passed from section to section.

The English songs ended with three songs by John Dowland — Dear, if You Change; Come, Heavy Sleep; and Come Away, Come, Sweet Love — which are choral versions of solo lute songs. Jonathan Salzedo played the lute parts on harpsichord. The Elizabethan poetry is wonderful and complex. This was one set of pieces that could be more fun for the singers than for an audience that hears the poem only once. They require very close attention to grammar and punctuation. The commas matter. A lot.

A French group started with another solo song arranged for chorus, the lively Tant que vivrai en Âge florissant (As long as I am in my prime), by Claudin de Sermisy. Two excellent songs in this group were Mille Regrets (A thousand regrets at parting) by Josquin Desprez, and Bonjour, mon Coeur (Good day, my heart) by Philippe de Monte.

The choral sound was warm and lovely.

The singers do well in a variety of languages, but I did notice some American r sounds creeping into the Josquin, where a French singer would make the r more Italian. De Nuit, le bien (By night, the good), by a composer new to me, Anthoine de Bertrand, was a lovely song, expressively sung.

One can tell that Amy Stuart Hunn is a singer by her saving an Italian group for last. No matter what European language we speak, singers want to sound Italian. All those pure, uncomplicated vowels make the voice carry and sound at its best. The first three songs in the Italian group were by Sigismondo d’India. They featured simple, direct texts; sudden, unexpected harmonic changes; free-form recitativelike passages; little dotted licks piling up; and imaginative distribution of voices. The chorus sang them with brio, clearly enjoying them.

The singing in all parts and all languages was engaged and expressive.

The concert came to a fitting end with three masterpieces by Claudio Monteverdi. Ecco mormora l’onde (Lo, the waves murmur) creates a strong visual picture of dawn, colorful in its distribution of voices and very Italian in its runs and imitative entries. Si, ch’io vorrei morire (Yes, I’d like to die) is a deliciously erotic piece, building up to a stunning climax. Rimanti in pace (Remain in peace) is a dialog between Thyrsis and Phyllis, with falling chromatic lines as Thyrsis laments his imminent death. The men were especially good at dynamic contrasts, singing softly and suddenly bursting out; and all wallowed in the long, despairing ending.

Throughout the concert, the bass voices created a strong foundation for the madrigals. The singing in all parts and all languages was engaged and expressive.