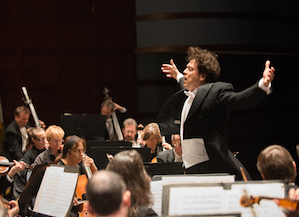 The inaugural season of maestro Donato Cabrera’s tenure at the California Symphony concluded last Sunday with the concert ‘A Russian Spectacular’ at the Lesher Center in Walnut Creek, featuring music by two Russian composers and a new piece by the orchestra’s Young American Composer-in-Residence, D.J. Sparr.

This world premiere, a 10-minute single-movement composition titled Dreams of the Old Believers, more or less fits the concert theme because it is inspired by the story of the Lykov family who had been living for decades in complete isolation in the Siberian taiga, until they were discovered by accident in 1978.

Old Believers is the name of a group of Christians that separated from the Russian Orthodox Church in the 17th century, out of protest against church reforms introduced by the then-Patriarch Nikon (1605-1681). As Old Believers, the Lykov family fled to the taiga in 1936, during the height of the anti-religious campaign that was going on in the Soviet Union.

For his composition, Sparr found inspiration in one specific detail from the Lykov family’s life in isolation: For entertainment, they would recount their dreams to each other.

How much of all this has ended up in the actual musical composition is anyone’s guess (and perhaps not even that relevant), but the story inspired a piece that is a blast. Dreams of the Old Believers opens with nebulous strings, bell-like brassy accents and a muted trumpet, until the oboe emerges with a compelling melody that is echoed by the flute moments later.

In the program notes, Sparr writes that he incorporated elements from Russian orchestral literature as a backdrop for his own musical reflections. Parts of the composition indeed reminded me of Stravinsky’s erupting Russian spring in Le Sacre du Printemps, with hints of Borodin and Scriabin, but there was also a suggestion of Steve Reich.

Sparr is especially creative with his choice and use of percussion; for instance, he uses a Tibetan Singing Bowl, two tuned crystal glasses, and wooden clappers in the instrumentation. Two offstage ensembles (flute/violin/viola and oboe/violin/cello) serve as voices for the Lykov’s recounted dreams, using melodies that consist of a limited number of notes within a narrow range of the scale, but are mesmerizing in their simplicity and repetition.

Although the spatial effect of the (left and right) offstage ensembles was pretty much lost from where I was sitting, Dreams of the Old Believers is a well-crafted, very accessible, rich and colorful piece of music with a lot of atmosphere.

Yakushev's pianism was energetic, witty and playful and profound. Heavily encouraged by Maestro Cabrera, he rewarded the audience with a dreamy encore piece by Chopin.

A more thorough ‘Russian Spectacular’ sentiment came to the Lesher Center’s stage in the form of pianist Ilya Yakushev and the Rhapsody on a Theme of Paganini, Op. 43, by Sergei Rachmaninov.

Extremely relaxed, almost nonchalant (but not in bad way), Yakushev moved through the 24 variations of the Rhapsody with some good-natured showmanship and enviable ease, leaving himself enough time to make eye contact with audience and orchestra every now and then. His pianism was energetic, witty and playful and the contrasts he created between the lighter and gloomier variations were profound. Heavily encouraged by Maestro Cabrera, he rewarded the audience with a dreamy encore piece by Chopin.

With excellent solo work from oboe, bassoon, clarinet, flute, piccolo, and especially first violin (played by concertmaster Leor Maltinski), the California Symphony concluded the afternoon concert with Rimsky-Korsakov’s ever-gorgeous symphonic suite Scheherazade. Maestro Cabrera couldn’t prevent a certain loss of flow, and the rhythmic precision and overall detail faded slightly as the piece progressed, but the orchestra left an afterglow that was vibrant and solid.