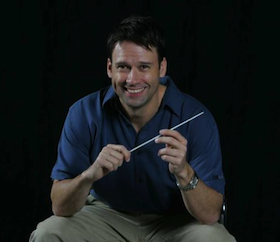 The California Symphony, having briskly disposed of its previous music director, Barry Jekowsky, two years ago, is now on the hunt for his successor. Like other orchestras in search of a new leader, it’s making a publicity virtue out of necessity, inviting seven candidates to give guest performances this season in a great conductor search, with the audience participating by filling out online surveys after each entry. SFCV will be keeping a close watch as this drama unfolds over the concert year.

First up, on Sunday afternoon in the Hofmann Theatre of the Lesher Center for the Arts in Walnut Creek, was Robert Moody, currently music director of both the Winston-Salem Symphony (North Carolina) and the Portland Symphony (Maine). He had already given a creditable account of himself with the California Symphony as a guest last season.

Moody sports an endearingly boyish tuft of hair sprouting over his forehead, and a big bright blue bow tie on his collar. More than most conductors, he conducts with his legs: His crouches and other postural positions communicate his ideas to the musicians. His precise circling and rising hand gestures are also unusual. The repertoire he led is admirably suited to demonstrating, or exposing, a conductor’s sense of shaping the music, making it flow with a sense of purpose.

The concert opened with the Danzón No. 2 by Arturo Márquez. This bon-bon of Mexican dance hall tunes, similar in spirit to Copland’s El Salón México except that it’s by an actual Mexican, has become that country’s standard concert offering of national color since Gustavo Dudamel, music director of the Los Angeles Philharmonic, took it up as his signature showpiece. Anyone who’s heard Dudamel’s Venezuelan student orchestra play it would recognize the California Symphony’s performance as extremely Anglo in style: Mexican language in a flat U.S. accent. Much of it was good, nonetheless, and got the swing of the thing across — what do you know, white folks can dance — and only a few passages were particularly stiff or unconvincing.

At Hofmann, the stage crew must remove the entire first violin section’s chairs to make room to drag a piano to the front of the stage. This was to allow Gregory Taboloff to play Rachmaninov’s Piano Concerto No. 2, which he performed with printed music, the pages of which he turned himself. From where I sat, in back underneath the overhang, the piano sounded dampened. This reinforced the impression of a leisurely, somewhat rambling performance, an approach that worked best in the Adagio movement. The music here was pleasingly gentle and content with itself — especially in the orchestra, as, even in soft arpeggios, Taboloff is a percussive pianist. The finale picked up the energy slightly, catching the soloist off when he had some difficulty with fluidity in several of the high and glittery passages of solo work. His other runs were fine, though, as Moody firmly moved the orchestra through a little wobbling to the conclusion.

The repertoire Moody led is admirably suited to demonstrating, or exposing, a conductor’s sense of shaping the music.

Some audience members left at intermission, leaving a few holes in the previously nearly full house. Too bad for them, as they missed the best part of the concert. Moody spoke briefly to introduce Sibelius’ Symphony No. 2 as another work of strong national color, depicting Finland’s “fjords and tundra.” Alas, Finland has no fjords, and not much tundra either. Regardless of the exact geography, it’s obvious what Moody meant, and this showed in the performance. He left the color to be provided by Sibelius, and he himself worked on presenting it plainly. In other words, like the Márquez, this was another Anglo-accented performance.

Moody had, nevertheless, a clear vision in mind, revealed in his tempos. Throughout the first three movements, whenever the music got louder, he had the orchestra play faster. This practice changed abruptly with the finale. Starting with a sudden ritard in the transition passage from the third movement, throughout the finale he kept getting broader and slower in a desperate attempt to combat the music’s inherent loquaciousness by a dose of Grandeur with a capital G. This struggle was, surprisingly, ultimately successful, and the symphony ended with a satisfactory bang.

The performance gave me a good opportunity to study the orchestra. The California Symphony winds and brass are solid and workmanlike. The brass has more to do in this symphony than may seem at first apparent, and these players and the winds particularly shone in the slow movement. The strings, though, are peculiar. They have a heavy sound, with a strange style of off-placed attacks and some difficulty keeping fast running passages together. This last quality was transformed into an amazing angry buzzing at the climax of the slow movement.

The concert ended with a most unusual ovation. Although the entire audience rose to their feet, their applause quickly died out. The players, however, were still applauding madly in orchestra fashion, by shuffling feet and tapping bows against stands. They knew what a hard-fought victory their conductor had won over Sibelius’ Second. Their enthusiasm gradually shamed the audience into beginning to clap again, and won Moody one more well-deserved curtain call. It had been a pleasure to see him framing and shaping the music, legs and all.