From the hauntingly tentative first notes, or rather the first words of a poem prefacing the Brahms Requiem sung Saturday by the powerful but always beautifully balanced and expressive Cantare Chorale led by Artistic Director David Morales, I knew I was about to have a unique experience. I was to have a window not only into Johannes Brahms’ spiritual world, but also into the worlds of seven young men and women from diverse cultures and backgrounds, who, as members of the Martin Luther King Freedom Center, had written poetry to accompany the texts of the Requiem. Interspersed between each of the movements, these youthful reflections on death, loss, and faith added an intriguing (if at times unsettling) counterpoint to Brahms’ masterful work. While I wasn’t always convinced that the poems helped the music, they complemented it, forcing me to hear and understand the message of the “German Requiem” in a new way. 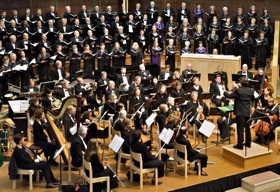 The opening chorus, “Blessed Are They Who Mourn,” sets the tone for the work as one that directly addresses the sorrows of those present as they ponder the issues of mortality. By omitting the traditional Latin texts (which even Bach, a Lutheran, used in his B-minor Mass), Brahms chose texts that were clearly intended to comfort the bereaved and not to judge the departed. This set him apart from tradition: His music always favors lyricism over dramatic impact, and it’s impossible to imagine him writing a show-stopping Dies Irae such as those of Verdi and Berlioz. But what we lose in fire and brimstone in Brahms we gain in compassion and consolation. This is the key that ultimately unites spirits of the living with those of the beloved departed, in this most personal of Requiems.

On either side of this simple, yet deeply touching, music were the words of Genay Markam and Keyaira Williams, which were uttered in contrast with the music’s own daring and radical tone. Birth, represented as “one on the way,” is repeated like a musical phrase placed alongside a father who is lost to the one yet unborn. The poetry altered, without disrupting, the progression toward healing and consolation that I had felt in the music. I confess to being torn between entering the “known” elegiac mood of Brahms and the unknown worlds of these gifted young people. I eventually decided I could do both.

The chorus “All Flesh Is as the Grass” certainly did not suffer from the poetic musing that preceded it. But how to join the reassuring passage “joy everlasting on their heads shall be” with the core question of the baritone solo in the next movement, “Lord, make me to know the measure of my days here on earth,” which was severely yet beautifully sung by Jere Torkelsen? Shroq Aledlah spoke about the plight of contemporary young Muslim women introducing the theme of religious misunderstanding that Brahms surely wished to avoid. I thought, “Yes, this is now addressing the real problems of religious faith in the world today.” The concluding line of the poem — “Faith prepares us to live between surrender and hope” — was precisely what I needed to hear, and Aledlah’s succinct phrase has permanently lodged in my mind. During the balance of the performance I began to consider the origins of the biblical texts and ponder current events in the Middle East from a new perspective, far from Brahms’ Hamburg and Vienna, and indeed far from the Europe of my ancestors.

Cooling, Music-Blessed Oases We listeners were now closer to music drama than oratorio, and some of us may have been wondering what Brahms (thumbs down?) Wagner (thumbs up?) would have thought of all this. And I wondered what image could precede Brahms’ most enchantingly delicate chorus, “How Lovely Is Thy Dwelling Place,” which was to come next. The lilting performance of it, together with the poem that preceded it, by Jabari LaChaux, with its images of “give and take” and “twins’ delicate wrists,” provided the well-matched images and music-welcome oases of beauty that might help us through our difficulties.

Before “Ye Who Are Sorrowful,” we were reminded of the theme of transience (“a life cut short”) and then exhorted by poet Elena Pecot-Zuniga to “transform grief to a happiness.” That Brahms actually achieves this musically is one of his miracles. Indeed, it was the Cantare Chorale that gave us the comfort we need to continue (“as to one whom his own mother comforts”), so movingly sung in whispered tones.

I admired the way the chorus was contrasted with the soprano solo “For a Little Time Labor and Sorrow Were Mine,” powerfully sung by soprano Candace Johnson. As an introduction to the most dramatic section, and the one that comes closest to the traditional Dies Irae (“for the trumpet shall sound”), lines by Beatriz Cuevas laconically describe the shooting death of a 14-year-old boy as one who “caught the bullet.” This was contrasted with the climactic setting of the words “Death, Where Is Thy Sting?,” which musically raised the roof of the Walnut Creek Presbyterian Church and confirmed that the Cantare Chorale can raise virtually any roof when required.

The most avant-garde poetry was saved for last. Eric Fuller introduced a benediction, “Blessed Are the Dead,” with a warning of “guided missiles and misguided men.” His delivery, in which isolation of each word and syllable nevertheless formed a cohesive whole, was almost Webernian in its stark simplicity and intensity. Brahms’ music — fluid and serene, and yet sounding more modern than ever — had the last word. It spoke the truth.