Deadlines — where would we be without them? House payments, concert reviews, coronation masses. In at least one case, we can be glad that Beethoven did not come through on time. His Missa Solemnis, intended for the installation of the Archduke of Olmutz, formerly the Archduke Rudolf, who happened to be a friend and pupil (and patron) of Beethoven, was completed a mere four years late. Lucky for us! One manuscript copy of the Mass, dedicated to Rudolf, bears the inscription “From the heart — may it also again —go to the heart.” The personal message of the work was obviously more important to the composer than 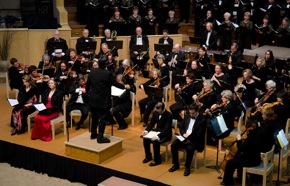 The Cantare Chorale, under the leadership of David Morales, clearly took this inscription to heart in its performance on Saturday at the Walnut Creek Presbyterian Church.

Missa Solemnis is so challenging vocally that Morales found it necessary to rehearse his chorus in a way that saved their voices, only singing full out after all the rudimentary rhythms and notes had been thoroughly mastered. This method worked, so that what had been called “miscalculations” of what mere mortals can sing were, in fact, the necessary means to reach expressive regions never attempted before. That a community chorus of so-called untrained voices could reach these higher spheres disproves the claim that Beethoven did not care about the singers.

Fortunately, the quartet of first-rate soloists that sang with Cantare was up for the legendary demands of their parts. With the commanding opening Kyrie by tenor Thomas Glenn and the ensuing dialogue between the soloists and choir, it promised to be a performance to remember.

Beethoven’s preparation for composing the Mass involved careful study of the Latin text. In the opening Kyrie the word Eleison (one of several of the Latin phrases translated as “have mercy”) is repeated at least 50 times: three syllables x 50 = 150 notes. Simple enough. But after the first few statements, it is expanded so that the basses have to sing that word melodically over four bars (six notes to the bar) without doubling in the orchestra and against a tenor line that goes its own way, each voice reaching its climax on the word Christe at different points. Eventually, the alto soloist, Megan Berti, who showed herself be a little closer to the angels all evening, extended the plea for mercy to over 25 notes, interacting with as many as seven other voices as it literally begs for mercy. The phrase seems to falter, and then takes on new courage, finally reaching a cadence. This is but one page of a score of several hundred pages, all of which present subtle problems if the music is to “go to the heart.” 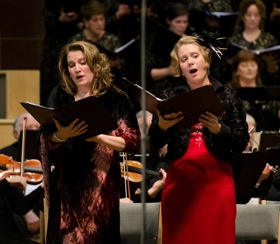 Morales approached the score with utmost care, tending to its myriad details. Beethoven’s score demanded over a thousand editorial decisions on Morales’ part, presumably with regard to the phrasings that composers of that day assumed that performers would have been musically savvy enough to make. In addition, the control of dynamics alone, which go from ff to ppp, with every shading of intensity between, was astonishing and key to this performance’s effectiveness.

The heaven-storming Gloria was electrifying in its contrasts between the expansiveness of the fortissimo ascending theme (portraying divine glory) and the desire for peace on earth. This involves a sudden shift to a “grounded” repeated-note figure that’s sung softly. This was achieved convincingly, as was the hushed intonation of adoramus te, which must be even softer. And so the rapid alternation of dynamic contrasts finally give way to feelings of gratitude portrayed in a simple yet expressive phrase by the tenor soloist. Glenn, whose phrasing and intonation could hardly be faulted throughout, set the stage for one of the loveliest “Gratias” in memory. As it spread from one voice to all the others, a healing warmth filled the hall.

This helped prepare us for the tribulations that were to follow in the cries initiated by soprano Kristin Clayton’s “Miserere nobis” (also translated as “have mercy,” though here it is more like “feel our misery), establishing that the human pain that Beethoven knew all too well was to be given a prominent place in his great work. This was to reach its climax in the central, “Crucifixus” section of the Credo movement.

Beethoven’s identification with all who bear suffering was expressed in the way he sets the word Passus over the shuddering, syncopated heartbeats in the orchestra, as we felt the life ebb from Jesus on the 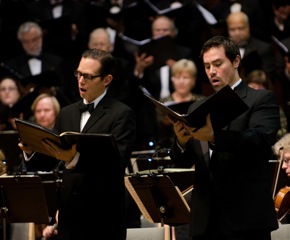 cross. This was a truly shattering experience, especially in light of the feelings just below the surface in those of us in the audience as we contemplated current tragedies in Japan, the Middle East, and North Africa.

But again, healing came in the form of Philip Santos’ inspired violin solo in the Benedictus. It was like a golden thread that symbolized the journey of each individual life, striving to ascend to the heights, rising and falling through each of the violins registers, from top to bottom. Santos made every note count, giving shape to a gesture that seemed to be reaching toward the light. Beethoven thus imparted a sense of warmth that prepared us for whatever difficulties lay ahead.

Austin Kness, who substituted for bass soloist Philip Skinner, made a key contribution in the opening of the final movement, the Agnus Dei. It is a subtle, yet powerful depiction of the central dogma of the Christian faith: a death on the cross atoning for sinful humanity. It is written in the unusual key of B minor, which for Beethoven denoted the color black. In this piece, which is closer to an aria than anything else in the entire work, Kness offered a completely unsentimental version that invited the participation of the other soloists, who eventually enact a “mini-opera,” complete with a military scene with threatening drums and trumpets (echoes of Beethoven’s opera Fidelio) and now, under the threat of war, truly fearful cries for mercy, with the words Dona nobis pacem (grant us peace).

The Mass ends on a note that is almost un-Beethovenian in its modesty. How, indeed, could Beethoven could be at once so godlike and so modest? The word pacem is repeated quietly, as if to say, with Emily Dickenson, “and yet it will be done, as sure as flocks go home at night, unto the shepherds’ arm.” This was all accomplished convincingly, and the soothingly quiet intonation of the chorus actually made me believe it.