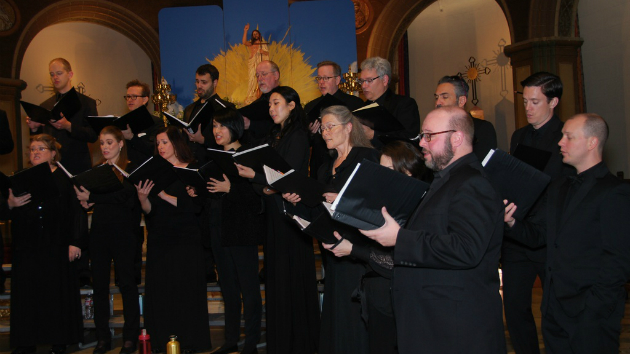 "I feel like I just went straight to heaven and heard the angels singing." That's what I heard someone say after Cappella SF's concert on Saturday night at Mission Dolores Basilica in San Francisco. And I have to agree. The quality and beauty of the sound of this small a cappella group was indeed heavenly. The blend of beautiful voices was rich and full, sounding like a single, multi-faceted, celestial instrument.

Founded and directed by San Francisco Symphony Chorus Director Ragnar Bohlin, Cappella SF is a new group of select singers (ranging anywhere from 24 to 32 members). This was their fourth concert, and the theme was "orchestral," so Bohlin carefully chose music that "was written for many parts, using the medium of voices in an orchestral way." Soloists were featured throughout the program, each one extremely accomplished, revealing the mastery of the ensemble as a whole.

Mission Dolores was an excellent venue for the chorus. The smell of incense and the welcoming glow of flickering candles added to the evening's allure, and the acoustics were wonderfully utilized, as if the room itself was another instrument or voice in the ensemble. The notes often shimmered like bells, ringing and reverberating endlessly — sometimes soft and sometimes loud — and then disappearing up into the stratosphere.

The eclectic program began with Omnes gentes plaudite manibus, (All nations clap your hands) a harmonically pleasing 16-part motet from Giovanni Gabrieli’s 1597 publication, Sacrae Symphoniae. The singers divided into four separate choral groups, sending phrases and rhythms back and forth to each other with grace and precision. For Der Geist Hilft Uns'rer Schwachheit Auf (The Spirit gives aid to our weakness) a Bach motet from 1729, they reconfigured into a double chorus.

The program continued with Drei Geistliche Gesänge, (Three sacred songs, Op. 69) by Joseph Rheinberger, the 16-part Der Abend by Richard Strauss, and Song of Cherubim by Krzysztof Penderecki. Those were followed by O Magnum Mysterium by Elliot Encarnación, a tenor in the ensemble. The song clearly showcased his melodic gifts.

A highlight was the world premiere of Songs of Love and War: Slumber Song, a bold and harmonically complex piece by the group’s composer in residence, David Conte, a professor at the San Francisco Conservatory of Music. The final piece listed on the program, ... a riveder le stelle (1973) was a dramatic 16-part work by one of Sweden's elder statesmen of composition, Ingvar Lidholm.

For the encore, the group went into a semi-circle formation, surrounding the audience on either side of the front pews, and Bohlin moved his music stand halfway back down the aisle between the pews as well, where he conducted a selection from the Rückert Songs by Gustav Mahler.

Bohlin’s plan for the group is to make it one of the premiere a cappella groups in the world. Judging by what was presented that night, I would say that they are well on their way.