Monday, 11:30 a.m. I arrived in Carmel for a two-day visit to the Carmel Bach Festival after a pleasant drive 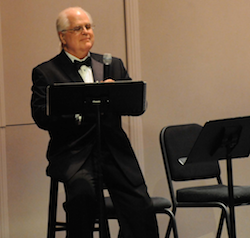 from the South Bay. It was slightly overcast, and cool enough to make a sweater comfortable — a welcome change from the heat at home. I recall street parking here being less tight on weekdays than I found it this morning. Walking around town, I decided, was going to be good exercise. By the next day, I’d gotten the hang of finding good parking spaces; in any case, there’s a large and convenient pay lot adjacent to the Sunset Center, the Festival’s main venue.

Noon. Andrew Arthur was playing a Bach organ recital at the Mission, but I skipped that in favor of a free vocal master class at the dark wood and stucco-paneled Church of the Wayfarer, four blocks from Sunset. Longtime Festival dramaturge David Gordon was overseeing four young professional singers presenting arias by Bach and Handel. All were strong and vivid, the richest and most resonant tones coming from mezzo Emily Marvosh. Gordon was keen-eared and witty in his remarks, telling baritone Jonathan Woody, of the words of his aria, “Be Bach’s attorney and convince people this is a good idea.” In the Handel character arias, he pushed characterization through diction and bodily expression, within the relatively restricted musical expressive range of Baroque opera. In the comparatively abstract Bach religious arias, he specifically concentrated on breath control and pronunciation. Each aria was sung at least twice, counting all the “try that again” admonitions. It made for a pleasant miniconcert from advanced singers who didn’t really need much coaching.

2:30 p.m. Two long blocks down and one short block up made an invigorating quick walk to All Saints Church, a vaulted sanctuary of lighter wood and stained glass, for a concert called “Transcendent Bach.” Although this was a ticketed event, seating was even more packed than at the master class. Baritone Peter Harvey and a small chamber ensemble gave a slow, expansive performance of Bach’s Cantata No. 82 in praise of an easeful death, “Ich habe genung,” with recitatives full of character. A few of the notes in the bass part were a little low for Harvey, yet the Baroque-style wind instruments were temperamental enough to keep the show interesting.

Gordon was keen-eared and witty in his remarks … “Be Bach’s attorney and convince people this is a good idea.”

Harvey also sang arias from two other cantatas, including a glowing benediction from a wedding cantata, No. 197; the instrumentalists presented a trio sonata by Handel. While the concert title suggests that all the selections were chosen for spiritual beauty, the performances tended toward the ethereal rather than the emotional. Even in the slow sections, the sound was brisk and twisty, with angular queries from the violins and with the continuo (double bass, bassoon, harpsichord) puttering along in a light, subterranean way.

3:45 p.m. Surprisingly, at least for an out-of-towner, after the concert it was foggy outside. I drove over the hill to Monterey, where the weather was somewhat brighter, for hotel check-in — it’s much less expensive to stay over there — and to freshen up before returning for the evening.

5:30 p.m. On the walk along San Carlos Street to a tasty and unpretentious dinner, there’s an art gallery selling exclusively limited edition lithographs of the work of Dr. Seuss. Only in Carmel? This was worth a brief detour.

7 p.m. Down in a cavernous meeting room in the lower level of the Sunset Center, David Gordon gave a preconcert talk. He reflected on the performance’s content by discoursing lightly on the history and nature of the terms violin and concerto.

8 p.m. Time for the big concert in the Sunset Center’s main theater. The recorded preconcert announcement included the line, “If you wish to enjoy a tasty cough drop, please unwrap that sucker now.”

Violinist Peter Hanson led this potpourri of Baroque concertos and suites from the concertmaster’s position, introducing each piece, and thanking the donors who provided a new music stand that didn’t drop his microphone on the floor, as happened last year.

This was a bouncy and extroverted, rhythmic concert, with a high treble sound and a strong emphasis on the downbeats.

Bach’s A-minor Violin Concerto was the best-known work of the evening, and the program wended its way down the fame ladder from there, through a three-violin version of Bach’s Keyboard Concerto BWV 1064 and works by Handel, Vivaldi, and Telemann, down to one by Georg Muffat (despite his name, a French composer) in five movements, all of them slow.

That aside, this was a bouncy and extroverted, rhythmic concert, with a high treble sound and a strong emphasis on the downbeats. The crisp rhythm was especially effective on the extended pauses and elaborate note-chopping of Handel’s Concerto Grosso, Op. 6, No. 11. A formal dance would have gone well with this. Hanson’s violin-playing was not ostentatious; it was more that of a dedicated sawyer, even in the slow movement of Vivaldi’s “Alla rustica” concerto, where improvised ornament is called for. As on other occasions at the Festival, imitation-gut strings made pitch often precarious.

Hanson took advantage of Baroque freedom of instrumentation to put a little variation into the works, particularly in the continuo, enlivened by the plucking of a theorbo, a giant-sized lute, particularly notable as it traded plucks with the double bass to simulate Moscow’s church bells in the Russian movement of Telemann’s suite Les Nations.

10 p.m. It was after this concert that I discovered Carmel’s innovation of the “musician hot spot,” a designated place in the lobby to meet performers after the show and offer compliments.

And so endeth the first of two busy days. Continued tomorrow …