Hundreds of thousands, millions, perhaps billions of people around the globe, had just taken the seven-point Live Earth Pledge to do their part to avert global warming. But in Walnut Creek on Saturday night, at the Dean Lesher Center for the Arts, it was business as usual. With not a single recycling bin in sight, the only recycling effort was onstage, where Festival Opera opened its 2007 season with the perpetually popular Carmen.
Performed in French (with English supertitles), the performance offered fine singing, lovely sets, beautiful tunes, attractive protagonists, and credible playing and conducting ... everything but the fire-in-the-belly total commitment that can transform Bizet's staple into gut-wrenching drama. 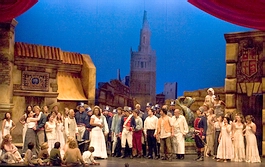 Peter Crompton's designs, though traditional, looked fine. Their primary colors (red on a fanciful banner on high serving as icing on the cake in several scenes, a baby blue sky, the beige-yellow of buildings) gave evidence of a huge amount of effort. Yet the sets seemed more suited to Snow White and the Seven Dwarfs than Meilhac and Halévy's hot-blooded tale of sexual obsession. Perhaps Crompton thinks as little of Carmen as former Met General Director Rudolf Bing, who promptly fled the house once the curtain rose on the streets of Seville.

James Toland's anemic, often statically blocked chorus did little to set the drama in motion. (The 11-person boy's chorus, visually attractive and gratifyingly in tune, sang rings around the grown-up choristers.) Nor did Dean Loumbas' lame attempts at choreography help matters. In all fairness, he had scant room to maneuver his dancers on the crowded Lesher Center stage. According to the program, he lacked true professional dancers, and in his stage movement he had to deal with a Carmen who could do scarcely more than look good, move her hips and feet a bit, and twirl her wrists. Regardless, neither Loumbas nor Stage Director Heather Carolo managed to persuade any of the performers to look like anything other than a group of well-meaning folks playing at Carmen.
Such a Nice Girl
In the title role, current San Francisco Adler Fellow Kendall Gladen displayed winning beauty, ample amounts of charm, and a lovely voice capped by strong, beguilingly multicolored top notes. Unfortunately, her chest voice lacked snarl, and her midrange, where Bizet positions much of his heroine's vehemence, was neither particularly strong nor expressive. Rather than being a brutal animal whose sexual magnetism is strong enough to instantaneously lure clean, upstanding mama's boy Don José into her den of iniquity, Gladen's Carmen was too nice to be believed.

Singing Don José was Ryan MacPherson, a handsome alumnus of the San Francisco Opera's Merola program and a principal at the New York City Opera. MacPherson possesses an exceptionally healthy, fine tenor voice with a natural, unforced top. It was not until Act 3, however, that he began to exhibit enough vocal metal and histrionic passion to match his character's plight. A case in point was the "Flower Song" in Act 2, capped by a lovely, pure B-flat that had Mozart written all over it. To his credit, MacPherson sang passionately as well as beautifully in the closing act, though his final interplay with Carmen seemed a less than credible stab at reality.

From the second he opened his mouth, the unforced strength of Eugene Brancoveanu's ripe baritone declared that the Merola/Adler alumnus was in another league entirely. After all, he was winning awards as Marcello in Baz Luhrmann's production of La Bohème even before he entered the Merola program.

Whatever his talents, Escamillo is not his role. His instrument is so beautiful, and so free of danger, that it could convince a bull to curl up at his feet and snort, "Encore!" And his stage manner — confident, proud, though lacking in menace — was not that of a love rival in heat. Both he and MacPherson (one of them held his knife the wrong way in their duel) looked as though they were going through the motions in acting class. While Brancoveanu is a fabulous singer, Escamillo is a role unsuited to his gifts.
Supporting Roles Well Sung
In smaller roles, Rebecca Garcia's diminutive, minimally acted Micaëla impressed with the innocent loveliness of her voice, which has a beautifully glowing, expressive top. Merola-graduate Matt (or "Matthew") Treviño — the program had it both ways — presented a solidly sung, well-acted Zuniga that for some reason failed to rise above the printed page. 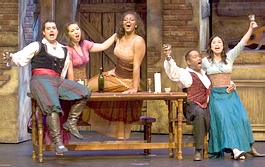 Igor Vieira, whose artistry has shown him worthy of far larger roles, was in fine voice as Le Dancaïre. Singing beautifully, he was not only was he far more animated than many of his fellows, but also overshadowed his cohort Le Remendado, sung by Darron James Flagg. Jessica Deardorff sang and acted big-league as Mercédès, unintentionally upstaging the lovely (if slimmer voiced) Frasquita of Joanne Um. As Moralés, the handsome but somewhat stiff Francisco Aviles exhibited a nice but not particularly strong voice.

Perhaps because my seat on Saturday was close to the pit, where the orchestra's impact is minimized, Bryan Nies' conducting seemed adequate rather than uninspired. Which also sums up Frédéric O. Boulay's production.