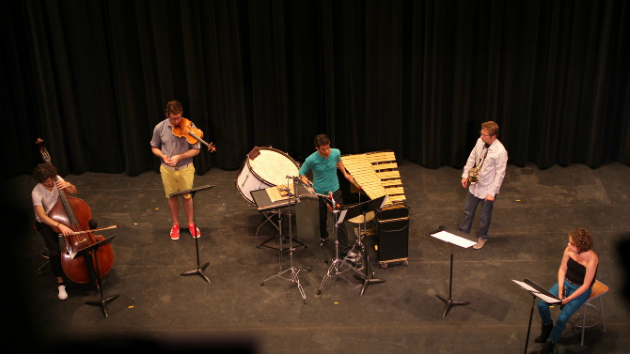 An intricate and frankly puzzling array of gear welcomed the audience from the stage of the Center for New Music on Wednesday night. Emerging from a snake’s nest of coiled cables were two pairs of upside-down bicycle wheels and a skateboard, mounted to a stand like a flipped-over, helpless turtle.

Wheels and other kinds of circular movement formed the unifying thread from this concert by UCSB ensemble-in-residence Now Hear Ensemble, captained by Argentinian composer Federico Llach, who also served as an informal and congenial master of ceremonies for the evening.

Rather than being harnessed directly as noise-makers (no playing cards inserted between the spokes), the cycles and skateboard wheels served as electronic controllers, inconspicuous sensors sending a signal for each complete revolution. Two of the pieces on the program featured the wheels — Spin n’ Play (sic) by the instrument’s inventor, Anders Lind, and Cycles by Wild Rumpus co-founder and co-director Dan VanHassel.

The pair (both premieres) showcased the versatility of the circular controllers: In VanHassel’s piece, the wheels were spun continuously to generate an ebullience of synthesized tones, resulting in a kind of pulsating yet droning texture, eventually “stabilizing” into more regular arpeggiated sequences. Acoustic clarinet and viola blended with the electronics until the noisy, more overtly digital finale.

Lind’s Spin n’ Play focused more on the entropic properties of spinning wheels, which were set in motion and allowed to slow down, producing an organic rallentando (slowing down) motive that tied together the middle portion of the piece and ushered in the thunderous finale (complete with  an appropriately entropic drum solo!).

The evening had opened with Federico Llach’s This Time Around, another premiere harnessing circular concepts by means of protracted, evolving loops, recorded in real time by the composer on double bass and piccolo/flutist Adriane Hill. Each time around, the repeated material felt positively different — possibly due to the length of the loop itself, the additional layer played over it, some electronic manipulation of the recorded audio, or a combination of all of these factors. In parallel to the music, an animation by fellow Argentinian video artist Gaby Goldberg was projected on the screen, providing a visual highlight to the interlocking textures and rhythms.

The remaining two pieces on the program did not fit as neatly within the rotary theme, but were still thoroughly enjoyable. Instrument inventor and composer Todd Lerew’s Variable Speed Machine featured four single-strung instruments, continuously excited by magnetic resonators. The performers were tasked with the incredibly difficult feat of keeping them in unison tuning. As the pitches drifted, a variety of beating patterns emerged, creating the shimmering, hypnotic texture typical of this kind of experimental idiom, but presented here at a comfortable, non-aggressive volume.

VanHassel’s second contribution for the night, Ghost in the Machine, continued to blur the separation between acoustic and electronic sound by having the conventional instruments play noisily, along with noisy samples triggered by the percussionist. By the end of the piece, as the instrumentalists moved to more regular tones, I couldn’t tell with certainty who was playing what, but reveled nevertheless in the imaginative and rewarding soundscape.