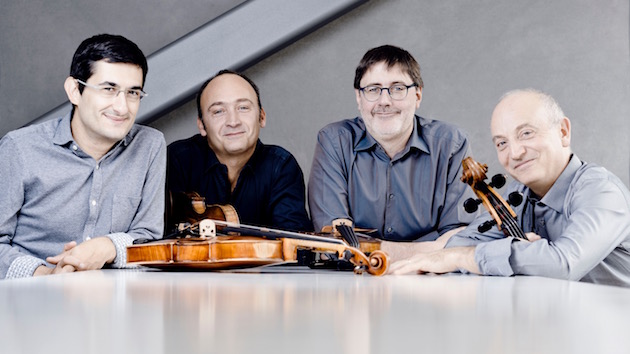 I wanted to buy a CD of Quatuor Danel after the April 24 concert, but there were none left. That’s how positively North American audiences have responded to the short tour by the 25-year-old group, which was virtually unknown here until last year’s debut. Indeed, I can’t overstate the quality of Monday’s program. I’d never heard of the ensemble prior to reading the Chamber Music San Francisco blurb; now, Quatuor Danel — violinists Marc Danel and Gilles Millet, violist Vlad Bogdanas, and cellist Yovan Markovitch — might well be my favorite quartet.

CMSF Director Daniel Levenstein stipulated that the French/Belgian group play Debussy, a programming cliche that worked out for the best: It was a performance finer than the best studio recording a group could doctor. In the first movement, it’s difficult for the chromatic, fast passages to land in unison without a few clunks. But on Monday, neither outer movement had any edges: everything elided, and resurfacing themes were never made obvious by announcement. Cellist Markovitch’s bow speed energized in a large way.

The lighthearted Assez vif is in no sense an emotionally stirring movement, but violist Bogdanas’s solo was so pristine, and the pizzicato so dynamically shaded, that tears came to my eyes. I did no better during the tender slow movement (which, after the searching opening bars, moved with abandon). The calm major chords that drop in on the viola’s contrasting melody were tiny nudges that never spoke too much.

Quatuor Danel has long championed the works of Mieczysław Weinberg, a

Polish-Jewish composer who probably has more spelling variants of his name than he does famous works. In fact, Weinberg’s output was vast, including the cycle of 17 string quartets that Danel first recorded and performed. Yet he’s been criticized as derivative of Shostakovich, who, though 13 years his senior, was a close friend.

It’s true that much of the counterpoint in String Quartet No. 5, which Weinberg wrote in 1945, recalls that of his mentor. The F-sharp major chords in the beginning of the thrilling Scherzo, with impressive passagework played at breakneck speed by first violinist Danel, evoke the frenzied dance from Shostakovich’s Piano Trio No. 2 (written months before). Hints of Bartók, as well, surface in the Improvisation’s climbing trills. But it’s only natural that Weinberg’s music reflects the climate he lived in, and his writing is as multifaceted as it is skillful.

Especially inventive are the limping, polyrhythmic Humoreska and the Serenata, whose lilting lines accompany melodies far sweeter than any Shostakovich. The fervent middle section climaxes in a sea of textures, the first violin’s mad tarantella against a lyrical solo high in the viola, with devastatingly impassive drones. Each aspect is important and was heard: Throughout Monday’s program, the quartet effectively used differing individual sound-profiles (in a given passage, some vibrated while others stayed dry, for example) to delineate lines that, properly managed, communicated shared ideas.

Beethoven’s Op. 130, when it appears, is usually the main event. After these two substantial works, however, it felt like a bonus. Some highlights: novel understatements in the first movement, such as the easy passing over of the G-flat major unison lines, which so often sound mannered, in order to sooner hit the surprising F that ushers in a new harmonic world. On the other hand, presences filled the Andante. With the quickest notes given as much importance as the slower ones, unassuming accompanying figures became integral counter-melodies, like the hardest-working gears in a great machine.

Expressively high leading tones emphasized the achingly sweet dissonances in the Cavatina, yet the final movement, a sunny Rondo, was the saddest: The concert was coming to an end (though not before an encore, the quirky and unsettling Allegretto from Weinberg’s Quartet No. 7, during which second violinist Millet stole the show). I ordered Danel’s complete Weinberg recordings when I got home.