It is hard to imagine a musical repertory of more astonishing refinement than the one cultivated at the 15th-century Burgundian courts of Philip the Good and his successor, Charles the Bold. These courts were home to the most esteemed composers of the century, a roster that included among its many members Guillaume Dufay, Binchois, Hayne van Ghizeghem, Nicolas Grenon, Robert Morton, and Jean Molinet.
While these composers often excelled in sacred musical compositions, it was their French chansons that proliferated more than any other genre in courtly circles throughout Western and Central Europe. This is a testament not only to the preference for French song over other vernacular genres of the time but also to the widespread eminence of Burgundian culture more generally. The high quality of the musical settings by these composers was paired with a long-cultivated tradition of courtly love poetry that knew no contemporary equal. 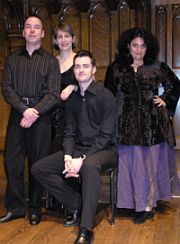 Perhaps this legacy has paled over time in comparison with the more infamous complexities of the preceding ars subtilior or the popularization music attained through print in the 16th century. Recordings of the 15th-century repertory often sound pedantic or even cumbersome, while live performances remain rare. On Sunday, at St. John the Evangelist Episcopal Church in San Francisco, Fortune's Wheel made a persuasive case for a new approach to this music in its San Francisco Early Music Society concert, titled "Amoureux suy: Love and Longing in Burgundy ca. 1450."

Most of these 15th-century chansons were written for three parts, many for four. Rather than allot each part to an individual singer, Fortune's Wheel presented this music most often with the top two lines sung by Lydia Knutson and Aaron Sheehan while filling out the bottom lines with vielle (medieval fiddle) or harp or a combination of these instruments performed by Shira Kammen and Robert Mealy. The approach aligned well with pictorial evidence from the period, which suggests some instrumental accompaniment, but, more important, sounded absolutely convincing in performance.

Kammen and Mealy performed the instrumental parts in accordance with performance practices as we have long understood them to be, with divisions and ornamentations that breathed life into the unadorned lines transmitted in the manuscript sources. The result was a rhythmically propulsive supporting texture for the top vocal parts. The instrumentalists also showcased their skills in two animated vielle duets, one a basse dance titled La Franchoise nouvelle and the other an adaptation of the famous basse dance tune La Spagna. Their lively interactions on stage mirrored the spontaneity of their performance, with supple yet densely interwoven polyphonic lines propelled forward by the rapid unfolding of hemiola and syncopation.
Vocal Highlights Abound
This sensitivity to flexibly shifting rhythmic groupings was matched just as well by Knutson and Sheehan, who rendered some extraordinarily complex vocal writing with astounding dexterity. Given the consistent quality of the pieces chosen for this program, it is difficult to choose highlights. The opening piece, Donnés l'Assault a la Fortresse, paved the way for the evening. The opening command to assault the fortress of the lover's mistress  delivered in equal-stressed, spondaic meter  was an example of Dufay's mastery of rhetorical expression, which was matched in intensity by the breathtaking melismas that concluded each verse.

The lingering vielle lines in Binchois' Margarite, Fleur de Valeur, were as effective as the refrain's ending, twisting to a conclusion that looks back longingly over the year past as Margarite's courtier assesses his feelings for her.

Dufay, Binchois, and their contemporaries preferred the formes fixes inherited from their medieval predecessors in setting their texts. Fortune's Wheel weighted its program heavily toward the rondeau, a favorite of 15th-century composers from among the formes. This orientation toward medieval forms has led some to assess these composers negatively. It was clear from Fortune's Wheel's performance, however, that the structural rigidity of rondeau, ballade, and virelai proved a wellspring of compositional creativity that catapulted Dufay and Binchois beyond any classification as mere followers.

Other highlights included Je ne vis oncques la Pareille, sung alone by Knutson and Sheehan, with its musical enjambments, the beautiful yet somewhat harsh musical sentiments that made Amoureux suy more than a seemingly simple love poem, or the melodic spilling-forth that colors Dufay's Je veuil chanter de Cuer joyeux. That the polyphonic writing tends to be weighted toward the top line was effectively brought out by Knutson's supple coloratura, undergirded by a softer Sheehan. This helped showcase the volatile soprano melismas in Baude Cordier’s Ce Jour de l’An, which abruptly deflate in exhilarating descents, whereupon the sustaining tenor collapses, as well. Sheehan's support in Dufay's Malheureux Cuer helped lift Knutson off the ground in dramatic melodic arches.

The program turned once more to Dufay at the end with Puisque vous estez Campieur. The stately force of the words rendered in rhythmic ordines and angular melismas evinced appropriately the sounds of a warrior and drinker. It was hard to accept that the end of the program had come. The group plans to release a CD of Burgundian chansons later in the year, and I look forward to revisiting these extraordinary works.