“What Do You Think I Fought For?” That was the title of Chanticleer’s concert Saturday at San Francisco’s De Young Museum in Golden Gate Park — a concert powerful and moving in both music and words.

The source of the eponymous concert title was a piece called What Do You Think I Fought For at Omaha Beach? that was set to music by Melissa Dunphy. Projected on a large screen in the museum’s Koret Auditorium was a video of 86-year-old Philip Spooner, speaking to a hearing on Maine’s Marriage Equality Bill. Spooner, a veteran of World War II and a lifetime Republican, was asked whether he believed in equality for gay and lesbian people. His response, skillfully edited for use as a libretto and set as a piece dense in texture, more dissonant than tonal, and more chordal than melodic, was superbly performed by Chanticleer’s 12 male singers, who are soloists as well as ensemble singers, covering the range from soprano to low bass.

Another work performed was Shulamit Ran’sA Chanticleer Mass (2006), which Chanticleer has recorded in a partly abridged form. This concert presented the uncut version, bearing the title Credo/Ano Ma’amin. As the title indicates, it is a setting of Christian and Jewish texts that have much in common. Latin, Hebrew, and English are used; religious faith is the principal subject; and “testaments” are given from the Holocaust and the 9/11 terror. The writing is for singing and for speaking, and Chanticleer starred in all departments — masters of complex harmonies, soloists as bright flashes in the choral fabric, and eloquent speakers as well. 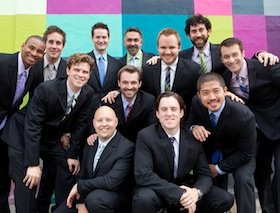 The Garden of Paradise, by Shawn Crouch, was set to poems by Brian Turner, an Iraq war veteran, and Rumi, a 13th-century Persian poet. There is variety in the music — harmonies from simple to complex, unison singing, legato lines contrasting with unsettling war talk, word painting (such as a high soprano cry on the word kill). The tender “Lullaby,” in which a child, frightened by gunfire, is comforted by his father in shifting harmonies over a pedal point, was given a loving performance.

The concert began with the basses, working up through tenor and alto to soprano, offering a motet, Jerusalem, by Ego Hovland. The program notes called attention to Jerusalem as being a holy city for all three major Abrahamic religions. The text comes from the Christian Gospel of Luke, and resonates with prophetic calls for peace from Judaism. The music, partly informed by Gregorian chant, reflects this prophetic tradition.

In this concert, mainly weighted toward many words on important, serious themes, the light-hearted Leather Stocking, by Brent Michael Davids, was a sound track for a short silent film based on James Fenimore Cooper’s Last of the Mohicans. Being a citizen of the Mohican Nation, Davids wants the world to know that Mohicans still live, and he combines native music of his people with classical European style. The audience was treated to a showing of the film accompanied by sound effects from Chanticleer: wordless vocals punctuated by percussion. The piece was conducted by Elena Sharkova, who shares music director credits with Jace Wittig and Kristina Boerger.