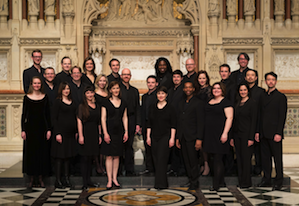 Something special can happen when you listen to early music — works that have survived centuries of conflict, damage, and memory loss to be heard in a modern setting. The magisterial and devout tone renaissance sets also bring certain musical clichés to mind: strict compositional rules, reverberant cathedrals, and a heavy reverence that permeates and subdues the audience into a still and reflective awe. When the heaviness prevails, it can sound stuffy; when done with passion, it can be rapturous.

Such was the task for the Trinity Wall Street choir as they opened their concert on Friday at First Congregational Church in Berkeley, singing a variety of works from the Franco-Flemish renaissance masters. The choir gave an enthralling performance to a packed house as part of the Berkeley Festival and Exhibition, a much-anticipated biennial event showcasing some of the world’s top talent in early music.

The first piece on the program was a Gregorian chant of the Salve Regina, intoned by four sopranos singing from the front of the church. The chant gave way to a Magnificat by Gilles Binchois, with the choir passing sections antiphonally back and forth from the aisles, sonically constructing the space of the church from one side to the other. For the remainder of the evening, the choir formed a simple semicircle around the small portative organ (played by recent addition to the Trinity Wall Street family Avi Stein). The choir was joined by instrumentalists — Rebecca Burrington, Bruce Chrisp, and Audrey Christensen (sackbuts), and Kate van Orden (dulcienne) — who enriched the timbre of the grander works on the program.

The group broke up the major work of the evening, Josquin’s Missa de Beata Virgine, across both halves of the program, interspersing the movements among a variety of motets from the late 15th to the turn of the 16th century. This decision showcased the diversity of textures and rhythms Josquin exploited in the mass, and the flexibility of the choir itself. The jubilant Sanctus found its home toward the end of the second half, and as a result the evening felt as if it had grown organically from its conception in the mass.

One of the joys of the performance was engaging stage presence of Julian Wachner. He draws sound out of the ensemble as if spinning thread at times; at others he dances with the rhythmic variations, his bold gestures amplifying the movement of the sound.

Two pieces, Nicolas Gombert’s Salve Regina “Diversi diversa orant” and Antoine Busnois’ Gaude coelestis domina showcased the power and control of the lower voices in the choir. These two pieces feature the changing styles in renaissance motets. Gombert’s later piece plunges to the lowest possible notes and has a spine-tingling finish, and Busnois’ earlier work expands to the perfectly punchy and deliberate close needed for the open sonorities of high-rennaisance music. In both cases, the lower voices were eloquently rich.

One of the joys of the performance was engaging stage presence of Julian Wachner. Many good conductors give cues and shape musical phrases. Wachner’s gestures manipulate the sound as a solid, tangible object in space. He draws sound out of the ensemble as if spinning thread at times; at others he dances with the rhythmic variations, his bold gestures amplifying the movement of the sound. Wachner also communicates a wonderful understanding of the music at hand to the audience. His clear and concise interpretation of the architectural structure of the isorhythmic motet drew a delightful comparison to classic arcade video games, in which each subsequent iteration of the rhythm becomes faster and faster until the whole thing unravels. Fortunately for us last night, the whole thing didn’t unravel, and the Nuper rosarum flores motet rose to be a highlight of the program.

It is always gratifying when renowned ensembles live up to their reputation. The concert was a triumph and a delight to behold, and while there were certainly many wonderful concerts during the Berkeley Festival, this one surely stands out.