We’re blessed here in the Bay Area with a bounty of good, small companies that get us up close and personal with opera in good, small venues. How much better the blessing is, then, when the operatic material is as powerfully and finely wrought as Tobias Picker’s Emmeline, now enjoying a three-week West Coast premiere run at Petaluma’s intimate Cinnabar Theater. 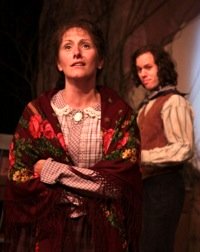 Every seat in the house was close enough to detect the delight on the visiting composer’s face as he chatted with this production’s Emmeline, soprano Carrie Hennessey, during the curtain call that followed the opera’s conclusion on Friday, opening night. Hennessey later revealed the substance of that interchange, Picker acclaiming her with a heartfelt “Brava!” for her “very intense performance,” while the rest of the audience and I expressed our own appreciation in a prolonged standing ovation.

The applause was well-earned throughout the opera’s two acts, from the very first announcements of melancholy by an able chamber orchestra under the guidance of the production’s music director, Nina Shuman. The hardscrabble setting of the opening in mid-19th-century Maine is effectively evoked by scenic and lighting designers David Wright and Wayne Hovey, with simple props and risers and rear projections, 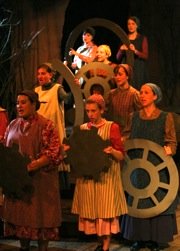 complementing Lisa Eldredge’s homespun costuming. Almost subliminally, I realized that Picker and the company have forged an affecting elegance out of this plainness, which is wonderfully operatic.

What’s more, the momentum of the story, propelled by the composer’s articulate coloring of horns and strings, plus a tangible pulse in much of his scenic writing, ensures that the affinity of a spectator will never be subverted by the serial tragedies onstage. These begin with a child’s burial and proceed to the industrial and sexual exploitation of the young Emmeline, linked later in her life to a doomed romance and isolation. Each one of these story elements also proves an opportunity for remarkable writing for voices in a variety of settings — solo, small ensemble, and choral — with the chamber orchestra (using Samuel Bill’s arrangement of Picker’s full orchestral original) acting as its own furtive but vital cast of characters.

Presentation All of a Piece 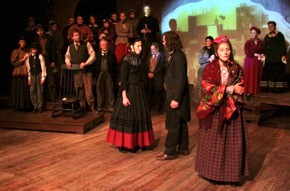 As in other elements of Cinnabar's memorable production, strong singing is matched, across the ensemble, by acting above and beyond the level encountered at most opera companies, big or small, here under the careful and caring stage direction of Elly Lichenstein. The close proximity of performers and audience at Cinnabar helps validate Picker’s particular satisfaction with Hennessey’s evocation of his title creation. Aside from the soprano’s vocal power and clarity, Hennessey manifests a subtle theatrical skill as she mutates (with little time offstage) from a shy, naive daughter to a romantically vulnerable adolescent to a desperately passionate woman in early middle age.

Introducing the theme of severe Protestant morality at the start of Act 1, and enforcing it through the denouement in Act 2, is Aunt Hannah, indelibly portrayed here by mezzo-soprano Cary Rosko. Mr. Maguire, Emmeline’s supervisor in the Massachusetts mill to which she’s sent to earn money for her family, is suavely sung by baritone Robert Stafford, who is credible as a charming and seemingly protective seducer of young girls. Tenor Will Hart Meyer plays Matthew Gurney, the young man who wins Emmeline’s heart 20 years later, long after she returns to her bleak Maine homestead. Meyer is affectingly urgent and sincere, if slightly unsure of his tone.

Most all of the secondary players, including airy tenor Miguel Evangelista as Hooker, the strident mill foreman, and soprano Melody Caspari as a friendly coworker, Sophie, are impressive. Picker’s effective use of chorus, as moral commentators sometimes incorporating familiar hymns, is evocative of similar devices that Benjamin Britten employed in the last century in his own operas.

Based on this splendid showcase by Cinnabar, together with the fine recording of the 1996 production by the Santa Fe Opera (with Patricia Racette in the title role), Emmeline more than deserves the enthusiasm of opera-goers and performers, and should receive a permanent place in the repertoire. Catch it while you can.