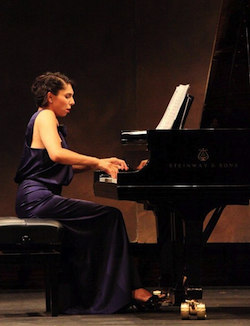 The opening weekend of the first-ever Classical Revolution Music Festival was appropriately baptized with benign weather and gemütlich venues, among them the intimate Salle Pianos showroom in San Francisco. It was there, last Saturday, enhanced by genteel potables and edibles, that Davis-based pianist Lara Downes presented a run-up to a recording project titled Exiles’ Café. Downes preceded her performance with an explanation of her theme, which showcases composers forced to leave their homelands and to work abroad. “It sounds like a sad thing,” she said, “but all of us are not where we started.”

From among the impressive instruments arrayed around the showroom, Downes was placed at a 1922 Schiedmayer baby grand. Though it wasn't the Bechstein she'd hoped for (which didn't get to Salle on time), it was gaily festooned on the outside of its case with fecund chinoiserie. She was garbed in a thigh-length gossamer dress and high, wide heels. Piano and pianist made for a rather exotic combination.

The first featured exile, Chopin, was represented by an early and a late Mazurka. Downes demonstrated a secure attack — one not inclined, toward the beginning of her program, to leave much air in her phrasing. Her choice of two pieces by Rachmaninov, Fragments and a Prelude, suggested that some of Chopin’s romanticism had persisted in the next century (as had the exile of composers). Downes continued to manifest a lovely touch with thoughtful balance between her hands, though leaving some listeners, like me, wishing she had made more of the theatricality inherent in these composers. (After the concert, Downes confided that the little Schiedmayer may have limited what she could have more fully realized on the full-sized Bechstein.)

Downes provided commentary throughout her program, introducing Prokofiev’s Sonatine Pastorale by noting its creation in Paris, where the Russian-born composer had bolstered his “refinement.” Although she may have meant to make a case for an ongoing influence of Chopin, I wished Downes had showcased the differences between the composers as strongly as she did their similarities.

“It sounds like a sad thing,” Laura Downes said, “but all of us are not where we started.” She effectively broadened her palate and deepened the dynamic impact by inviting up her younger sister, Avi Downes, for a four-hand reading of a trio of Rachmaninov piano pieces. Sibling communication and balance were prettily proven, with Lara hanging strong but fluid arpeggios over Avi’s lower-range melodies in the Barcarolle. The Romance manifested more emotional appeal and space than had some pieces early in the program, while the Waltz was sympathetically swayed.

Back on her own, the elder Downes ended with a pair of tangos, with which she appeared quite comfortable and able to tangibly convey her skill and affection for the music. Stravinsky’s was written while the Russian innovator was living in the U.S., and its spirit of fun seemed to draw out the performer. The second tango is from living composer Michael Sahl and is the source of the title for Downes’ CD, due out early next year. A bit evocative of Kurt Weill’s Youkali in its sweet sadness, it summoned Downes’ physicality, with fine results.

Jacobsen’s lively piece was a refreshing alternative to the testosterone-soaked tone of many of Ástor Piazzolla’s tango productions.

After a short break for sipping, snacking, and schmoozing, with representatives of the Portland (Oregon) and Baltimore branches of Classical Revolution in attendance, the San Francisco–based cofounder, Charith Premawardhana, took up his viola to join a virtuosic pickup group, with violinists Maxine Kuo and Jory Fankuchen and cellist Erin Wang rounding out the quartet. They proceeded to a delightful reading of the first two movements of Dvořák’s American Quartet, handily maintaining the evening’s theme while celebrating the composer’s 171 birthday and showcasing the Czech's enviable capacity to deploy a chamber ensemble to fascinating and entertaining effect.

The players closed things out with yet another tango, El viejito, by Sascha Jacobsen, Premawardhana’s bass-playing colleague and composer for the Musical Arts Quintet (which, incidentally, appears this Tuesday evening at the Freight & Salvage in Berkeley). Artfully voiced, Jacobsen’s lively piece was a refreshing alternative to the testosterone-soaked tone of many of Ástor Piazzolla’s tango productions.

The Festival continues this month with a score of concerts at a variety of hip locations around the Bay.