It would have been grand to have a few more opportunities to hear the opulent Cleveland strings, not to mention such glories as Robert Walters' English horn shining bright through dark passages of Shostakovich. 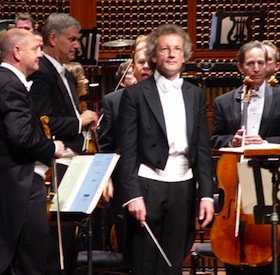 But first, a quick nod to the visuals. How comforting and civilized to see an orchestra all in white ties and tails (black gowns for all but two of the ladies), even if the decorum goes hand in hand with a middle-aged-plus lineup. (However long it's been since witnessing the rejuvenation of the Berlin Philharmonic, that example still is the gold standard.)

Then there are two clear impressions of Music Director Franz Welser-Möst, a superficial-visual and a substantial statement of opinion. His physical appearance channels Gustav Mahler — a slight figure in a tight fraque, his moderately bushy hair, those rimless glasses, and the unsmiling, professorial, severe mien.

More importantly, whatever controversies may bubble up around him (and there have been some since his arrival in Cleveland), he is firmly in charge, and the orchestra plays very, very well under his direction. Balances are excellent, especially if you like strings consistently up front, tempi are fleet and steady; no matter how large the orchestra, Welser-Möst has it all under control. He doesn't like silences, omits breaks between movements whenever possible, and there are minimal pauses otherwise.

Unfortunately, even a short break provoked some applause after the Shostakovich Largo. Otherwise, the audience was well behaved, silent until coughing started near the conclusion of the evening on Sunday, and giving the most challenging work of the two programs hero's reception. Or heroine's. 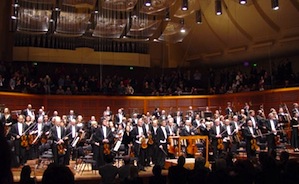 Kaija Saariaho's Cleveland-commissioned 2003 Orion is a stunning work. For many listeners (including this one), it takes a few minutes to get through the forbidding dissonance that opens the first movement, "Memento mori," but then the irresistible power of the music for a huge, Wagner-plus, orchestra takes over, and the rest grabs and holds.

The second and third movements, Winter Sky and Hunter, are grand, but it is the lengthy first movement that's truly special. It is a constant buildup — the burden of the music half-hidden under unceasing waves of the strings' rolling ostinato — leading to, I think, nothing, almost like Godot. But, just like that play, getting there (even if there is no there there) is an exhilarating experience that demands repetition.

My other favorite was also part of the Sunday program, coming immediately after Orion. Shostakovich's Sixth Symphony is a strange work: the Allegro and Presto are typical of the composer, with their bombast, irony, rafter-shaking sound, and the Cleveland played hell out of them. But it is the mysterious Bartokian night music of the opening Largo that is pure magic, and that's what Welser-Möst and the Cleveland made of it.

With the San Francisco Ballet presentation of George Balanchine's "Scotch Symphony" across Grove Street (first time in almost half a century), it was curious to hear the Cleveland's big, bright, and somewhat heavy Mendelssohn "Scottish Symphony," both being the Symphony No. 3, of course. Praiseworthy as consistency is in principle, just a bit more of Mendelssohn's romantic informality and natural ease should have emerged from under the stamp of Brahmsian uniformity.

Monday's glory — preceding Thomas Ades' giddy Jazz-Age spoof in "Dances," from the opera Powder Her Face, and three symphonic poems from Smetana's Ma Vlast (My Country) — was a grand reading of the Beethoven Violin Concerto, showcasing the brilliant soloist Nikolaj Znaider. He plays with machine-precision, but of a Tin Man whose wish for a heart has been granted in spades.

Znaider's big-big sound fits in so well with the Cleveland Strings, but the soloist leading exactly right. It's somewhat nitpicky, but perhaps necessary to say that the cadenza in the first movement lacked warmth (unlike Znaider's tone in the rest of the work), and that the opening tempo in the Larghetto dragged a bit.

And then Tuesday came, and the Cleveland was gone. Too, too bad. They should have stayed, at the very least, to play Orion again.