Mention the California Bach Society, and you might get a similar reaction to the one I received when mentioning its latest concert to a colleague: “Ah, yes — you’ll enjoy their program. They're a good amateur group." My friend clearly meant her description as a compliment, but the word amateur carries such invective in our modern parlance that it seems misplaced for this group. 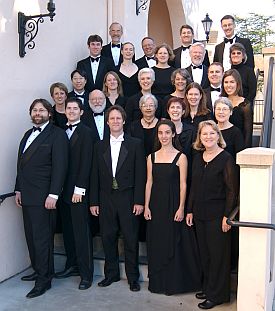 Since it performed music from 17th-century Italy in its concert Friday, why don't we adopt a term from that context? I propose dilettanti, which connotes none of the negativity that we might associate with the modern English term. A dilettante was someone who performed (or composed) with expert skill, and who, working solely for the love of art, expected little or no remuneration. Dilettanti held, in fact, a social position far more respected than did professional musicians.

The CBS deserves this appellation largely due to the efforts of director Paul Flight, who has been leading the group since 2006. Under its previous director, the group suffered from something of a ragtag presentation. Flight, however, seems to be coaxing the choir into an ever more balanced, clean sound, with pure vowels, good starts and stops, and none of the sagging pitch or fuzzy distortion at moments of enthusiasm and climax that one might expect from a volunteer choir. Its sound was careful, measured, and controlled, without being bland — a joy to hear.

Unfortunately, Flight's penchant for control ran a bit amuck at times. He insisted, for reasons unclear to me, on conducting through the recitative semplice of Alessandro Stradella's L'anime del Purgatorio, (The Souls in Purgatory) an oratorio that really might be described as an unstaged opera. Flight's measured treatments of these sections robbed them of loads of dramatic potential. Consider lines like the following:
Lucifer:
... My one mistake
robs me of heaven, exiled forever.

Angel:
Blasphemer, shut your mouth!
The theatrical possibilities here are evident. We would hope to hear the Angel exclaim suddenly and with ferocity, tripping over Lucifer's self-pitying lines. What we were treated to, however, was a carefully measured cadence from Lucifer, a preparatory beat from Flight, a nice clean breath, and beautifully produced inception to the Angel's tone. Elsewhere in the libretto, souls that were striving to get into paradise complained, "You are too stingy, oh heavens, with your blessings." Well, Flight was stingy, too, with his singers' opportunities for generating excitement. It was almost as if he didn't trust his soloists' competency.
Solo Singers Challenged
Of course, there was the small problem that the soloists were not, for the most part, fully up to their tasks. They fulfilled their choral roles beautifully, but didn't quite show the flair necessary for effective solo renderings. A couple of bright exceptions were cherub-faced Mark Bonney, listed as a "student intern" in the Society's program, who possessed a tone as bright and youthful as his countenance, and soprano Daun Hayes, who produced a dulcet sound and had a dramatic presentation that shone through in her recitatives, despite the constricted boundaries mentioned above.

Overall, the choral renderings were where the program's real strengths lay, and that fact made the first half the one that shone. Domenico Scarlatti's setting of the Stabat Mater fared well under Flight's direction. The music was easily the best on the program (which, other than the Stradella, featured some competent but uninteresting contrapuntal settings by Antonio Lotti), and was well-served by Flight's careful attention to the text's structure and semantics.

His interpretations employed affective caesuras where appropriate, and, in other places, rushed aggressively through unimportant cadences to get to crunchy, expressive dissonances. The chorus got some moments of virtuoso pageantry with Scarlatti's densely contrapuntal writing, which it rendered with clarity of horizontal musical line and, perhaps even more remarkably, with clarity of text in all the parts — further testament to Flight's acumen at choral leading.

In short, the CBS offered an exciting program, with some bumps. If it might find a few coins in the coffers to hire several "ringer" soloists, the group may well be able to add a bit of modern professionalism to its admirable status as capable dilettanti.

Jonathan Rhodes Lee studied harpsichord in New York, San Francisco, and the Netherlands. He is currently enrolled in the graduate program in historical musicology at UC Berkeley.