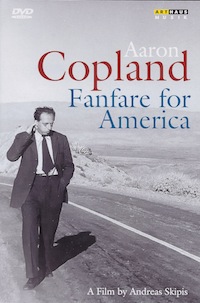 Doubtless few Americans head to a film/DVD about Brooklyn-born Aaron Copland expecting to hear German dialogue. While momentarily disconcerting (albeit less so than for a German hearing Schubert sung by someone born in the Bronx), it hardly impedes Andreas Skipis’ film with the hr-Sinfonieorchester (former Frankfurt Radio Symphony Orchester) from making its mark.

Part of the film’s success can be credited to its American conductor, Hugh Wolff. His orchestra does not sound as idiomatic as the New York Philharmonic, though it is as musically involving as the historic footage of Copland, Leonard Bernstein, Benny Goodman, and the Martha Graham Dance Company. Taking an equal place alongside them are extended English-language interviews with Wolff and the Copland biographer Howard Pollack (the latter on an elevated subway car, no less).

The other reason the film works is that, for once, the filmmaker resists the temptation to constantly sacrifice music for dialogue. Instead, on a progression of rapid cutaways, we hear and see sizable portions of Fanfare for the Common Man, Rodeo, and other major works from several periods. The straight-ahead editing may win no awards for originality, yet substantial musical examples over the breadth of Copland’s output actually enable us to hear what Wolff and Pollack are speaking about.

The biographical material, all of which was shot before the film’s initial release in 2001, is hardly complete. Copland’s  run-in with Senator Joe McCarthy during America's Communist witch-hunting era are touched upon — the excerpt from Copland's A Lincoln Portrait is quite moving in its affirmation of freedom — but his closeted homosexuality and its impact on his relationships with Bernstein and others is totally ignored. Nor do we end up with a full sense of the career devastation that McCarthy’s blacklists wrought, or of exactly how Copland managed to emerge with nothing more than a temporary banning of performances of his music.

What we do get are broad insights into Copland’s childhood, glimpses into his tutelage under Nadia Boulanger in Paris, and the influence of Gustav Mahler and of 12-tone music on his “distinctly direct American music” that captures the “pep and zip of American life.” For those wishing to delve more deeply into Copland’s legacy, this DVD is a nice jumping-off point.