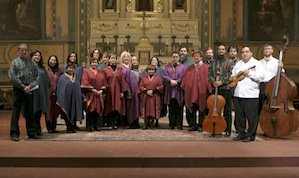 Coro Hispano de San Francisco observed the Epiphany on Sunday, in a concert at Mission Dolores Basilica celebrating the appearance of the Magi on Twelfth Night. Chorus membership comes mainly from Spanish-speaking neighborhoods, but is open to anyone who wants to sing Spanish folk and classical repertoire. The chorus is accompanied by Conjunto Nuevo Mundo (New World Band), which plays instruments both historical and modern, many of them uniquely Spanish.

The Epiphany story begins with the Nativity, so we didn’t get to the Three Kings until after intermission. Director Juan Pedro Gaffney Rivera, a master researcher, arranger, and translator, put together a long program ranging in time from ancient chant and Sephardic music to the 20th century.

One of the most recently composed pieces on the program was a Gloria from Missa Criolla by Ariel Ramírez (1921–2010), a gorgeous piece, engagingly sung, starting with the commanding sound of the cuatro (a small variety of guitar) and including the sounds of the Peruvian quenas (recorderlike pipes). It began with a choral section, continuing with a wordless choral oo to introduce a section sung by tenor Victor Floyd and baritone John Kendall Bailey, in solo and duet. Both sang with beautiful sound and pleasing musicality. The entire orchestra and chorus returned to finish the Gloria and close with the Amen.

By contrast, another striking piece was a Peruvian folk song sung in Quechua accompanied by a recorder ensemble, Cancion de los pastores (Song of the shepherds). The unusual song, arranged by Gaffney Rivera, began as a dialog between the sopranos and altos and continued with a contrasting movement characterized by changing rhythmic patterns.

Las mañanitas Guadalupanas (Morning-songs to Our Lady of Guadalupe), 19th-century Mexican songs, were combined as one piece and sung in a lovely arrangement by Gaffney Rivera. Tenors began a cappella, then women’s voices came in, and finally all the voices and instruments, including a solo by alto Jillian Picazo.

A Star Leads the Way

The narrative of the three kings, Pois que dos reys, by Alfonso el Sabio (13th century), began the second half of the concert. The fine soprano Cecilia Engelhart Lopez gave eloquent voice to the telling of the story, the chorus punctuating it with a repeated refrain: “Since our Lord wanted the kings to spread the word, He caused a star to appear.”

Herod’s vicious response to his encounter with the Magi was deplored in Hostis Herodes ímpie (Wicked enemy Herod) by Juan Navarro (1530–1580). This was the only chorus sung entirely a cappella, partly in unison chant and partly in harmony. While the intonation was not flawless, the unaccompanied choral sound provided a welcome and effective change of color.

The unaccompanied choral sound provided a welcome and effective change of color.

A number of popular songs were sung with gusto by chorus and soloists. Among the soloists were several excellent character singers, acting out their parts with panache. In Las posadas (the Mexican story of Mary and Joseph’s search for a room), Jesús Guillén was Joseph, arguing with Mark Hernández, the impatient innkeeper who had no rooms available. At the end of the dialog, the chorus sang an apology and a welcome to the holy travelers, and the audience was invited to join in.

Victor Floyd, who sang so movingly in the Ramírez Gloria, sang Válame Dios (God, look how those angels dance as they fly) with approximate intonation and rambunctious energy. And it was fun to watch chorus members dance as they sang the 20th-century Cuban Christmas song Cantándote un son, by Roger Hernández.

For a polyphonic encore, which the Coro has been singing for 37 years, alumnae were welcomed on stage to sing. The people on stage and many in the audience felt like one big, happy family as the concert came to a close.