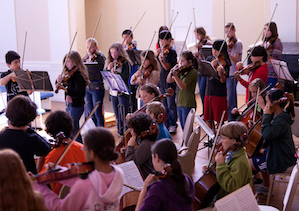 The future of the very young musicians from the Crowden School trumpeted bright at the school’s 30th Anniversary Concert in UC Berkeley’s Hertz Hall on Saturday night. But beyond the students’ own performance that evening, additional and conclusive proof of their tomorrow was evidenced in the first-half performance by the school’s now-professional alumni.

Two fine violinists, well advanced in major careers, Owen Dalby, a 1998 graduate of Crowden, and Kenneth Renshaw (Crowden, 2008), led off with a lucid, musical, and finely honed performance of Bach’s “Double Concerto,” for Two Violins in D Minor, accompanied by an orchestra of faculty and alumni. Then came The Ring of Brodgar, a cello sextet, by the late Colin Hampton, cellist with the Griller Quartet, in residence at UC Berkeley 1949-1961. The six who drew out beautifully the single movement’s dark, brooding eloquence were Cathy Allen, Deirdre Cooper, Bonnie Hampton, Emil Miland, Monica Scott, and Eugene Sor.

Mozart’s E-minor Violin Sonata, K.304, Allegro/Tempo di Menuetto surrounds its serious interior mood with a gracefulness to start and later a charmed Trio that sounds as if it were originally a blithe song. Renshaw played it lyrically, his tone refined, and Miles Graber, of the faculty, kept the piano part wedded to the violin with a delicate elegance.

All was string-playing that night, of course. That was the focus of the school concept the late Anne Crowden initiated in the basement of Berkeley’s University Christian Church 30 years ago. That is faithfully continued in the Crowden Music Center at Rose and Sacramento Streets. So it was entirely appropriate to conclude the first half with Vaughan Williams’ Fantasia on a Theme by Thomas Tallis. It was altogether fitting in its eloquence realized by the clear, resonant, and moving performance of 31 friends, faculty, and alumni in the first orchestra and nine more in the second or “echo” group. Eugene Sor conducted with security, insight, and authority.

The students’ turn began with two string quartet pieces by very recent graduates and composers of exceptional promise. Dream Sequence by Lauren Grace Bare, a former student in the school’s John Adams Young Composers Program, now a high school sophomore, is a charmed fantasy with a fine musical line tracing the dream. Jo Griffin, (Crowden, 2012), is a violinist headed for three major summer institutes. Her one-movement String Quartet in D has a rich texture. Her craft, evident in the harmonic structure and style and though drawing on late Romantic idioms, is not at all derivative. The work won the 2013 National Young Composers Challenge. Both pieces were played with fine ensemble and expression by the Baumer String Quartet of Nathan Olson and Aaron Requiro, violin; John T. Posadas, viola; and David Requiro, cello.

It was time for the School’s Allegro Chorus to shine — 38 of the current fourth through eighth graders who receive their academic as well as musical instruction at Crowden. Laura Kakis Serper is their effective chorus director. They came trotting on stage in brightly colored T-shirts to sing the Spanish words of the Octavio Paz poem Concierto en el jardín to the music of música by Samuel Carl Adams(Crowden, 2000). Commissioned for this concert, this was its premiere. It has a haunting, insistent quality rooted in the repetitive trochee, long 'short' elements in the poem that Adams exploits with dramatic effect. Initially the word llovió (“it rained”) is hammered relentlessly (pictorially of course), as other words and phrases are singled out. The treble voices in unison were affecting. Adams’ music for string orchestra and internal quartet plus piano is developed with arresting textures and a clarity of rhythm and larger design that give the piece strength and expressive effect. Adams led the performance intensely. He’s a calisthenic conductor to be sure, but he did achieve the needed energy and precision.

Finally, the whole stage was filled with string players, students, faculty, alumni, friends — 122 of them including a battalion of cellos (34 cellos is a battalion for sure) in a smack-down, all-out whirligig, and a surprisingly, vigorously crisp performance of Leroy Anderson’s Fiddle Faddle. It was led with sure hand by Crowden’s Executive Director (and violin teacher) Doris Fukawa. She was the evening’s hostess, earlier greeting the audience and leading this signal and most worthy celebration.