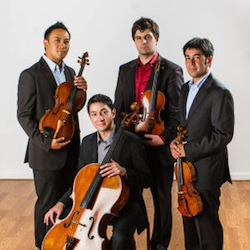 “Community” is the operative word at the Crowden Center for Music in the Community (CCMC) in Berkeley. As one of the two divisions of The Crowden School (the other one being a day school for grades 4 through 8, with an emphasis on music education), CCMC offers music lessons and classes for children and adults from all over the Bay Area during after-school hours, on weekends, and during the summer. And concerts that are free to the public.

One of the elements of the summer program is a two-week Youth Chamber Music Workshop, during which Crowden faculty members take string and piano students, ages 13 to 22, through an intensive course focused on ensemble playing and the study of the masterworks of chamber music. Closing concerts by the students will be given on July 18 and 19 at 6:30 p.m., but last Friday the Chamber Music Workshop’s faculty members (several of them Crowden alumni) gave their own concert. During the workshop, as well as during the concert, performing faculty members included Liana Bérubé, Lisa Grodin, Evan Price, Jory Fankuchen, Eugene Sor, Jeffrey LaDeur, Robert Waters, and Arkadi Serper. They were assisted by guest artist faculty members Nathan Olson, Aaron Requiro, JT Posadas, and David Requiro, who together form the Baumer String Quartet, which has deep roots in the Bay Area.

One of the objectives of this faculty concert is to expose students … to as much chamber music repertoire as possible.

One of the objectives of this faculty concert is to expose students, who, with their friends and relatives, formed the majority of the audience, to as much chamber music repertoire as possible. That generated a “Clash of Titans” of sorts, with juxtaposed masterpieces from Schubert, Mozart, Brahms, Fauré, Bartók, and Tchaikovsky. The works performed were mostly given in single movements pulled from larger compositions, such as Mozart’s String Quintet in G Minor, K. 516; Brahms’ Piano Quintet in F Minor, Op. 34; Fauré’s Piano Quartet in C Minor, Op. 15; and Bartók’s String Quartet No. 1, of which the Baumer Quartet performed the third (and last) movement.

The mood of the evening may have been light and casual, but the music certainly was not. Taking single movements out of their usual musical context and putting them together in a concert program works, up to a point, but also generates issues of overload, at least for this audience member; going from a heavy dose of a Brahms quintet to a solid helping of a Bartók quartet was quite a lot to process.

Nevertheless, the program came over nicely. More rehearsal time would probably have created more nuance here and there, but the difference would have been relatively marginal. As it was, the music was wonderfully spontaneous and refreshing. And where else than at a Crowden Faculty concert would one ever have the chance to hear such a fine sampling of excellent, and very well performed, chamber music?

The mood of the evening may have been light and casual, but the music certainly was not.

To name a few highlights: The concert opened with a bang with Schubert’s Quartettsatz, from 1820, itself the opening movement of a string quartet that the composer never finished; piano teachers Arkadi Serper and Jeffrey LaDeur played a fantastic version of Debussy’s Fêtes, from his orchestral composition Trois Nocturnes, in a brilliant arrangement for two pianos by Ravel; and a great and pleasant surprise — not to mention a welcome bit of levity — was the arrangement for nine string players (the entire workshop string faculty) of Palhaço, a piece by Brazilian composer Egberto Gismonti (b. 1947), who studied with Nadia Boulanger and whose music is a blend of classical music along the lines of Heitor Villa-Lobos and Alberto Ginastera, of jazz, and of all the overlapping Latin American and Brazilian folk music styles you can imagine.

It seemed unlikely that the first movement of Tchaikovsky’s string sextet Souvenir de Florence could top the Gismonti piece as a concert finale, yet it did exactly that. This boisterous and vibrant composition is a fantastic piece of music, and it was the perfect finale to a wonderful and eclectic evening of chamber music.