Musicality, discipline, and good programming were much in evidence Friday evening as the San Francisco Girls Chorus presented "Music Fit for a Queen," consisting entirely of music from the British Isles, all sung from memory. The first half was devoted to rarely heard music, the second half to more familiar works. On top of that, Director Susan McMane added a little theatricality, taking advantage of Calvary Presbyterian Church's interior architecture. As an encore, McMane selected "And a Nightingale Sang in Berkeley Square." 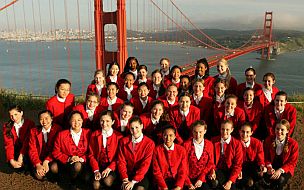 The second part consisted of four choral sections of the nine movements in Henry Purcell’s great Come Ye Sons of Art birthday cantata; arrangements of one English and two Irish folk songs (The Waters of Tyne, Danny Boy and Follow Me Down to Carlow), and, as the concluding hoot, three well-known bits of glorious nonsense from Gilbert and Sullivan operettas: "Comes a Train of Lovely Ladies" and "Three Little Maids From School" from The Mikado, plus "Dance a" from The Gondoliers.
Great Britten
Britten’s setting of the Latin Mass — minus a Credo, hence the "brevis" — stood head and shoulders above the rest of the first half. Originally written for boys choir and organ, the work was composed while Britten was working on his opera A Midsummer Night’s Dream. Its five movements are uncommonly well-balanced for a Mass, and sounded perfectly suited to female voices. What’s surprising is the complexity of the score.

The Gloria, for example, has scrambled meters amid its basic 7/8 time signature. That’s tricky even for grownup professionals, in the pat-your-head-and rub-your-tummy tradition. For Britten to have been that uncompromising must indicate that he had enormous faith in the capacity of children when challenged. The Girls Chorus took on that challenge with relish. You could pick out a tad of insecurity here and there — but only a tad. Supporting the performance, Susan Soehner displayed an excellent command of the organ, which she also showed in accompanying other works on the piano and harpsichord.

In 1977, Tavener was received into the Russian Orthodox Church, and in the process switched from writing mock-Stravinsky to mock-medieval music. He’s gained a reputation in England, largely via his successful operas and choral works. But what bothers me, aside from his arch-conservative approach to melody and harmony, is his lack of freshness. To me, it always sounds like just that piece again, which may account for McMane’s adding some visuals in a quest for variety. She placed the young singers on the U-shaped balcony surrounding the auditorium for extra richness of sound, which included a few handbells played near the coda.

The two Marian anthems, "Blessed be Thou" (13th century) and "Royal Virginal Flower" (14th century) were pretty enough. But they were also a little monotonous despite the latter's polyphony, of an early type called organum. All the verses are set to one small, repeated tune. McMane had the singers in the aisles, right and left, to heighten the experience.
Black Elk Tropes
Composer MacMillan, who is Scottish, chose a most unusual text, an English translation from Lakota chant, drawn from the historic Black Elk Speaks collection. He also added a phrase from the standard Latin Te Deum text to end each of the poem's five stanzas. It's sort of like the technique Britten employed in the War Requiem, interpolating English poems between major sections of the Latin Requiem.

Purcell’s 33rd-birthday present to Queen Mary in 1694 was an important piece of high Baroque art. Come Ye Sons of Art helped establish a standard for communicative choral music that was passed all the way from Handel to Britten. (In this case, it might well have been retitled, Come Ye Daughters of Art, no?) To support the Purcell performance, McMane added a small orchestra consisting of flute, oboe, string quartet, and harpsichord, though she omitted most of the purely instrumental sections.

The folk songs were lovingly presented, with no attempts at fake accents. Soehner supported the first and third song on the piano, while the central Danny Boy was sung a capella. That turned out to be an especially lovely showcase for the girls' beautifully balanced choral timbre and impeccable intonation.

What left me gawking was the G&S section, performed without conductor. Not only were the ensembles flawless, but the songs also preserved much of the traditional choreographic hand gestures. In "Three Little Maids" the chorus divided into three separate groups, one for each maid. That they managed this with nary a slip, was awesome.

But as that great line from William Faulkner put it, “Ain’t it marvelous what a body can do.”