Some things in life are perfect and should never change. For me they are the first whiff of fall, the creamy bite of chocolate cake, the zing of a great wine — and watching the Lamplighters Music Theatre perform Gilbert and Sullivan's The Mikado, especially as it was viewed Friday night at the Lesher Center for the Arts in Walnut Creek.
This is Lamplighters' 56th season, and yet I can still recall their Mikado of nearly 50 years ago when they were singing before cardboard cutouts in a storefront on McAllister Street in downtown San Francisco. As primitive as it was, that production instilled in me a great love for G & S, which has lasted to this day.

So, it was with a sense of shared pride that I could sit back and enjoy the opulence of the current production, with a unit set of striking black and gold portals flanking an elaborate tansu-like tower. Since this wry comedy takes place in a make-believe Japan in a make-believe time, costumers Beaver Bauer, Melissa Wortman, and "Emilica Sun Beahm" enrobed the women in bright kimonos with fantasy embroidery, the men in earth tones and darker coats. Ellen Brooks' lighting gave them all a fresh glow. 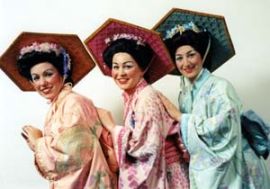 Three little maids in a 1997 production of The Mikado

Equally important was the quality playing of Sir Arthur Sullivan's spirited melodies, with Music Director Baker Peeples allowing his listeners ample time to enjoy the many passages of plush strings, poignant horns, and spiraling woodwinds, yet avoiding the bouncing-ball gait that often plagues this highly rhythmic score.
An Artful Blend
To be effective, Gilbert and Sullivan demand the artful mix of serious singing and serious lampooning, a blend uniquely their own. Tenor John Brown caught the style perfectly as Nanki-Poo, his voice easily caressing Sullivan's lovely ballads while delivering Gilbert's deadpan puns ("she was betrothed to a cheap tailor ... I saw my suit was hopeless"). He was especially effective in "A wand'ring minstrel I," as well as in his subsequent duets, trios, and ensembles. 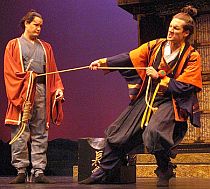 John Brown as Nanki-Poo and Chris Uzelac as Ko-Ko

The object of his affection is Yum-Yum, in this performance the sweet-voiced Elena Krell (some of the leads are double-cast). Krell was a pert partner, always clear in her articulation, and she sang a beautifully shaped aria "The sun, whose rays are all ablaze" (perhaps best known for its refrain "the moon and I").

As one of the "three little maids from school," Krell was joined in this performance by Allyson Paris as Pitti-Sing and Rose Frazier as Peep-Bo, the girls full of happy voice and giggling manner. Baritone Paul Murray was a dignified Pish-Tush, and his singing of the madrigal "Brightly dawns our wedding day" alongside Krell, Paris, and Brown was one of the musical highlights of the evening.

Bass-baritone Charles Martin was the condescending Pooh-Bah, the aptly named politician who holds the titles of Lord Chancellor, Lord Chief Justice, and Attorney General, and is the bearer of Gilbert's satire against corrupt officials and antievolutionists. Martin also shares the title role of the Mikado with Ray Thackeray, who at this performance won laughs and spontaneous applause for his bloodthirsty "A more humane Mikado never did in Japan exist" while grimacing, growling, and kicking up his heels to the refrains of "My object all sublime ... [is] to let the punishment fit the crime."
Condemned for Flirting
The point of this absurdist comedy is that the Mikado has decided flirting should be a capital offense. As a result, the Japanese jails are jammed. Thus, the villagers agree to the expedient of taking one of the fellows now jailed to be their executioner, and thereby fulfill the law by executing himself, Gilbert's aim being those politicians who make laws but never intend to abide by them.

So it is the character of Ko-Ko, the village tailor-cum-executioner, who is at the center of the scheme to execute Nanki-Poo instead, not knowing he is the son of the Mikado in disguise. Tenor Chris Uzelac, however, seemed to confuse his character with caricature, his Ko-Ko full of fussy posturing and such mincing that Gilbert's sharp irony was often blunted. And while Ko-Ko's "little list" of those who should be executed for civic annoyances drew titters, it was his contemporary irritants that drew genuine laughs (an unpopular war, radio Republicans, car phones, and iPods, among others). Uzelac was much more effective when he later stopped being a Pee-Wee Herman, and simply sang a sincere "Willow, tit-willow," earning him his most enduring applause of the evening.

Another nontraditional style was that employed for Katisha, the usually portly lover of Nanki-Poo, and much like G & S' matronly Buttercup in HMS Pinafore, Ruth in The Pirates of Penzance, and the Fairy Queen in Iolanthe. Instead, Cary Ann Rosko was a slim and terrifying figure, shimmying and shaking beneath a huge Kabuki wig in the first act, and dressed as a spider-woman in the second. (Perhaps like Ko-Ko, her interpretation was more the choice of Phil Lowery in his G & S directing debut than that of the singers.)

But toward the end of the evening, Rosko, now beautifully costumed like a Japanese doll in a glass case, dropped her guise and sang an elegant and moving "Alone and yet alive." She was also highly effective in her final duet of appeasement, "There is beauty in the bellow of the blast."

Two other innovations were an onstage taiko drum for the Mikado's noisy entrance, and the use of supertitles for the songs.

It was a memorable show — or, as Gilbert might have said, a daft tale deftly told.