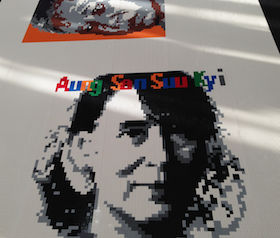 A kaleidoscopic night of festivity and irony, Friday’s official opening of the massive site-specific exhibit “@Large: Ai Weiwei on Alcatraz” celebrated the famed Chinese dissident artist by calling attention to his absence. “Ai can’t be here,” read the message on the back of curator Cheryl Haines’s fancy, glittering jacket, and it was a sorry pun indeed. Ai Weiwei is under a sort of house arrest in China; the government took away his passport so he can’t leave the country. This followed his 81-day police detention in 2011, when nobody knew whether he was dead or alive.

So now Ai isn’t in prison, but he also can’t be here at the prison (it closed in 1963), now a national park where are installed three eloquent reminders of his condition and that of countless others. Among the show’s seven installations are TRACE, his Lego portraits of more than 170 past and present political prisoners, arrayed on the floor of what used to be the prison factory; Refraction, a gigantic but flightless wing made of Tibetan solar panels and tea kettles, which can be seen through the cracked and crazed windows of the gun gallery that was used to monitor the factory’s prisoners, and a wondrous exhibit of paper kites held captive within prison walls, the most stunning of which is a huge, brilliantly colored dragon whose countenance is at once celebratory and furious. 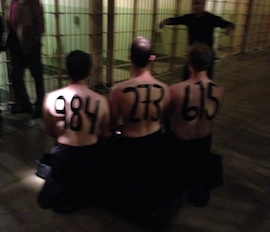 All of these were on view Friday for an audience that included guests who paid $2,000 a ticket. Their donations went to Haines’ For-Site Foundation, which created the $3-million-plus exhibit, as well as to Amnesty International, Golden Gate National Parks Conservancy, and Human Rights Watch.

In the course of the evening it was possible to look at Ai’s Lego portraits — which include Aung San Suu Kyi, Nelson Mandela, Edward Snowden, and Dr. Martin Luther King — while nibbling on blinis and caviar and sipping champagne. This is, of course, the nature of the world; consider cocktail parties at the United Nations, which gave us the Declaration of Human Rights, whose words are reprinted in the Ai Wei Wei catalog. We can honor dissidents and freedom fighters, heroes and heroines, and mourn their loss, and have a drink at the same time. It just might feel a little ... strange.

Which brings us to Speaking Volumes, the evening-long site-specific movement installation created by Brenda Way, in collaboration with RJ Muna, KT Nelson, Kimi Okada, and ODC/Dance. ODC dancers were joined by dancers from other Bay Area companies. The installation was plural; dancers were on pathways, standing and gesticulating on benches, and at gateways at various of the prison art sites. The common motif was the words, written on large sheets of paper around the dancers and often torn or crumpled into illegibility, or simply ripped asunder. So much for freedom of expression. Yet within these sheets, the dancers were vividly alive, in constant motion, whether mournful or defiant, creeping or running, or captive as a storybook doll, like the woman in the huge word-imprinted skirt who greeted guests at the factory door, waving her arms and bending her torso. 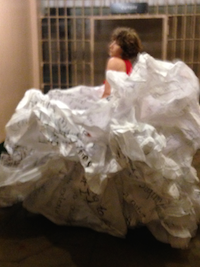 Most of the dance was in the cell house, which once held 600 prisoners. In one cell, a woman crouched with paper crushed and crumpled around her, under her, over her. A lonely figure in a red leotard, she flailed in her sea of newsprint, yet managed to keep her head above the tide.

Her cell was one of the tiered dozens flanking the main aisle the prisoners of Alcatraz called Broadway. On Friday the aisle became a red-carpeted dance runway. Down it walked a sorrowing woman in white, eyes cast down, muttering to herself as she buttoned and unbuttoned her shirt over and over. Too, a solo man in white, moving slowly as if guarding his quiet dignity in the middle of mindless cruelty. Later, a man hauled a dolly with three black-shrouded men huddled on it. When it stopped, their coverings were removed and a woman with a big brush painted black numbers on their bare backs. Now they walked, in long skirts, so we could see them and their numbers plain. They did not look afraid; if anything, they looked determined. Their posture was reminiscent of sculptor Auguste Rodin’s The Burghers of Calais, his tribute to courage in captivity.

Suddenly, the red runway filled with runners in white, racing, legs hammering, down its length, frantically dodging here and there, halting, huddling, moving again as onlookers pressed themselves against the bars to let them pass. They ran a long time, up the runway and down again, as if looking for escape.

Brenda Way, in black, sat watching from one end of Broadway. “It’s a very powerful and disturbing environment,” she said. “I find it hard to be celebratory, even though it’s a festive occasion.” The exhibit continues through April 26. But Way’s dance, for all its eloquence, has ended.