Opera San José’s production of Mozart's Magic Flute, seen Saturday, got me thinking about the issue of time in opera. Not the minutes that we, the audience, spend in our seats, but how time is portrayed on the stage and how the singers as actors must accommodate that flow.
What it comes down to is that portrayed time within an act of a spoken drama is fairly close to real time, while in opera real time gets suspended whenever an aria explores the emotional reaction of a character to an event. The important question is, what staging and gestures will the singers and the director work out for these moments of suspended time.

While some singers, with highly trained voices, merely walk on stage and do mediocre acting, when you do get the whole package of singer and actor rolled into one it is electrifying. As it happened, Jose Maria Condemi's production was pretty good and, in a few members of the cast, we even got a glimpse of the entire package.

Music Director Barnaby Palmer set some ambitious tempos for the orchestra. He pushed the andantes faster and the adagios slower. This created a fresh contrast between certain numbers. The orchestra, for the most part, could hang on for the robust andantes, though they gave the singers a bit of trouble. The three ladies (Heather Clemens, Cybele Gouverneur, and Tori Grayum) got tripped up on their overenunciated German consonants. Monostatos (Bill Welch) was at the end of his chain trying to keep up with the rambunctious allegro.

Even when the tempos were not at the extreme end, however, the singers and orchestra often struggled to stay in step with each other. The orchestra itself was quite good, though the strings got a bit ragged in a couple of spots. Kudos to principal flautist Isabelle Chapuis for her limpid playing during Tamino's flute solos. 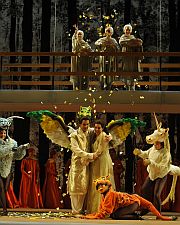 Isaac Hurtado as Tamino and Rochelle Bard as Pamina

All photos by Pat Kirk

Rochelle Bard's singing of Pamina was sensitive, lovely, and agile, but she must be careful not to overuse her impeccable pianissimos — the strong suit of her type of medium-size, lyric soprano voice. She portrayed Pamina as girlish and sincere, which certainly lies within the range of possibilities, but I wanted a little more nobility, a bit more spice. After all, she is her mother's daughter.
Cutting a Fine Dash
The Ukrainian-tinged dialogue of Svetlana Nikitenko made her Queen of the Night into a hot study in exoticism that was tempered in her cold, steely coloratura. Isaac Hurtado's Tamino went above and beyond the call of duty. Like a Prince Charming incarnate, he cuts quite a figure on stage. His singing is based on a solid, mellifluous legato that never falters, and his money-notes are worth every penny. In a word, he is the complete package, a singer to keep an eye on over the next ten years.

The Sarastro, Carlos Aguilar, possesses a rich voice, but struggles on the high notes. The bottom of this challenging bass role is set a little low for him. 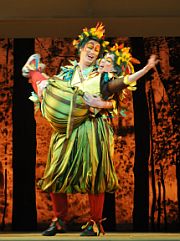 Kenneth Mattice's Papageno was charming and animated. He has a well-grounded baritone voice. His comedic timing and physical comedy need a little work. His moment of delight at finding another oenophile in Papagena, however, was spot-on and got a unanimous laugh out of the audience.

Jillian Boyce as Papagena was delightful, disguised as the old woman with a funny old-crone voice. The three ladies did well in these often underappreciated roles. The ivory-and-gold-dusted three spirits were nicely matched for a pure, clean sound, and their petite stature made an enchanting contrast to the rest of the cast.

Lydia Mayne holds an undergraduate degree in vocal performance and a master of arts in musicology from the University of Utah. She is currently studying the history and aesthetics of opera at Stanford University.