Even Cal Performances' starrier guests don't routinely sell out Zellerbach Hall. But more than two decades into his high-profile career, Joshua Bell's name still deservedly wields an uncommon pull, and it was to a capacity audience that he and pianist Jeremy Denk played on Sunday afternoon. The duo's Berkeley recital represented the one Northern California blip in a taxing tour (tucked in between a Costa Mesa concert on Saturday night and a Palm Desert one Tuesday). I hope the blame for a vexingly uneven recital may be assigned at least partly to fatigue.
For all the annoying merchandising — all major-label soloists are packaged, though in his case the marketing folks have been unusually determined — Joshua Bell is a reliably interesting violinist. The slender but true sound, the narrow vibrato, the uncanny evenness of tone over the entire range of all strings: These are the bases of a distinctive, if sometimes willfully understated, musical profile. 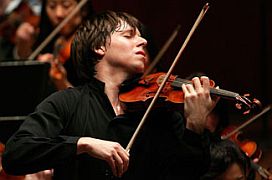 Bell has always had a winning way of disguising his virtuosity instead of displaying it. The most astonishing things he does are generally handled so unobtrusively that you perceive them only retrospectively or by comparison. His art runs the danger of being too subtle to notice; the magician really ought to be sure you've seen the rabbit first before he makes it disappear.

If you were to strip away the sizzling vibrato and the slashing bow and the throaty high-up-the-G-string sound from most violinists, not much might be left underneath. The thing about Bell is that once you get past the obstinately undramatic nature of his virtuosity, you generally do find an interesting musical mind at work. Not an infallible one — I remember one outright disaster of a Bach E-Major Concerto a few years back — yet one that has pretty reliably steered clear of vapidity, a decade of recording for the crossover-obsessed Sony label notwithstanding.
Crossing the Line
Certain aspects of Sunday's recital, though, made me wonder whether Bell's facility is finally getting the better of him. His reluctance to indulge in the more usual sorts of razzle-dazzle, which can be so refreshing in the big concerto repertoire, sometimes takes on an aloof, even narcissistic tinge in recital. The line between refinement that draws the audience in and refinement that seals the audience off isn't always so clear, but Sunday I thought Bell spent much of his time on the far side of it.

The opening Tartini "Devil's Trill" Sonata was not encouraging. In the slow movements Bell affected a wan, gauzy sound, helped not at all by Denk's delicate, mincing playing of the continuo realization. His vibrato was circumscribed and unvaried, and it tended to kick in only after the start of a note, giving the beginnings of phrases a curious flatness. In the same way, the vibrato petered out almost apologetically on phrase-ending notes.

The fast movements were better, alert and nimble, though frustratingly enough some of Bell's dazzling fingerwork was vitiated by light, sketchy bowing that didn't project well even to my front-of-orchestra seat. The trills of the title, which happen in the finale, were not always audible (though those that festoon the second movement were terrific — light, neat, seemingly effortless).

Bell embellished his part sparingly, in the main adding double stops rather than elaborating the line, and contributed what I presume was his own cadenza in place of the familiar Kreisler one. It was brief but well-supplied with the virtuoso's raw meat, and welcome after the peculiar placidity of most of the rest of the piece.

The same sort of bleached remoteness afflicted the Dvořák Four Romantic Pieces after intermission. The pieces are reworkings of a clutch of bagatelles for two violins and viola, originally written for amateur string-playing friends of the composer, and they remain simple and somewhat repetitive in their violin-and-piano guise. Guileless Romantic warmth is what they need, and didn't get; Bell's pale, smooth playing was too blank even to come off as subtle.

That was true, at least, until the last, longest, and slowest of the four. There Bell's steadily drooping lines, subsiding ultimately to a bare thread of sound, achieved a dusky poignancy. But the chief pleasure of the set was Denk's natty, deftly inflected account of the piano parts that Dvořák fleshed out from the original accompanying string lines.
Commanding Keyboard Partner
Denk was a distinct asset, too, in the rest of the program. In Prokofiev's F-Minor Sonata, where the pianist carries at least half the argument, he was a commanding presence. He gave Bell — who can produce a penetrating fortissimo when he wants to — a run for his money in the Scherzo, and nearly succeeded in covering him in the moto perpetuo parts of the finale. But his range of color is wide, too. The eerie smoothness of the third-movement Andante was marvelous, with Bell's muted violin gliding over it, a spectral presence.

Elsewhere Bell took some getting used to in this music. There was a wispiness to the quiet playing and a strained shrillness to the loud sections that were alike far removed from the dense, gritty tone that generations of Soviet and post-Soviet violinists have led us to expect. The barely held together variousness of the piece, particularly its meandering outer movements, was more obvious than usual. But there was much of the old Bell wizardry (the famous whistling scales of the outer movements were one instance, the strange rows of double stops in the first movement another), and it was never less than interesting.

Grieg's C-Minor Third Sonata brought back the old, consistently engaged Bell in full. You might have found yourself wishing occasionally for meatier sound, but it would have been hard to improve on the limpid, serenely sweet tone of the "alla Romanza" central movement. The outer movements, for their part, were fiery, impetuous, and undeniably alive, thanks not least to Denk's superbly sonorous partnering.

The two encores seemed to sum up the situation so far as Bell's playing was concerned. First came the violinist's own arrangement of Fauré's Après un Rêve (as heard on his last Sony album, Voice of the Violin, which you can listen to online): an unadorned transcription, played once again with that disquieting, inexplicable, immaculate disinterest. And then: Heifetz's transcription of the March from Prokofiev's Love for Three Oranges, brought off with exhilarating glitter and swagger.