David Sloss and the Fremont Symphony proved last weekend that the rave review for the Fremont Opera's inaugural production of La Bohème last year was not the result of a fluke. This time, the fledgling but impressively talented company took on Rossini's Barber of Seville, also one of the most popular — and therefore "transparent" — operas, singing it in Italian, with English subtitles. 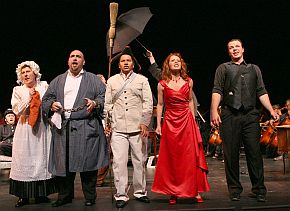 Surprise, surprise: Much of the Sunday matinee was on par with performances at some of the big old opera companies. And an even larger slice of it had the kind of vitality and freshness that's too often lacking in those big old opera houses.

Sloss and the Symphony have been together for more than a quarter century, and they have learned to sing music with a shared breath. High points of the Sunday performance included those breakneck, impossible Rossini ensemble numbers — every musician, every singer doing the equivalent of the 100-meter dash, and bringing home the gold. The crazy Act 1 finale and the wedding scene brouhaha in Act 2 were equal parts musical virtuosity and comic excellence. 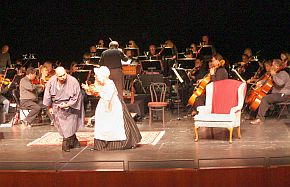 Fremont's costumed "semistaged" production, with a large orchestra upstage, and the singers downstage (or, at times, in the midst of the audience), is an unusual and dangerous approach. The orchestra could easily overpower the singers, the semibroached fourth wall may appear too porous, and so on, but here it worked very well.

Credit goes to Sloss, both as a knowing, low-key, effective music director and as a genius of casting. He got first-rate singers for a company that only a year ago "had two board members, an empty bank account, and a mailing address, but no letterhead yet."

Kudos are also due to stage director Jonathon Field, who produced a laugh riot though without excess, despite working with limited resources in Ohlone College's functional but rather basic Smith Center. 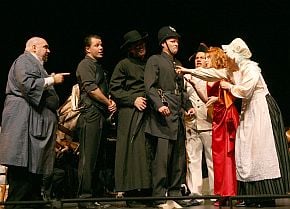 Just one example of the Sloss-Field ingenuity: Without a large chorus, the arrival of the police sounded like the armed wing of the Mormon Tabernacle Choir. How? Well, the orchestra sang the role.

There were "old friends" in the young cast, singers well-noticed previously in the San Francisco Conservatory of Music or the S.F. Opera's Merola Program, such as Elezar Rodriguez as Almaviva, Nikki Einfeld as Rosina, Eugene Brancoveanu in the title role. Yet for me this was a performance dominated by two relatively minor roles: Kirk Eichelberger as Basilio and Jason Budd as Bartolo. 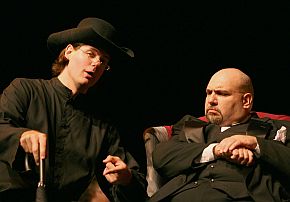 I wish this were already the (not-too-distant) future in which MP3 snippets are attached to a review, so you could hear Eichelberger's "La calunnia" — an incredibly gorgeous musical performance of what is usually "only" a comic/character aria. This true bass, who is also an outstanding baritone (not a bass-baritone, but both, separately), is already singing minor roles at the Metropolitan Opera, and he will be progressing to the majors in no time at all. And yet, I can imagine someday listening to him in a big role at La Scala, and thinking, "I remember his Fremont Basilio!"

Bartolo, the bad guy of Barber, is a tough role, both musically and dramatically in its requirement to maintain believability instead of escaping into a caricature. Budd, perhaps the only newcomer to the Bay Area music scene in the cast, sang a performance-long crescendo, his voice peaking steadily, his committed acting commanding respect even in the midst of hilarious buffoonery. 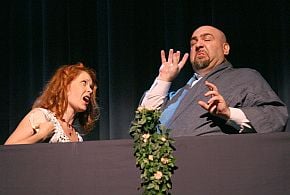 Master Budd (Bartolo) at his exercise, beating up on Rosina (Nikki Einfeld)

Given the historic choice for Rosina between casting a "coloratura mezzo" and a soprano coloratura, Sloss opted for one of the highest of sopranos around, Einfeld, with her effortless staccato high D's or even (if I heard right) F's. For her, the aria "Una voce poco fa," transposed for sopranos to F-major, is merely the "base" of her range. The high notes and the quality of voice were spectacular, even against some uncertainty in Act 1, when Einfeld appeared to try too hard both vocally and dramatically ... until she found exactly the right place in the music, onstage. The music director's choice of the post-Rossini, razzmatazz version of Rosina, "full of cadenzas, fioritura, and high notes," paid off. 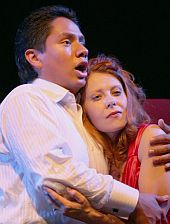 Rosina and Almaviva find each other

Rodriguez is a special talent, with his strong lyrical voice, his natural stage presence, and — in Barber — his talent of easily assuming different voices as he appears in disguise to get around Bartolo. As a tipsy officer or the irritating, nasal "Pace! Joia!" repeater, Rodriguez was "on" at all times, and in the right way.

To be "on" too much was an occasional problem with Brancoveanu, a talented, hardworking singer, who needs to try less and go with the flow more. I assume the stage director reined in Brancoveanu's stage performance somewhat, so that worked well, but Sloss might have been too kind to tell the baritone to turn off the amplifier in his throat. He sang well, but too often loudly, and the resulting roughness marred the quality of a perfectly good voice. The day that Brancoveanu dares to sing quietly will be the day of his realizing his full potential. 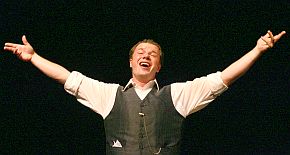 The rest of the cast was delightful: Elspeth Franks' Berta (who produced sneezes that rocked the building), Nikolaus Schiffmann's solid Fiorello and police officer, Eric Wenburg's hilariously deadpan Ambrogio and his broom — all these good singer-actors followed Field's imaginative direction, to handsome effect.

My hope is that Fremont Opera will give us more than one opera a year. Now that they have a letterhead, maybe fund-raising will pick up. 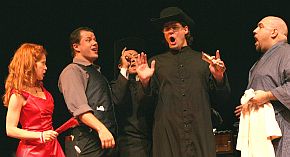 Everybody but the audience wanted Basilio (Eichelberger) to leave, already