It's not all that easy to maintain an artistic partnership if your primary job is "star." Violinist Christian Tetzlaff, stopping in at Herbst Theatre last Tuesday night under the auspices of San Francisco Performances, had just come from a grueling run of performances of the violin concertos of Beethoven (in Philadelphia, Jan. 8-11), Brahms (Rome, Jan. 17-20), and Berg (Madrid, Jan. 23-25).

Pianist Leif Ove Andsnes, meanwhile, was racking up Rachmaninov Thirds in the eastern part of the country — an occupation he returns to as soon as this short duo tour is over. But this violinist and pianist have been working together for at least 15 years; they played together here, also at Herbst, in 1994, in what was a San Francisco Performances debut for both players. I am glad that they find it possible to snatch even these brief collaborations out of their respective schedules, because seldom have I enjoyed a violin/piano recital so much. 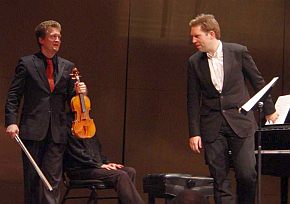 It was both bold and brilliant of the duo to put the least familiar piece first. Janácek's single violin sonata (which featured in that 1994 recital, as well) isn't so rare a piece on disc, but I've only once before heard a live performance. Like all his late instrumental music, it's strange, abrupt, almost inconsequent — and wholly unlike anything else. There are fierce explosions, grotesque gestures; then there are long, serene lines whose calm seems not quite real.

In the hands of these two — Tetzlaff quick, stealthy, brutal, shrill, chastened; Andsnes plaintive and poetic — it was uncanny music. If the Janácek cast the other piece on the first half, Brahms' D-Minor Sonata, into shade, it wasn't the fault of the performance. Tetzlaff's rather nervy vibrato irritated me in a couple of places, but he seemed to understand, and react sympathetically to, everything in the piece. That's not actually all that common in a sonata where the "tasty bits" — the warm slow movement, the ferocious finale — come bundled with a tiny, skittish Scherzo and a strange, brooding first movement that manages never, from beginning to end, actually to rest in its supposed key.

Tetzlaff took the many characters in stride. The finale snarled, the slow movement glowed, the first glowered. The Scherzo was maybe best of all, with its curiously dragged bow strokes set against that impossibly agile piano part. Andsnes, for his part, was sufficiently incredible that for once in this music it was hard to concentrate on the violin playing. The depth and sonority, the careful attention to inner voices and to the weighting of beats in Brahms' trickier rhythms, the lightness of the quietest and most fleeting music — all were extraordinary, all captivating.

Power With DelicacyAndsnes' touch is like nothing I've ever heard. At the return of the theme in the slow movement, the left-hand triplets were at once staccato and resonant like pizzicato cellos, but the rest of the piano part legato. In the Scherzo, all those phantom arpeggios were clear, even, yet whisper-soft.

And in the last movement, even in the most furious passages, the tone was deep rather than loud. Seldom have I heard a pianist make so much sound without seeming to beat it out of the instrument. A pianist capable of the range of timbres Andsnes used in the Brahms might have been tempted to finicky, over-detailed playing of Mozart. Actually, Andsnes was delightfully forthright and clear in the F-Major Sonata, K. 377, that opened the short second half. He and Tetzlaff were a true duo here, the violinist accompanying much of the time but taking the lead unhesitatingly when it fell his way, and the two bending phrases together in splendid synchrony.

The piece is underplayed relative to some of the other later Mozart sonatas, maybe because it ends with a slowish Menuet. But it's a honey, with a brisk, triplet-filled first movement and a long, elaborate variation movement at its center. (And it's hard not to think that Schubert must have known it well; the slow movement of his Fifth Symphony all but steals Mozart's last-movement theme.) Schubert's B-Minor Rondo brillant (D. 895) represents a side of the composer you don't run across too often in his chamber music.

It's not just that the music is uncommonly nasty for the violinist; it's that the difficulties multiply and mount as the piece goes on, while the wished-for goal of the final cadence recedes ever further into the haze. The music veers from key to key like a vacationer hell-bent on visiting all the lower 48 states in a week's road trip. If you can keep your place in the mad rush through the keys, you end up both awed and exasperated at the way Schubert keeps toying with you. You know that the piece is in B; an episode in (say) G major veers suddenly to B and you think "Home at last" — only it's back to G again, then back to B, then back to G, then to G minor, and off again in a completely different direction. The misdirective feints make up nearly half the piece.

Tease of a CadenzaI once saw a pianist who improvised his own cadenzas tease a conductor like this, trilling as though he was done with the cadenza only to go on to improvise more, two or three times. That was hilarious, but cruel. This was the same thing, only the joke was on all of us, for following the whole wild ride, especially when we knew where it would end up. When the piece did actually decide to come home, in a blaze of wicked B-major passagework, no one could doubt it.

Andsnes was imperturbably brilliant and articulate, making everything in the bounding piano part audible without anything sounding dry. Tetzlaff, insouciant in the Rondo's main theme and deft in its wild wanderings, occasionally sounded as though he was breaking a sweat, but that last peroration was as dramatic and virtuosic as anyone could want.

The encores were unexpected but terrific: two Danses champêtres from Sibelius' late Op. 106. The pieces are the damndest things — behaving like ordinary salon pieces (very good ones, you understand, tuneful and fetching) and then, every so often, wafting your way a whiff of this or that Sibelius symphony so slight that you couldn't be sure you hadn't imagined it. It's in there, though — a turn from the Sixth here, a little figure from the Second there, all tucked into a couple of neat dance tunes that would ornament any good violinist's recital. Why don't we hear them more often?