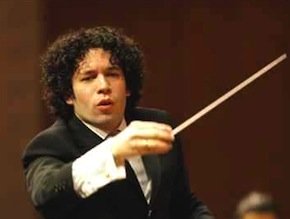 Bay Area audiences don’t have to leave town to hear the great American orchestras this season, since many of those orchestras will be coming to us, as part of the San Francisco Symphony’s new American Orchestra series. Between now and June, the Symphony will host appearances by the Boston, Chicago, Cleveland, New York Philharmonic, and Philadelphia orchestras. The Los Angeles Philharmonic under Music Director Gustavo Dudamel got here first, launching the series Sunday night in Davies Symphony Hall with an electrifying — and occasionally electric — program of works by Sergei Prokofiev, Enrico Chapela, and John Adams.

By now, Dudamel has thoroughly endeared himself to San Francisco. The Venezuelan conductor made an unforgettable first appearance at Davies Hall with the Simon Bolivar Symphony Orchestra in 2007, and has made several impressive returns since then, most recently with the L.A. Philharmonic in 2010. Now in his third season as music director in Los Angeles, he has made his vibrant approach to music-making into a powerful attraction: Sunday’s performance, the first of a two-night stand, filled every seat in the hall.

Dudamel, as it turns out, is also a smart programmer. In addition to Prokofiev’s Symphony No. 5 in B-flat Major and Adams’ Short Ride in a Fast Machine, the program included the first San Francisco performance of Chapela’s Magnetar, a new concerto for electric cello and orchestra. Dudamel and the orchestra, with Johannes Moser as soloist, had premiered the work in Los Angeles just three days earlier; with Moser joining the ensemble at Davies, the work emerged as an audacious addition to the contemporary repertoire.

Dudamel, as it turns out, is also a smart programmer.

Chapela named the work for a cosmic phenomenon (if you’re not an astrophysicist, you might not know that magnetars are neutron stars with the biggest magnetic fields in the universe), and in composing it he aimed for an aptly outsized sound world. For the most part, he has succeeded. The 25-minute score follows the traditional three-movement concerto form (the composer calls them “fast, slow, and brutal”), yet this is a piece for music lovers raised on the music of Jimi Hendrix, Frank Zappa, and Led Zeppelin.

The performance started, oddly enough, with members of the orchestra rubbing their hands together (something about cosmic noise produced by magnetars’ flares) as Moser, playing an amped and processed electric cello, moved his hands over the strings to make amorphous sounds.

Then he started bowing — short, agitated lines that were echoed throughout the orchestra. Heavy with effects, the cello sounded edgy, often like the shredding of an electric guitar, and at other times resembling a horn or a drone. The orchestra performed its own shape-shifting tricks: a wah-wah sound for the brass; a keening in the strings; a glistening, stringlike sound for woodwinds. The first movement’s cadenza offered respite — cool and tranquil, beautifully voiced by Moser — and the second movement introduced a vaguely oriental theme that morphed into a sinewy jazz dance. The finale reveled in bruising rock-band distortion leading to a Big Bang coda.

Magnetar may not be everyone’s idea of a concerto, yet it fuses its influences into something both heavyweight and alluring.

Dudamel conducted with singular intensity, and somehow it all cohered. Moser, who will solo in more conventional music (Shostakovich’s First Cello Concerto) at the Berkeley Symphony’s season opener on Oct. 27, played brilliantly throughout. Magnetar may not be everyone’s idea of a concerto, yet it fuses its influences into something both heavyweight and alluring.

Adams’ Short Ride in a Fast Machine also benefited from Dudamel’s high-octane podium style. The conductor immediately summoned a sense of fierce, barely controlled energy that never let up, to which the orchestra responded with bright, incandescent sound. This, incidentally, was the second time the score was heard in Davies this fall; Michael Tilson Thomas conducted it during the San Francisco Symphony’s opening night gala, and judging by the response at both performances, the next time won’t come soon enough.

If Prokofiev’s Fifth Symphony, performed after intermission, didn’t make the same kind of splash, Dudamel still used the occasion to display the orchestra’s fine points. The low strings, richly colored and exquisitely weighty, were his greatest asset, but the incisive violins, chirping woodwinds, and assertive brass all registered with distinction. Nevertheless, the performance occasionally seemed lacking in definition — until the finale. Here, Dudamel galvanized the ensemble, delivering sound that was forceful and, yes, electrifying. The encore, the opening of the third movement from Prokofiev’s “Classical” Symphony, was lilting and delicate, though just as fine.