The glamour and accolades that go along with being royalty are apparently difficult to enjoy when your throne is being directly challenged. That is made enjoyably clear in Oakland Opera Theater's production of Duke Ellington's comic opera Queenie Pie (playing through May 25), in which Harlem's preeminent beauty queen faces formidable competition for her title, for her romantic interest, and, perhaps most important, for the patronage of her enticing assortment of beauty products.
Quite literally, Queenie Pie is a production within a production within a production. Ellington's unfinished opera was restored, adapted, and orchestrated by a capable team for the Oakland Opera Theater and staged as a presentation by a fictional television network — reflecting the fact that the work was originally commissioned as an hour-long TV program with Ellington as the narrator. 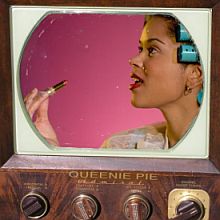 All photos by Ralph Granich

On opening night, the audience was transported to the glorious musical world of classic Ellingtonia, carried out exceptionally well by the Marcus Shelby Jazz Orchestra; to the absurdity of 1950-ish commercial television, complete with nostalgic kitsch and cliches; and to the colorful, exuberant streets and beauty salons of midcentury Harlem.

Although the task of compositional restoration is rife with contentious decisions (the most troublesome being whether the extant Ellington music and libretto should be taken as gospel or as a framework for interpretation), the Oakland Opera Theater successfully represents Ellington the composer and his opera as a playful but poignant mix of all things sophisticated and simple, modest and elegant.
Company Testing Its Wings
The Oakland Opera has been described as a "semifledgling" company, and its productions as "resourceful" and "ambitious" — descriptors that, while apt, fall short of conveying the dynamic joint effort of a commendable production team, a spirited cast, and a jazz orchestra that does not take its swing for granted. The freshness of Queenie Pie is promoted in many ways by the compay's still-being-converted performance space. To walk through the front door of the Oakland Metro Operahouse is to enter a quadrangle of skeletal wall frames ornamented by piles of unused bricks and silenced construction equipment.

That work is progressing is evident onstage as well. Large ensemble numbers that fall all too easily into theatrical caricatures divide memorable and inspired solo performances by Kathleen Antonia as "Café Olay," Noah Griffin as "Lil' Daddy," and, as "Queenie Pie" herself, Amanda King, whose enchanting, mellifluous voice quickly dispels any doubt of the queen's nobility. 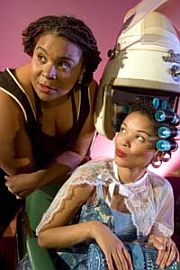 Ellington's "opera comique," as he described it, is one of the countless works that offers a keen insight into the multifarious mind and personality of the composer, albeit a subtle one. Queenie Pie's competitor, Café Olay, is a sultry Creole from New Orleans whose implicit exoticism is suggested in no small way by her mixed racial heritage and by the intoxicating "Creole Love Call" (one of Ellington's earlier compositions) that Mlle. Olay sings to woo Queenie's lover.

Likewise, during Queenie's voyage to a distant island in search of the mystical "nucli" — the missing ingredient necessary for the commercial success rightfully due her — her recognizable Harlem entourage appears transformed as a group of spear-wielding jungle natives. These "natives" are not unlike those for whom Ellington himself wrote music in the 1930s, when shows at the "black and tan" clubs, as they were called (nightclubs with black performers and exclusively white patronage), featured stereotype-saturated "jungle" numbers carried out by the most talented, dignified, and sophisticated performers in show business ... costumed in grass skirts and smeared with white war paint.
Soul Search (Plus a Good Hair-Relaxer)
In Queenie Pie, the transformed Harlemites are as superficial and unconvincing in grass skirts as they are when they seek the latest hair-straightening solution from Queenie Pie's salon. This appears to be a deliberate calculation by the composer to explore the full measure of an individual's worth, exemplified by Queenie's believable search for her inner self and true purpose in life. Not only was Amanda King wonderful in understanding this much, she also brought dignity to a character that can easily be misconstrued as being as vapid and confectionary as the 15-second TV jingles that advertise her beauty products. 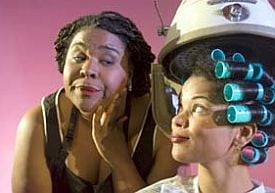 The backbone of the production is the Marcus Shelby Jazz Orchestra, a collection of fine musicians and excellent instrumental soloists. Pianist Dan Zemelman blends the numbers together gracefully with his tasteful accompaniment and familiarity with Ellington's material; he understands his role as both ensemble pianist and operatic continuo. Musical Director Deirdre McClure is steadfast in guiding the activity onstage and in the pit, and her assiduousness alone is deserving of a standing ovation.

The orchestra, in collaboration with the cast, fittingly makes Ellington's music the centerpiece of the show. The first few bars of the overture only whet the appetite for one enjoyable musical experience after the next, including the original tune "Another Uncharted Island" by arranger Marc Bolin.

Queenie Pie is a rediscovered, restored, and reconceptualized endeavor by a young opera company that shows quite as much promise as Duke Ellington's long-forgotten opera. The Oakland Opera Theater is as important an artistic institution as it is a cultural one, just like Ellington and his music. Those who choose to attend this particular production will find themselves enriched by both.