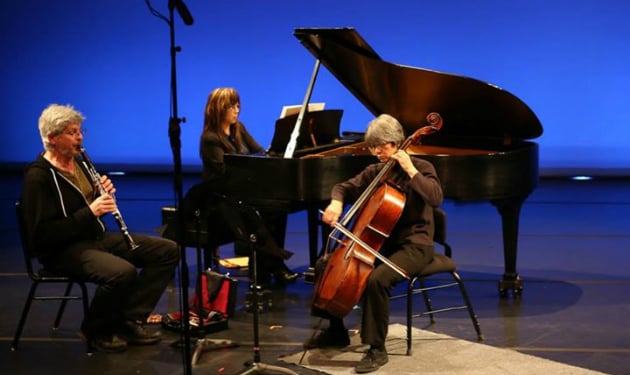 In Plink!, composer Guillermo Galindo winds four music boxes — sitting, with dignity, on chairs facing the audience — as Brenda Tom plays in the high register of the piano. The ensuing overlapping of tunes distorts any distinction between the instruments, until the music boxes slow, and the pianist runs out of music. The tune emerges — it’s “Happy Birthday,” in honor of Earplay’s 30th anniversary season.

The most exciting premiere was of Carla Lucero’s El Castillo Interior: The Interior Castle (2015), for male soprano, bass clarinet, and prepared piano. The title refers to St. Teresa of Ávila’s 16th-century work, which describes the soul journeying through a series of seven mansions, culminating in a spiritual marriage with God.

But Lucero’s work is delightfully mundane. She sends her traveler not through the psyche, but rather, on a sightseeing trip around the United States. In seven brief and well-characterized movements, Lucero’s traveler visits San Francisco, Hollywood, and Wall Street, among other places.

Male soprano and guest artist Randall Wong was a charismatic traveler. His diction was excellent; although the dark house lights prevented the audience from reading the text provided in the program notes and fully appreciating the work’s irony. Pianist Tom was appropriately elegant and quirky; clarinetist Josheff played each flourish with style.

Other works were less compelling. Even Baune — a competent and sensitive violinist — couldn’t resuscitate Wayne Peterson’s unremarkable Brief Encounters (2014). In contrast, Lou Harrison’s Threnody for Carlos Chávez (1978) is a melodic masterpiece, but the performance fell flat.

Indeed, each half of the concert concluded with a weak work. Hyo-shin Na’s Ocean/Shore 2 (2003) achieves some novel timbres, but the central pizzicato motif repeats longer than is interesting. In the middle of the piece, the inclusion of narration — skillfully performed by cellist Moore — initially feels jarring, yet the piece would in fact benefit from a more continuous story. As it is, the instrumental texture sounds like the background track to an event that’s gone missing.

So it was with Nicolas Tzortzis’s Emak-Bakia (2015). The piece is a soundtrack to the 1926 Man Ray film of the same name; on May 31, Earplay will perform at the S.F. Silent Film Festival. But Monday’s concert presented the piece sans film, and the overall effect was underwhelming. In true surrealist style, the narrator (Bennett) continually strolls across the stage, carrying a stool, chair, and memorably, a pineapple wearing a tie. Unfortunately, he was for the most part inaudible, due to his stance — in profile — and a malfunctioning microphone. Guest artists Leighton Fong (cello), Matt Ingalls (clarinet), and Stacey Pelinka (flute) rounded out the tight instrumental ensemble, which Chun conducted.

Due to inefficient set changes, the evening dragged. But the high level of musicianship demonstrated by the Earplayers — particularly Tom, Brody, and Josheff — made the concert well worth attending.

Earplay is smart to prioritize diverse programming, which draws large crowds and ensures a certain level of audience satisfaction: Everyone can come away having enjoyed at least one of the works. Indeed, the ensemble has attracted a loyal following that has already surpassed the fundraising goal for next season. At this rate, Earplay will continue to bring entertaining performances to the Bay Area for years to come.