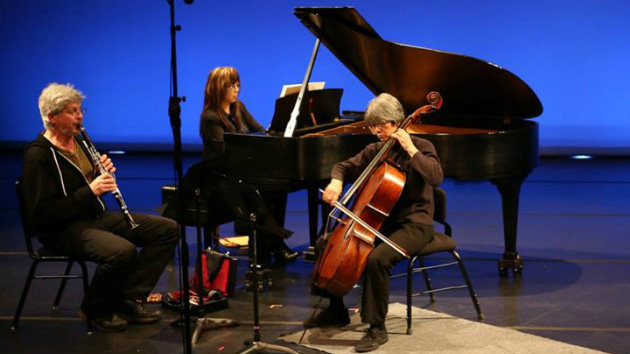 Even considering the richness of the musical landscape in the Bay Area, the number of organizations that not only strive to present new and challenging repertoire, but flat-out thrive doing so, boggles the mind. Monday evening’s program at ODC Theater by new chamber music dynamo Earplay proved the case. The group is celebrating its 30th season with a series of concerts packed with premieres and focusing on composers who call or have called the Bay Area home.

Conductor and artistic director Mary Chun provided the audience with details on the duration of each selection. It may seem like a trivial detail, but keeping the audience from having to guess “Is it over yet?” can really aid in the enjoyment of unfamiliar repertoire. First on the program was Terry Riley’s String Trio — a piece from 1961 submitted as part of the composer’s graduate thesis at UC Berkeley — performed by the highly attuned trio of Terrie Baune (violin), Ellen Ruth Rose (viola), and guest cellist Dan Reiter.

Rose returned to the stage accompanied by cellist Thalia Moore to perform Ross Bauer’s Pas de Deux. Composed in 2009 and reworked (and shortened) for the occasion, the piece unfolded much like the titular dance, requiring choreographic precision from the performers. The piece showcases three contrasting ideas, which vie for attention and precious stage time during the 5-minute duration. Clear rhythms and strong gestural writing made for an expressive and entertaining presentation.

Christopher Wendell Jones’s Archaeology (commissioned by Earplay and also receiving its premiere) provided the most striking textural and timbral contrast in the first portion of the program. A rumination on the inescapable nature of musical history (and musical memory), Jones’s piece created an interwoven and unique sound-world, with beautifully blended long tones of viola and clarinet, sinister piano resonances, and a subtle layering of dynamic levels. Many extended techniques were called upon during the composition, but they never felt contrived; Jones arranged the wide variety of timbres, attacks, and colors with a delicate precision that yielded mesmerizing, hypnotic results — such as in the final gestures of guest pianist Karen Rosenak, nearly climbing inside the piano to mute the lower register while sliding a metal pipe on the unwound strings, accompanied by quiet, bell-like multiphonics provided by clarinetist Peter Josheff.

The second half opened with a violin solo by Baune, giving a commanding reading of Richard Festinger’s Double Take (which according to the program notes was presented as a gift for Earplay’s anniversary season).

Festinger drew his idiomatic inspiration from the towering model of J.S. Bach’s sonatas and partitas for unaccompanied violin. He harnessed the old idea of implied polyphony (a musical device that creates the illusion of simultaneous musical ideas through registral shifts) and gave it an altogether modern twist, effectively interweaving the two implied lines into a single expressive weave. An extended section in double stops expanded the textural palette before the piece reached a fragile and touching ending.

The celebratory mood continued through the presentation of the Earplay Donald Aird Composers Competition prize to 2014 recipient Daniel Tacke, whose beautifully quiet im Rückblick (“in retrospect”) for mixed quartet of violin, viola, cello (Reiter), and clarinet was yet another standout. Interrupted gestures gave way to motionless lines, rendered without a trace of vibrato; unexpected paired melodies provided an air of mystery and wonder to the magical, crystal-like soundscape. Sounds arose from nowhere — the clarinet writing was especially daring, leading me to double-check where those faint drones were coming from on a couple of occasions. The piece’s spellbinding power was only confirmed by a remarkably quiet audience.

To round out the program, Chun returned to the stage to conduct the largest ensemble of the evening — flute (Tod Brody), clarinet, violin, cello (Moore), and piano (Brenda Tom) — for Chen Yi’s Happy Rain on a Spring Night (2004). Inspired by a 1,300-year-old poem, the piece featured a clearly articulated structure. The relationships between sections felt harmonious despite the clear textural, timbral, and character breaks that demarcate them. The second section was particularly striking, with the flute providing breathy tones much like from a shakuhachi (a Japanese bamboo flute), while the strings recited a simpler pentatonic melody. A brisker toccata drove the piece to its conclusion, steadfast rhythms culminating in an appropriately literal “bang!”