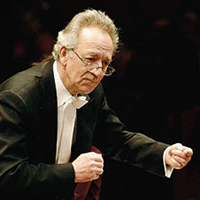 No American music director in a right mind would program a 30-minute work written in 2000 as the second half of a concert. A third of the patrons would leave after intermission. But that’s just what Artistic Director Yuri Temirkanov and his Saint Petersburg Philharmonic did Sunday evening at Davies Symphony Hall as part of the Great Performers Series. Those who stayed to hear Giya Kancheli’s … al Niente — and that was most everyone, perhaps because there were many Russians in the audience — were treated to an experience 10 times more unpredictable than the simultaneous Academy Awards broadcast suffered by TV viewers elsewhere. To boot, patrons heard terrific renditions of excerpts from Rimsky-Korsakov’s The Legend of the Invisible City of Kitezh and Tchaikovsky’s Piano Concerto No. 1, blazed forth by Denis Kozhukhin.

Kancheli, born in Tbilisi, Georgia in 1935, is rarely played by U.S. orchestras, though he has a popular following via many CD recordings. The San Francisco Symphony commissioned an oratorio from him, Don’t Grieve in 2002, but it wasn’t treated nicely in the press (I did not hear it). The first American performance of … al Niente was in 2003 when Temirkanov, its dedicatee, conducted the Baltimore Symphony.

Kancheli has a distinctive style which may be offputting to some but riveting to others. It is characterized by long stretches of pianissimos, punctuated by silences and fits and starts of melodic, rhythmic, and/or timbral riffs. Out of the blue, or preceded by quick crescendos, fortissimo explosions knock you out of your chair. The orchestration is masterful; the language is tonal, with teasing functional harmonic series that generate expectations that aren’t always satisfied.

To it, I fit a story of a noir detective, breaking and entering a criminal hideout, searching for evidence of the murder of his girl, whom he fondly remembers in flashbacks. Suddenly, a thug sneaks up from behind and attacks. Utterly absorbing, you wonder what’s going to happen next ... Yet things become increasing familiar ... You’ve been through it all before ... It’s your life ... How will it end?

The title ... al Niente refers to a musical instruction of extending a decrescendo “to nothing.” Total silence. Or, as Kancheli has noted, “the process of gradual departure from this life.” Kancheli’s Big Sleep does not go easy, with six major crescendos, numerous drum and tambourine pops, and repeated piano staccatos that bring to mind flatlines. 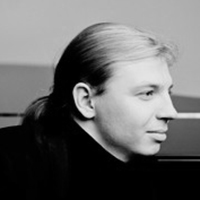 The silences became revelatory in their exposure of unrest in the minority of audience members whose squirmings on upholstery become manifest, but the majority supported more than five minutes of curtain calls leading to two encores. The first, amazingly, sounded like yet another hit Tchaikovsky melody, but was in actuality British — Edward Elgar’s Salut d’Amour. The second was the hilarious Vivo from Stravinsky’s Pulcinella.

Rimsky-Korsakov’s 12 minutes of opera excerpts were a refreshing change from his usually heard works, and idiomatically performed. The war horse Tchaikovsky pulled out all stops in the Lisztian manner adopted by the pony-tailed Kozhukhin. Infallible technique and breathtaking octave runs impressed along with sensitive rhythmic élan. Some of the melodic lines were a bit overpunctuated, however, and need not have been quite so domineering. The performance was cheered repeatedly by patrons, resulting in an encore of the Bach-Siloti Prelude in B Minor.

Temirkanov’s conducting was well paced and expressive. I particularly liked one of his gestures, which was like a losing poker player sweeping all of the cards off the table. It took no detective to discover that most of the St. Petersburg’s symphonic cards are aces.