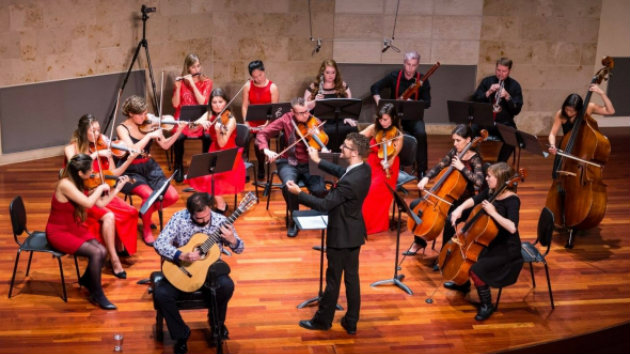 For most people, the harpsichord brings Baroque music to mind. Elevate Ensemble, however, challenged the notion of the harpsichord as an antiquated instrument during a program at SOMArts Cultural Center on Feb. 27. Under the direction of Chad Goodman, harpsichordist Derek Tam and the members of Elevate performed three pieces for harpsichord, all of them finished in 2016. The performers and composers ignited their intimate performance space while shattering stereotypes about how a harpsichord should sound.

In the first half, two works for string quartet and harpsichord were premiered. Despite their similar instrumentation, they could not have been more different from one another. The first piece, The Color Festivals by Nicolas Lell Benavides, is a six-movement work based on fairy tales the composer’s parents had read to him as a child: Abbie Phillips Walker's Told by the Sandman.

Inspired by Ravel’s Mother Goose Suite, Benavides aimed to create whimsical music, which would nonetheless appeal to adults. While the piece does adopt techniques, including thick embellishments, that conjure Baroque music, the harmonies and resultant musical portraits sound diverse and modern. My favorite was the fourth — an unmeasured, quasi-improvisatory prelude motivated by a tale about a sad guard dog.

Benjamin Sabey’s experimental Fera Machina investigated a key role of the harpsichord in Baroque music, which was to provide “moto perpetuo,” or unrelenting rhythmic drive generated from repeated subdivisions of the beat. Sabey’s title conveys taking this historical role to extremes, resulting in a machine running wild. More broadly, [Fera Machina] explores timbres and textures that become possible when notions of what a harpsichord should sound like are suspended.

More broadly, his piece explores timbres and textures that become possible when notions of what a harpsichord should sound like are suspended. The suspension is possible in part because the harpsichord combines with kaleidoscopic textures and tumbling gestures from the strings in ways that seem unpredictable yet organic. While the title might suggest music running out of control, Fera Machina actually strikes me as a thoughtful, almost ruminative, piece.

One of the oldest bass line/chord progressions we have from European music, la folia, became famous as a basis for variation pieces and improvisation in the 15th and 16th centuries. Opening the concert’s second half, Danny Clay’s la folia carried this tradition into the 21st Century. The beginning section tinkered with aggressive embellishments on otherwise sustained pitches. A smoother middle section followed, and then the piece culminated in a more jubilant iteration of la folia based on pulsing subdivisions. Clay’s experiments with this old idea result in glorious, sometimes solemn music. Having performed this piece before, Elevate played it well, without a conductor.

Closing the program was Manuel de Falla’s 1926 Concerto for Harpsichord and five instruments (flute, oboe, clarinet, violin, and cello).  The austere work pays homage to Spain and to the Catholic Church. The piece is also regarded, by some interpreters, as a musical autobiography of the composer. The first movement’s main theme is based on a Castillian folk tune, and the second sounds like a funeral dirge. In the finale, Tam demonstrated that the instrument, despite lacking a wide dynamic range can create concert-closing excitement.

Elevate Ensemble is still relatively new, but they are accomplished musicians and Goodman has ambitious programming ideas. Tam is clearly a master of his instrument, and his enthusiasm for it is infectious. He and his collaborators proved that the harpsichord is hardly outmoded — on the contrary, when past and present creatively mingle the possibilities are endless.