Not all Russians are alike. Modest Mussorgsky wrote big, earthshaking operas. Anton Chekhov created gloriously subtle, understated plays.
Attributed to Mussorgsky, the version of Boris Godunov that San Francisco Opera presents in its new production of the work ends suddenly, quietly, Chekhovlike, sending the audience out into the street in a state of puzzlement, thinking: "Is it really over? What was that?!"

There is no revolutionary chorus, no wall-shaking mob scene followed by the heartbreaking lament of the Fool — only Boris' son cowering on the throne, about to be killed by Prince Shuisky ... maybe. Curtain. And a feeling of Chekhovian ambivalence and sorrow. 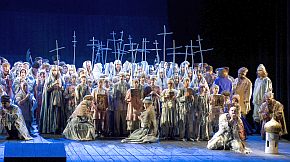 A scene from Act 1

It's possible to tweak the opera and make it work in various ways, but only in the right venue. In Moscow (or even the Budapest of my childhood), where you could see the "big Godunov" almost any night, fine. Here, where for a majority of the audience this will be THE Godunov they see, it's nothing less than being shortchanged.

Despite all, it's amazing how well the San Francisco Opera Chorus — understaffed, misdirected from the pit and on-stage, deprived of some of its best music in this shorter version —came through Wednesday evening. They held up their end in the fragments of this truly grand opera, which is a Russian national treasure, a masterpiece, a huge work in every way, only some of which came through this time. 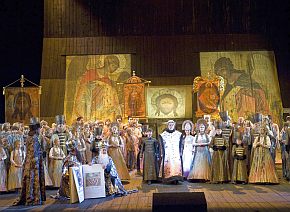 The sound from each section was solid, the balance excellent, the diction exemplary. How awful, then, to have the Chorus sound muffled in the Coronation Scene, when the singers could (and should) blow the walls down. Even worse for the Chorus (and the audience), they were deprived of the entire great crowd scene of the traditional finale. As for the Opera Orchestra, fresh from its exultation in Die tote Stadt, it sounded fitful, alternating between fine quiet passages and lax playing elsewhere. 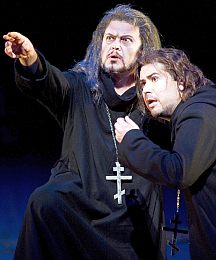 Vitalij Kowaljow (Pimen) and Vsevolod Grivnov (Grigory), in an abbreviated role, this time

There are many versions of Godunov, and even more learned essays written about it, but this production only attenuated its magnitude and power. In this San Francisco mounting (which was borrowed from Geneva and follows the 1869 "initial" version, rather than the 1872 "definitive" one), the joyful "Polish Act" is missing, with nothing else to lighten the gloom. And, most disappointingly, the three-hour performance ends quietly, suddenly, with three forlorn figures in a tragic denouement, instead of the "Triumphal March" entry of Dmitri, the Pretender.

Besides leaving the audience at sea, those two omissions also deny our hearing more of Vsevolod Grivnov's sensational Dmitri. Here's a Russian tenor (both in fact and in Fach) who could equally well sing Puccini, Verdi, or even the telephone book. 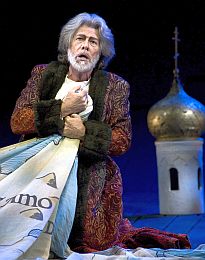 In the title role, the great veteran Samuel Ramey sang increasingly well as the evening progressed. His voice is on the dry side, with an overlarge vibrato that seemed immaterial against the artistry of his interpretation. A wondrous bass performance came from Vitalij Kowaljow, as Pimen; his warm, beautiful voice floated effortlessly throughout the house. Vladimir Ognovenko's Varlaam was fine, but the voice sounded more rough than I remembered from the past. 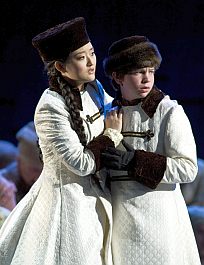 Three present Adler Fellows and a former one contributed mightily. Ji Young Yang's Xenia was bright and charming, with a voice that lights up the stage (which, paradoxically, was kept way too dark most of the time on Göran Wassberg's "economical" unit set). Andrew Bidlack's Fool was a vocal and dramatic coup. Daveda Karanas' Nurse and Catherine Cook's Innkeeper were excellent. Seventh-grader Jack Gorlin was a prince of a Tsar's son, singing bravely and well. 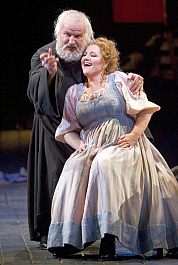 Julia Pevzner, making her local debut, directed the production by moving the large cast smoothly, but not allowing the Chorus many chances to sing directly to the audience. It might have been better to allow a few collisions but generate more fire and excitement ... and to present finales at the end of both acts that felt more like completion than something petering out.