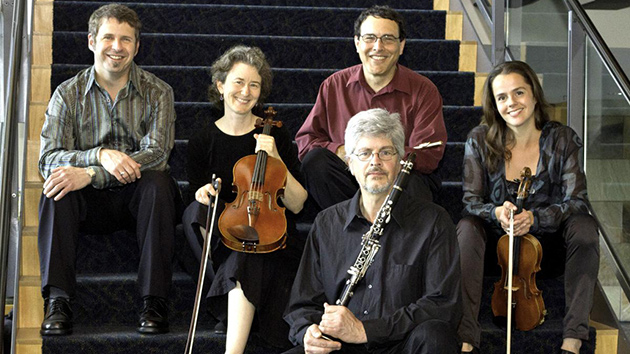 The tricky relationship between music and words was the going concern at UC Davis Music Department’s “Music and Words” Festival, which ran January 27 through Jan. 31. To that end, the university offered eight concerts, including appearances by So Percussion and the UC Davis Symphony Orchestra.

On Thursday evening, UC Davis’ own new music group, Empyrean Ensemble, was featured in the festival, performing a bracing evening of works by four living composers. Only two of the five works involved words, however, and those two pieces could not have been more different.

The gem on the program was the concert’s closing number, the 20-minute, four-movement work Four Settings by New Jersey native and UC Davis composer-in-residence Melinda Wagner.

First off, though, was Wagner's four-movement Noggin, performed by UC Davis instructor Michael Seth Orland, which starts out with two short miniatures, the first slow and pensive, the second frothy and jazzy.

The two following movements were deeper examinations of sound and emotion. The latter movement, "Re-Uptake," proved a delectable example of how a composer dives deeper into a previously sounded musical idea.

Wagner deftly integrated the human voice with a chamber orchestra in Four Settings. The work was scored for soprano, violin, viola, double bass, clarinet, flute, and piano, and conducted by Matilda Hofman.

The most interesting movement was set to Desnos' "Last Poem," written by the poet when he was imprisoned at the Terezín concentration camp during World War II. Here, otherworldly sounds emanated from the orchestra and spare emotion was left wafting in the air.

Less effective was Tomás I. Gueglio Saccone's Knowledgeable Vuida. Written for actor, flute, clarinet, violin, cello, and percussion, Gueglio Saccone's piece blends text and music through an actor’s in-your-face reading from a 1967 book called The Social Construction of Reality. In particular, Gueglio Saccone excerpted a paragraph dealing with the perception and symbolism of death. That's heady territory, and proved hard to follow.

Actor and performance doctoral student Lisa Quoresimo delivered the tricky reading in staccato bursts. Sometime the stanzas slowed to normal conversation speed, charged with irony. Quoresimo did a powerhouse turn, never letting the density of the text get the better of her.

Gueglio Saccone offered plenty of contrasts and glissandos to make musical points. The musical ideas however, lost steam soon after the first stanza of a work that felt more like a comic-ironic commentary about academic writing.

The second gem of the evening was composer Dan VanHassel's fzzl, written for snare drum with transducer. Percussionist Megan Shieh was a dynamic presence in a work informed by African drumming. Van Hassel's score makes ample use of all sides of the snare drum.

Although rhythmically taut, the music expanded and loosened once the transducer began to emit sound. The sound production was accomplished within the snare drum, rather than outside it on an amplifier. The transducer allowed the drum line to replicate Shieh's drumming picked out on a contact microphone. The effect produced the faraway sound of a Formula One racecar one moment, the dying notes of an organ the next. Moments when Shieh stopped drumming and the transducer took over were the most interesting explorations of sound.