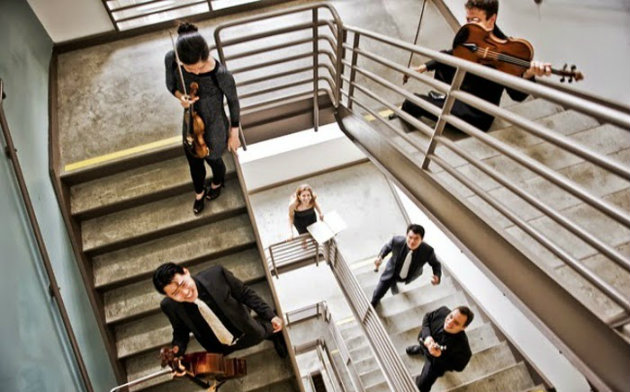 Ensemble San Francisco’s reputation as “hip, unstuffy, and malleable” seems well earned, to judge by its Jan. 9 concert. The musicians read program notes from their cell phones and, during intermission, audience members could send their questions to the group via text message.

Ensemble San Francisco (formed in 2013 by pianist Christine McLeavey Payne and clarinetist Roman Fukshansky) hosts chamber music parties through its Opus 415 club and has performed informal concerts across the Bay Area in a variety of community centers — including a juvenile detention center.

The group’s adventurous spirit extends to its programming, and Saturday’s concert at St. Mark’s Lutheran Church was no exception. In a program described as a mix of “glorious melodies” and “pure silliness,” it was Ottorino Respighi’s Il Tramonto for mezzo-soprano (Betany Coffland) and string quartet that, unexpectedly, made the strongest impact. The drama of the text (“The Sunset” by Percy Bysshe Shelley, about a woman who mourns the sudden death of her lover) necessitates flexible, operatic writing, and the resulting musical texture is highly complex. It’s a gorgeous work that should be performed more often. [Rebecca] Jackson’s sound, in particular, has a razor-like precision that few other players achieve, and [Jessica] Chang’s musicality stood out among the inner voices.

The string quartet (with violinist Rebecca Jackson, second violinist Emily Greitzer, violist Jessica Chang, and cellist Frédéric Rosselet) was a delight to hear. Jackson’s sound, in particular, has a razor-like precision that few other players achieve, and Chang’s musicality stood out among the inner voices.

In fact, it was the string players who imbued the performance with its direction. Although Coffland has a beautiful instrument, she delivered few of Respighi’s indicated contrasts; specifically, she could have afforded to sing much less than she did in the quieter sections. Projecting the subject’s grief, Coffland sang over the ensemble the way an Isolde has to fight to be heard over a Wagnerian orchestra, but Il Tramonto isn’t an arrangement of a large-scale drama — it’s a quintet, and a tightly scored one, at that.

Also rewarding was Camille Saint-Saëns’ Sonata for Bassoon and Piano, performed by pianist Payne and Rufus David Olivier. Written in 1921, the last year of the composer’s life, the sonata is no magnum opus; rather, it’s a light-hearted and brief pastorale. In the outer movements Olivier’s phrasing was sometimes overly simplistic — Saint-Saëns’s melodies can use help — but he brought a charming spontaneity to the quirky second movement, and his fluid technique grew more rhythmic as the performance continued. Payne was a model accompanist, phrasing the first movement’s florid arpeggios, which can easily become overpowering, with utmost care.

Less strong was Chopin’s “Romance,” from the Piano Concerto No. 1 in a modified arrangement by Richard Hofmann for piano quintet. The idea of translating an orchestral work to a small space is an attractive one, but despite Payne’s passionate phrasing, Saturday’s performance lacked force. Reduced to four string parts, Chopin’s already-thin orchestration becomes meager, especially when compared with the multilayered colors of the Respighi work.

Then again, the “Romance” is pretty in any form it takes, and if the group’s performance introduced Chopin’s melodies to any of the St. Mark’s audience members, so much the better.

Unfortunately, even Ensemble San Francisco couldn’t redeem the piano trio Café Music, which composer Paul Schoenfield describes as “a kind of high-class dinner music that might (just barely) find its way into a concert hall.” Light music can be done well, but Schoenfield mixes the styles of Broadway, gypsy jazz, and early 20th-century American music in the most humdrum of ways. Though the performance by Payne, violinist Jackson, and cellist Rosselet was both energetic and technically polished, the piece revealed itself as an utterly boring — and long — work.

As the season progresses Ensemble San Francisco will have plenty of opportunities to play the heavyweights of chamber music, starting with the Brahms Horn Trio on Jan. 12.