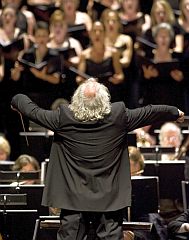 After 17 years as music director of the San Francisco Opera, Conductor Donald Runnicles was given a rousing farewell tribute Friday evening in the Opera House. The feature was an impressive performance of the Verdi Requiem by the Opera’s chorus and orchestra, with soprano Heidi Melton (replacing the previously announced Patricia Racette, who had taken ill), mezzo-soprano Stephanie Blythe, tenor Stefano Secco, and bass Andrea Silvestrelli.

Years ago, on an intermission feature of the Metropolitan Opera’s broadcasts, the panelists were asked to name what they considered the best Verdi opera. When one responded, “his Requiem,” that became an instant and oft-repeated classic. Hearing Runnicles’ very operatic interpretation of the work certainly brought home the justice behind that cliche.

Never mind religious decorum, this was all dramatic emotionality, from start to finish. Dynamics were often extreme. The opening came at barely a whisper from both orchestra and chorus. I had to concentrate to be certain that they’d actually begun. How Runnicles managed to achieve near-silence, then, is anyone’s guess. Admittedly, these are all seasoned musicians — seasoned in both senses. Still, the effect of desolation was gripping.

When all hell broke loose for the Dies Irae, the effect was volcanic. Runnicles seemed to encourage total wildness, in a musical way of course. In fact, this depiction of the Last Judgment should be played for terror, and boy, was it ever.

Unfortunately, Runnicles let the orchestra overpower his vocalists in a few spots. That’s highly unorthodox, yet very much to the point when the prediction is that our world will be in ashes as human souls quiver before the prospect of their judge. It showed our conductor’s willingness to rethink dramatic needs. This was a Requiem performance along the dramatic lines of Verdi’s Otello. Bravo! — a gold star for that conception.

Most of the soloists sang out at full throb during their important solos, duets, trio, and the like. By contrast, bits of incredible tenderness were heard in the more-contemplative segments.

An Evening of Fine Moments 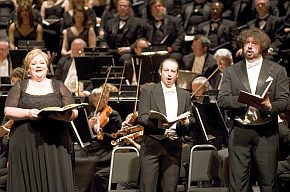 Mezzo Blythe proved especially effective in this respect during the “Liber scriptus” (A written book) and the “Recordare, Jesu pie” (Recall, merciful Jesus), with the latter receiving an equally lovely sound from soprano Melton during their duet. Melton’s opening of the “Libera me, Domine, et morte aeterna” (Liberate me, O Lord, from eternal death) took full measure of the music’s devotional character — producing one of the evening’s many great moments.

Blythe, however, was the only one of the soloists to open with a fresh, sweet timbre. The first solo entrances in the Kyrie Eleison (Lord, have mercy on us) sounded a bit dry-throated. As the piece progressed, three of the soloists recovered with refined vocalism, Blythe almost immediately. (I noticed she had some bottled water on stage for a bit of sipping.)

Tenor Secco took a tad longer to recover but then made some memorable contributions, especially during his solo “Ingemisco tanquam reus” (I groan as a guilty one), in addition to excellent and balanced contributions in his ensemble singing, as did the two outstanding women soloists.

The one letdown, for me, was bass Silvestrelli, whose voice was coarse in timbre and who too often suffered minor intonation slips. Perhaps he was not in perfect health, for the list of his accomplishments in the world’s major houses would strongly imply that he’s capable of great performances. (Let’s face it, the local pollen count in our air has had most everyone sniffling, not the least me.)

Superb Choral SingingThe chorus was just plain terrific throughout, flawlessly balanced whether the music be ultrasoft or be at the other extreme of dynamics. Verdi’s great, double fugue, the “Sanctus, Sanctus, Sanctus” (Holy, holy, holy) came forth 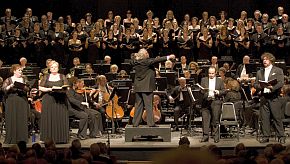 perfectly, each of the eight independent vocal lines sounding clean and thrillingly audibly.

It’s not something much discussed in program notes, but one key to Verdi’s constant rise from greatness to super-greatness was that he never gave up doing compositional studies. Whenever he had a day free, especially in foreign cities, he would amuse himself by doing contrapuntal exercises.

In fact, he never originally intended to publish his String Quartet, which he composed out of his exercises in form and textural balance when he had spare time, merely to keep his mind sharp. Hence, his contrapuntal skill when confronting a fugue for double chorus.

At the end of Friday’s performance, after ovations had subsided, short speeches of appreciation were given on stage by luminaries honoring Runnicles’ great service to both the S.F. Opera and the city. They were followed by his being awarded the San Francisco Opera Medal, which fired up even more ovations. Clearly, the award was made by unanimous consent.