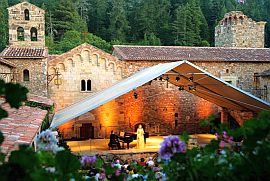 The Festival del Sole concert Thursday in Napa’s Castello di Amorosa was an exception to the conventional structure of a concert. It consisted of two unrelated sections, each featuring a big star, and felt like two separate musical events. The two featured performers could not have been more different, not that there is anything wrong with that, but the concert was indeed unusual.

The Program began with Mussorgsky’s 1874 Pictures at an Exhibition, performed by one of the world’s finest — and most self-effacing — pianists, Leif Ove Andsnes. Part II featured the glamorous diva Renée Fleming in a set of German lieder, Verdi opera arias, a couple of American songs, and Broadway hit numbers.

Interesting, the word set. It has some two dozen meanings, and while in the paragraph above it’s used in the sense of a group of songs, Fleming also seems to be set in her ways. With the single exception of her opening lieder, a simply and affectingly performed "Ich soll ihn niemals" (I will never) from Korngold’s Die Kathrin, everything that followed was grand, “public,” calculated to within an inch of its life, measured, and — dare I say? — feigned. 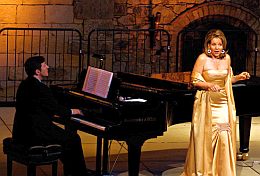 young soprano with the thrilling voice sang from the heart. Her appearance is still spectacular, the voice is not much worn by the years, but something has happened to the communication between the artist and the audience ... OK, some of the audience; the majority usually responds as if she were a rock star.

Outwardly, Fleming handles fame very well, but when it comes to music, appearances don’t matter. Just as Pavarotti’s Yes Giorgio phase was a huge letdown in the career of an otherwise great singer, when Fleming sings “Salce” and “Ave Maria” from Otello routinely, as she did on Thursday in the Castello’s courtyard, it’s disappointing. In "Mercè, dilette amiche" (Thanks, young friends) from I vespri siciliani, there was an unpleasant bounce in the voice (exaggerating the aria’s siciliana/bolero beat), and a coarse high note — something rare from Fleming. Even worse, her delivery of Richard Strauss’ "Morgen" (Morning) and "Zueignung" (Dedication) lacked the emotional power inherent in the music, but realized in performance only when the songs are allowed to speak for themselves, and are not “pushed” or presented too grandly.

(In the “Zueignung” YouTube sample above, Jessye Norman is not a paragon of subtlety, though she conveys the depth of feeling, and her “Habe dank” diminuendo repetitions before the final explosion accomplish what Fleming didn’t. As to Janet Baker’s subtle “Morgen,” it’s an interpretation second to none, including my personal favorite, Elisabeth Schwarzkopf's.)

“Grand” worked better for Fleming with “Summertime” from Porgy and Bess and “I Could Have Danced All Night” from My Fair Lady, though both songs make much more sense sung with quiet rapture, not an over-the-top sensibility. The Water Is Wide and Shenandoah brought to mind, nostalgically, Thomas Hampson’s spot-on treatment of the songs. 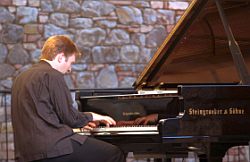 Through it all, Fleming’s accompanist, Gerald Martin Moore — stepping in for the indisposed Antonio Pappano — performed brilliantly. He showed precisely the kind of restraint and simplicity lacking in most of Fleming’s singing.

Artistic discipline and Andsnes are synonymous. The result: a color-splashed Pictures, Mussorgsky’s original piano tour of an exhibition, each movement different and “right.” In the more frequently heard Ravel orchestration of this work, there is a tendency to make it all sound similar; in Andsnes’ performance, “The Old Castle” was on the other side of the moon from where the “Unhatched Chicks” reside. “The Marketplace at Limoges” was French, the “Catacombs” Roman; with only a few seconds separating “Baba-Yaga” from the “The Great Gate of Kiev,” they came from different worlds.

As is invariably true for Andsnes, there was only the music, no posing, no courting of the audience — and a glorious performance. His instrument — a $300,000 Steingraeber from Bayreuth, via Berkeley's R. Kassman Piano — fit the outdoor occasion well, sounding almost imperceptibly more metallic than a top-of-the-line Steinway. I am not sure if it was the piano or Andsnes, but in some of the "Promenade" repetitions, more warmth would have been welcome.

Meanwhile, del Sole's original home, the one in Cortona, Italy, will have some fascinating programs this summer, quite different from the mostly meat-and-potatoes fare in Napa. Just one concert in August, for example, will offer the music of Honegger, Roussel, Mendelssohn, and ... Anthony Hopkins. Yep, Hannibal Lecter himself. True, in Napa we had Robert Redford, though in that evening he was only in the audience.