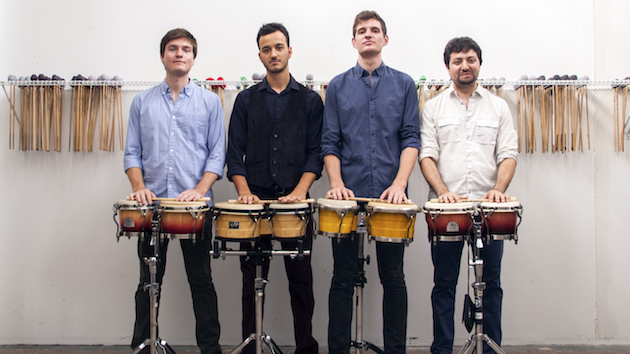 Can a percussion ensemble give you a newfound appreciation for your car keys?

And what about capturing the rapt attention of a not oft-seen demographic in new music circles: the preteen? Can the percussion ensemble do that too?

The answer is a resounding yes. It was self-evident in Saturday’s captivating Sandbox Percussion ensemble performance at the Festival of New American Music at Sacramento State University. 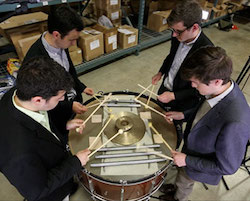 This fresh-faced quartet from Brooklyn is the latest iteration of a growing number of percussion ensembles. These four musicians kept the evening bright, breezy, and relevant. However, this was no lightweight, pop music affair. The concert had enough complexity to satisfy any classical music aesthete. The performance was so expertly delivered it is no stretch to say that Sandbox Percussion are the next percussion ensemble of note to follow in the steps of So Percussion and others.

Sandbox is composed of percussionists Jonny Allen, Victor Caccese, Ian Rosenbaum, and Terry Sweeney. These are talented and savvy performers, and they’re composers, too. On Saturday, the program gave a touching nod to two classics of the percussion ensemble repertoire, while fronting recently written works. Four of the nine pieces were West Coast premieres, written within the last two years.

The concert was bookended with works by Steve Reich. It began with his bracing Music for Pieces of Wood, from 1973, and ended with a powerful reading of Part 1 from the iconic Drumming. The Reich pieces were performed with brightness, soul, and precision, as befits the interpretation of a classic.

The second work, Chatter, written in 2014 by Caccese, saw two members of the ensemble at a drum set, another at a keyboard, and one at the vibraphone. The work evolves from the staccato striking of mallets to a clustery arrangement of high tones that grows ponderous. The piece evolves into an overlay of spoken words by each member.

So Percussion, it seems, has been an influence on Sandbox, evident when Chatter gave way, without pause, to What the Hell, by So Percussion’s Jason Treuting, Here the audience was encouraged, on a certain cue, to play any found object of choice. For most this was the car and house keys. A few audience members banged on the edges of their seats.

The keys were jangled as the fifth instrument in the ensemble. What at first sounded like a sonic intrusion, evolved into bright cluster of continuing, irregular tones that lasted for the length of the piece. This had two effects. It took the audience out of the piece — since jangling keys for more than a minute can be a taxing affair. It was also a moment of self-awareness about found objects and their potential as colorful, percussive instruments. 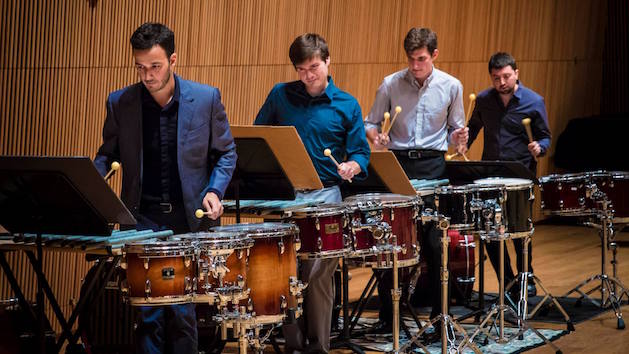 The highlight of the concert was a short work by Sandbox’s Jonny Allen, titled Sonata. This tonal work was both hypnotic and resonant, with the vibraphone supplying a bluesy, descending line allowing other instruments to become the musical decoration. At the end, all the musicians came together on the vibes in an interplay of mallets and hands striking the instruments.

In David Crowell’s four-movement Music for Percussion Quartet, the ensemble was charged with capturing two landscapes — New York City and Alaska. In the Alaska movements, cello and violin bows were slowly and lovingly rubbed on the plates of the vibraphones and marimba to evoke the solemn and pristine Alaskan wilderness.

Unlike many concerts that have been given at this new music festival — which is in its 39th year — this concert had a fair smattering of young audience members in attendance. These were not young adults, but preteens. They sat in rapt attention throughout, and at intermission one of the younger ones asked for, and got, and autograph from one of the Sandbox Percussion members.

How often does that happen in a new music concert? Perhaps Sandbox Percussion and groups like it have arrived at a key point in creating a new audience for contemporary classical, American music.