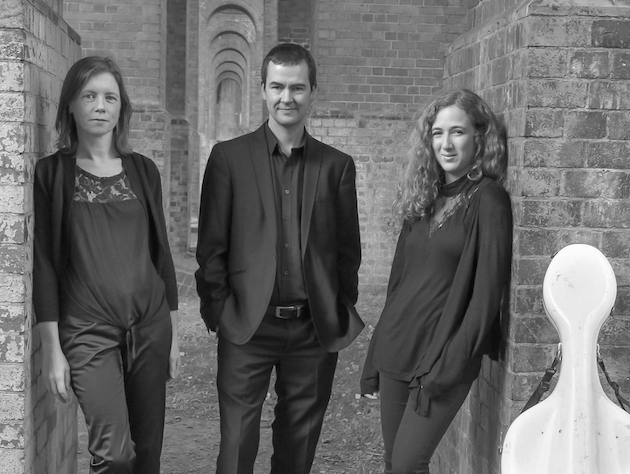 Sometimes the best way into a work is from outside looking in. That was the case when the Fidelio Trio tackled four works of new American music at the Festival of New American Music on Wednesday evening.

Certainly the Fidelio proved that they are keen on such works as it revealed Wednesday at the festival's home base at Sacramento State University. But they did more than that — they proved they're astute, top notch interpreters of new works.

The trio from Ireland, comprised of violinist Darragh Morgan, cellist Deirdre Cooper, and Mary Dullea on piano, was a last minute addition to this 10 day festival, which ends Sunday.

Their eagerness to fly down to Sacramento for a quick one night detour to their West Coast tour speaks to the high regard the festival is held in new music circles.

Booking the group last minute proved a coup for this festival as the Fidelio gave a powerful but nuanced interpretation of new works by Charles Wuorinen, John Harbison, Elena Ruehr, and Evan Ziporyn, with the last two composers in attendance.

This ensemble is all about a straight-ahead approach; and they make what they do look all-too-effortless.

The Fidelio Trio is all about a straight-ahead approach; and they make what they do look all-too-effortless.

This was evident in Wuorinen's delectable Piano Trio from 1983. The Fidelio has a close relationship with Wourinen and it showed. Wourinen's one movement work is a melodically powerful, intense work, whose forward momentum blooms when played with clarity. The Fidelio were more than eager to provide it. There was no drama in this 10-minute work that was not earned, and the impression was of music that was unequivocal and resplendent — like watching a a sunrise and getting the feeling you were watching one for the first time, despite having seen many.

Harbinson's Trio II, written in 2003, was a more descriptive work, with a wider musical pallette of ideas to work from. This four movement work saw some virtuosic playing, especially the clear and precise violin of Morgan, and Dullea's work on the piano, in the first movement "Tale." There's much interplay in this work and nowhere more evident than in the third movement "Rumors." This was handled with a deft touch by these three musicians.

The most lyrical work on the program was a work written in 2007 by Ruehr titled Blackberries. Here we see the shift with new music writing — where new music moves into poetic and introspective territory. The work is based on a poem — one written by Ruehr's daughter. The poem describes a sunny day moment amid a blackberry patch in a Cape Cod bog.

Ruehr has written a painterly work here that captures a single moment — it's a deeply touching one. The work, originally written for clarinet, cello, and piano got its violin, cello and piano world premiere on Wednesday. The one movement one work is a fantasy — and demands its musicians play with painterly expression. This was a big change in music focus from the two pieces that came before. The Fidelio were up to the task.

The last piece was the most tonal and the longest offered on Wednesday evening — Ziporyn's Typical Music, from 2000. The three movement work fulfilled Ziporyn’s desire to return to a more “classical” approach. Ziporyn is best known for his work with Bang on a Can and also for his work with the gamelan.

With Typcial he certainly begins things within a balmy tonal environment. The music revealed Ziporyn’s desire to mine a certain lyricism — one with a jazz tinge. The second and third movements proved less tonal.

The work, as a whole, felt about a half a movement too long. Many of the musical ideas where repeated, especially in the third movement. At times the ideas felt redundant. In certain sections of the last movement there was a lot of layering of sound, when less would have been a more provocative idea. Throughout, the Fidelio musicians stayed true to Ziporyn’s eclectic style.